Hello!  Thank you for popping in.  Today I am dancing an excited little happy dance because... the temperature has dropped to a much more comfortable 22 degrees and when I looked out of the window at 6 o'clock this morning it was raining for the first time in more than six weeks.  Yippeeeeeeeeeee!  The rain didn't last for long, only half an hour or so I think, but it meant that I didn't have to water the pots this morning and the air smells and feels fresher. 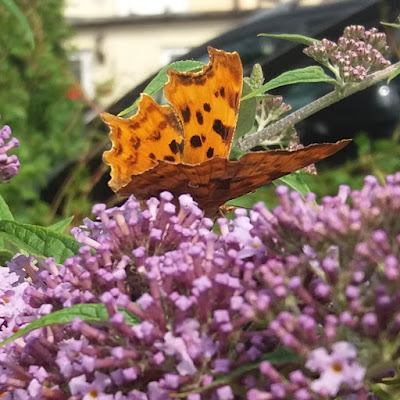 This seems to be Butterfly Week.  There are plenty of them fluttering about the garden and on Tuesday I was thrilled to see a Comma, a Small Tortoiseshell, a Peacock and a Large White all there at the same time.  I have rarely seen Commas in the garden so that was a special treat.  The buddleias and lavenders are in flower and they are welcoming lots of bees as well as the butterflies, which pleases me greatly.  Yesterday afternoon I was sitting in my summerhouse with the doors open, watching several Peacocks feeding on the buddleia, when I noticed large numbers of smaller flying insects rising up around them.  I sat there wondering what they were for a while and didn't work it out until I looked down: they were flying ants.  The patio was absolutely covered in them, it looked like a plague of biblical proportions, and they were making their way up the side of the terracotta pots before launching themselves upwards like helicopters.  I was fascinated.
I have seen flying ants before, but only airborne ones, and although I have heard of "Flying Ant Day" I didn't really know what it meant, so yesterday evening I looked it up.  The ordinary ants I had noticed crawling about the patio over the last week or so are female workers who collect food for the whole colony.  The flying ants are the males and young queens, who leave the nest en masse to mate, the queens then moving away to found their own colonies.  This so-called "nuptial flight" is what I witnessed yesterday (although I absolutely didn't see any veils or bouquets!).   Apparently there are likely to have been between 5,000 and 15,000 of them.  I didn't count but there must have been thousands.  Apparently, Flying Ant Day is thought to take place when a spell of wet weather is followed by hot, humid weather but we haven't had the wet spell and although it's been hot, it hasn't been particularly humid here so I suppose the ants just got fed up of waiting.  It did occur to me that there was a time when I might have been freaked out by the sight of them, but I wasn't, I was inside the summerhouse and they were all outside, trying to fly away.  I pictured myself watching with Tom Kitten in a few years time and explaining it to him.
Having said that, I would rather be watching butterflies!
See you soon.
Love, Mrs Tiggywinkle x
Posted by Mrs Tiggywinkle at July 12, 2018