Hello and thank you for calling in.  Thanks, too, to those of you who left comments on my last post - it is so nice to know that I am not the only grown-up in the world who loves shells!  I do have some more, collected on Sanibel Island in Florida in 1999 and still carefully wrapped in newspaper and stored away.  Maybe I should give them an airing?
One of my hobbies is researching my family history and I would like to share some of that with you here occasionally.  There is nobody famous or grand in my family tree, I come from a long line of what my mother calls "good peasant stock", labourers both agricultural and industrial, but to me they are all interesting.  What were their lives like?  Why did they move from country to town?  How much of them can I find in myself?

Alice Stapleton was born in March 1861 at 5 Brady’s Place, Greycoat Street in Westminster, right in the heart of London.  She had an elder sister, Mary Ann, named after their mother, and it seems that her parents, Mary and Benjamin, a stonemason's labourer, had trouble choosing another girl’s name because when the national census was taken eleven days later, the space for her name was left blank and she is simply recorded as a Daughter, aged 2 weeks!  She was eventually registered as Alice on 29th April.


A younger sister, Caroline, was born four years later and in 1866, when Alice was 5 years old, her father died, leaving 28 year-old Mary Ann to bring up their three daughters alone.  Mary Ann got a job as a “Charwoman”, a cleaner.  Her life must have been hard – but there must also have been some fun because four years later, she gave birth to a baby boy!
On Christmas Eve 1879, Alice married a young waiter named Thomas Edward Green at St Margaret’s Church in Westminster, a church which crops up on both sides of my family tree.  I have an old postcard of the church – 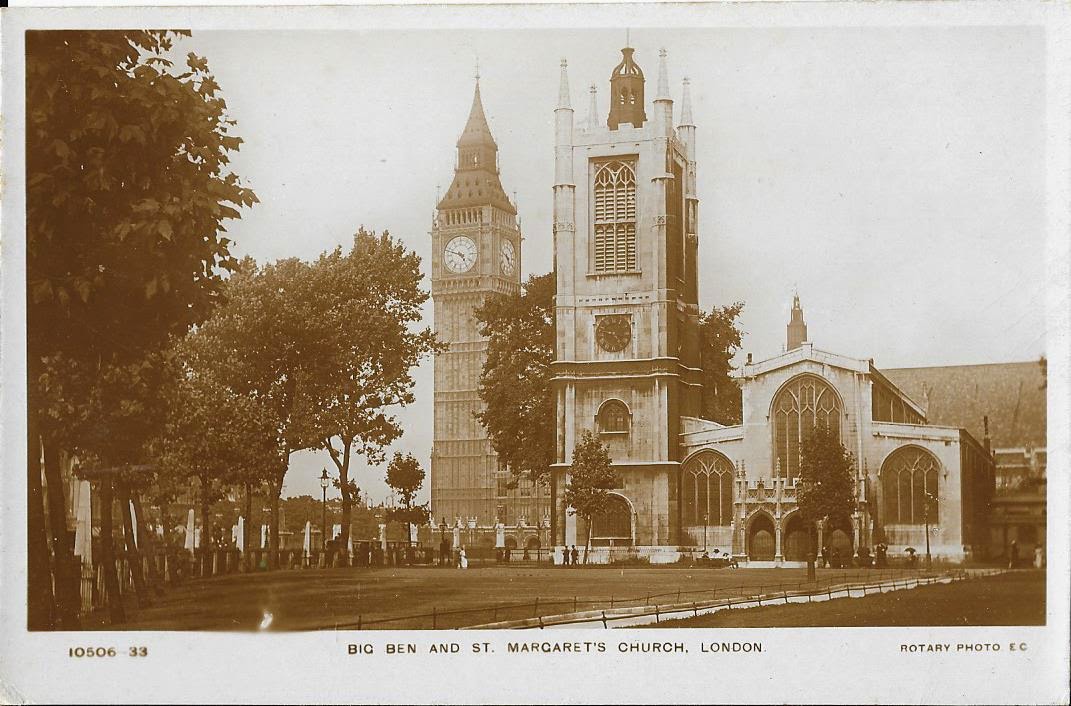 Can you see Big Ben?  Yep, this church is right next to the Houses of Parliament.  Alice was 18 years old but lied about her age as the marriage certificate states that she was 21 – perhaps she lied to get round the requirement for parental consent, necessary for under-21s at that time?  The 1881 census records that Tom was working as a “Liftman (Domestic)” – presumably that means that he operated a lift?  (The last time I went to Liberty’s in London there was a man whose job was to operate the lift.  It’s a sort of obsolete occupation now, I suppose.)  Soon after that, the couple settled down to the business of having children: Thomas, Albert, Arthur and Caroline in the next ten years, by which time Tom’s widowed mother was also living with them.  This family of seven people lived in 4 rooms in a property in Walthamstow, supported only by Tom’s wage as a labourer.  Life must have been very hard – no housing benefit, tax credits or child benefit then!  Then two more daughters came along, Mary and Jane (known as Cissy), before Tom died in 1896.  So, there was Alice, widowed at the age of 35 with 6 children to feed.  Life had got considerably harder.


So what did a woman do in the days before the welfare state if she was widowed and had dependent children?  She found another husband, that’s what she did!  Three years later she married 46-year-old James Huckle and you know what comes after a marriage...a baby.  Jim was named for his father.  A year later, Alice reached her 40th birthday.  And sadly, a year after that, Alice was widowed for the second time.  But she wasn’t done yet: a year later, at the age of 42, Alice had another baby, Evelyn.  Goodness knows who her father was.


The 1911 census records Alice living with 6 of her children in 6 rooms in a property in Hackney in East London.  Arthur was working as a bricklayer and Carrie, Mary and Cissy were working in a laundry so there were 4 wages coming in.


Alice didn’t marry again.  In the days when a woman supposedly needed a man to “look after” her she had been left by her father and two husbands.  She must have been tough.  A woman born in 1861 had a life expectancy of about 40 years but Alice died in November 1941 at the age of 80.  See what I mean?  Tough.  She was buried in Abney Park Cemetery in Stoke Newington, where her daughter Caroline had been buried two years earlier. 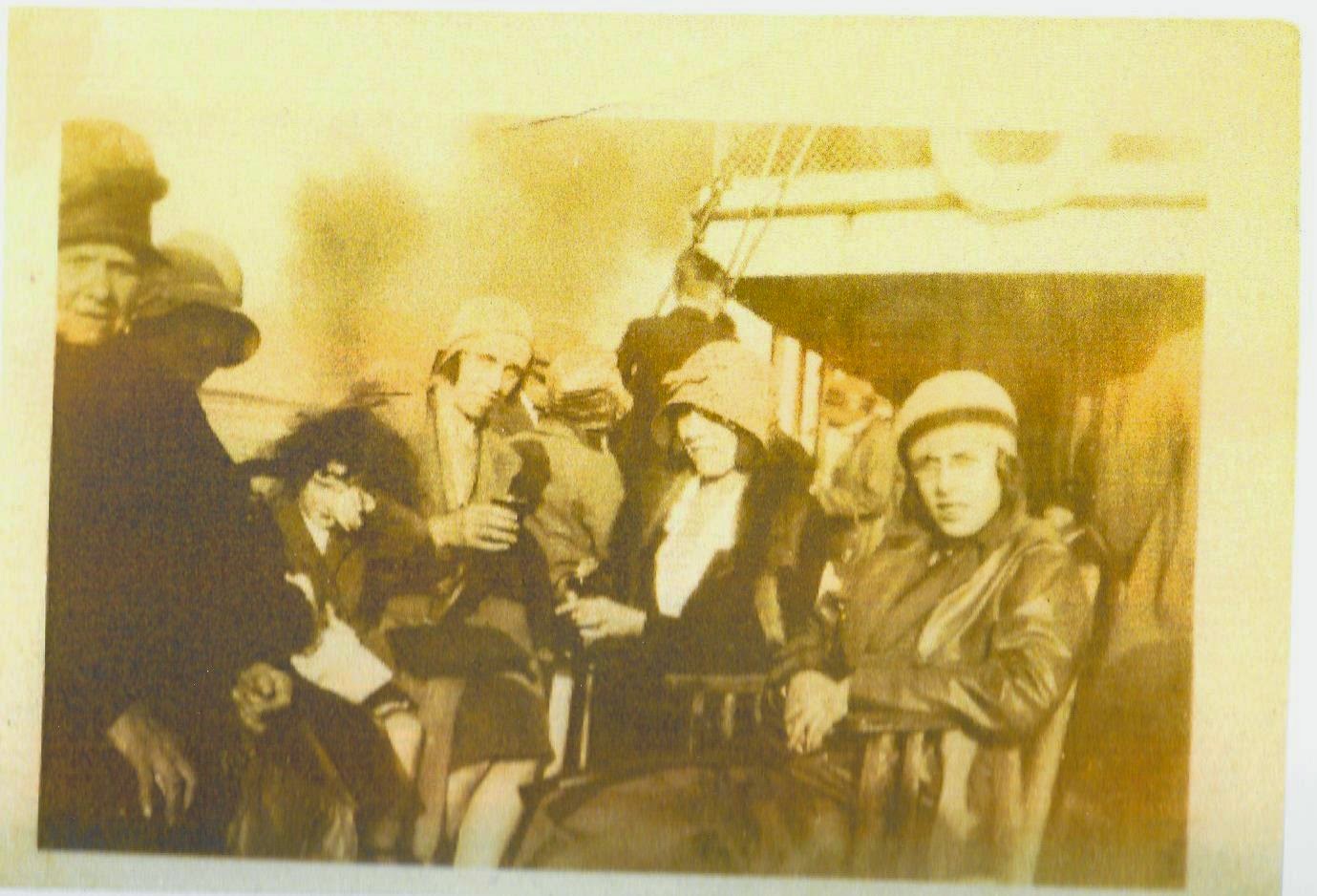 This photo was taken in about 1930.  There’s Alice on the left, the woman in the middle is her daughter Caroline, next to her is Evelyn and finally, on the right, is Caroline’s daughter Julie, my Nanny.  What fabulous hats!


So there you are.  An ordinary life, nothing spectacular, the kind of life that millions of women born in the Victorian era must have had.  Her father died when she was 5 years old, she was widowed twice before she was forty, she was poor and she brought up eight children in circumstances we can’t really imagine, but that’s what life was like.  She lived through the reigns of five British kings and queens, the discovery of the South Pole, the first aeroplane flight, the sinking of RMS Titanic, the First World War,  the first two years of the Second World War and incredible social and industrial change.