Hello and welcome to my Shropshire patch, especially if you are here for the first time.  Today I am again joining in with Amy at Love Made My Home  with Five On Friday so you might like to pop over there and see who else is joining in this week.


We have had glorious weather here this week, blue skies and warm sun, and it has set me hankering for the seaside.  If you have called in here before you may already know that although I live a long way inland, I love the coast, so while I am here today weeding the garden I shall be thinking about these beaches, any one of which I would visit again in a heartbeat.
1. Kippford

When The Mathematician was 12 years old we rented a house in the southwest of Scotland for a holiday and by the time we left, a week later, we were all a bit smitten with Dumfries and Galloway.  One warm, sunny day we drove the car to the seaside village of Rockcliffe, parked it there and then walked along the Jubilee Path to Kippford.  This is what we saw when we got there - 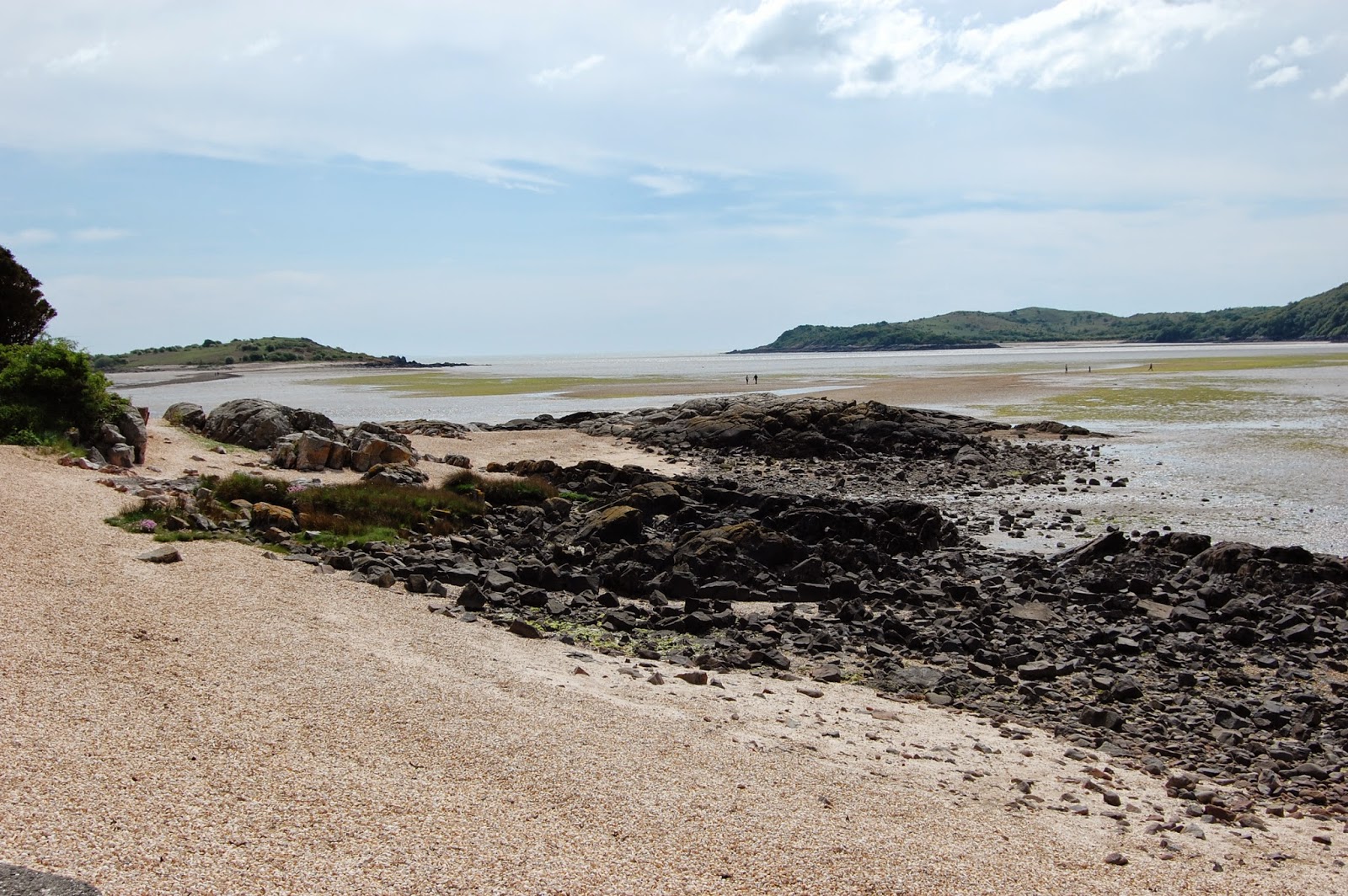 Would you like a closer look at the beach? - 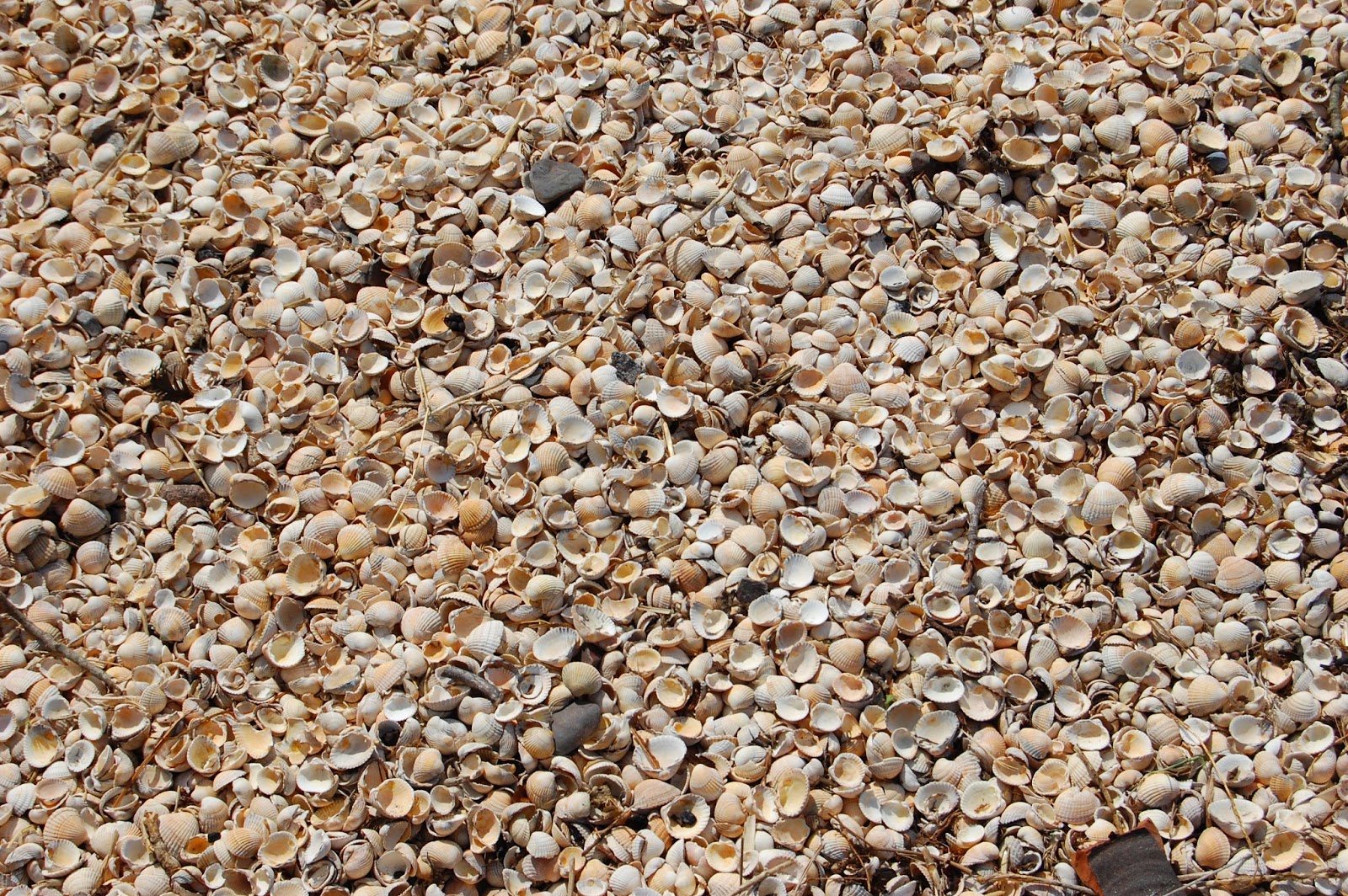 Yes, the beach was entirely comprised of shells!  I didn't want to walk on it for fear of crushing them, but there was nowhere else to walk.  We were not the only people enjoying the view that day - 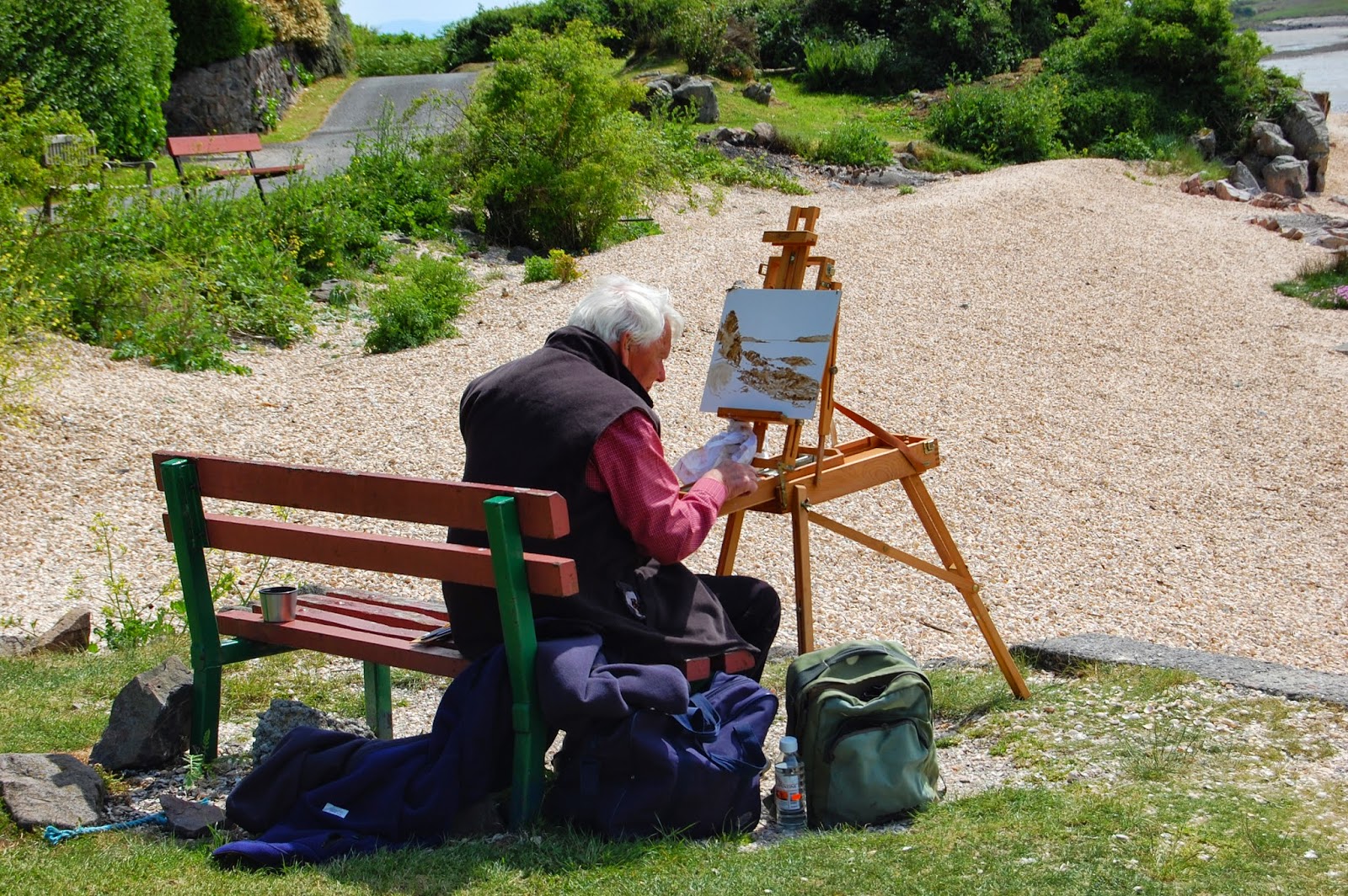 2. Vik
A few years ago I inherited a modest legacy from a dear aunt.  I decided to spend some of it on a special holiday, something we would always remember and say, "God Bless Auntie Peggie," so that her memory wouldn't fade, so we went to...Iceland.  There was method in our madness: as the Best Beloved is a teacher we could only go in August and neither The Mathematician nor I can cope with very hot weather, so our options were more limited than most people's.  It turned out to be a spectacular holiday, and this beach is one of the reasons why.  Vik is the southernmost village in Iceland and its beach has been voted one of the ten most beautiful on earth.  Shall I show you? - 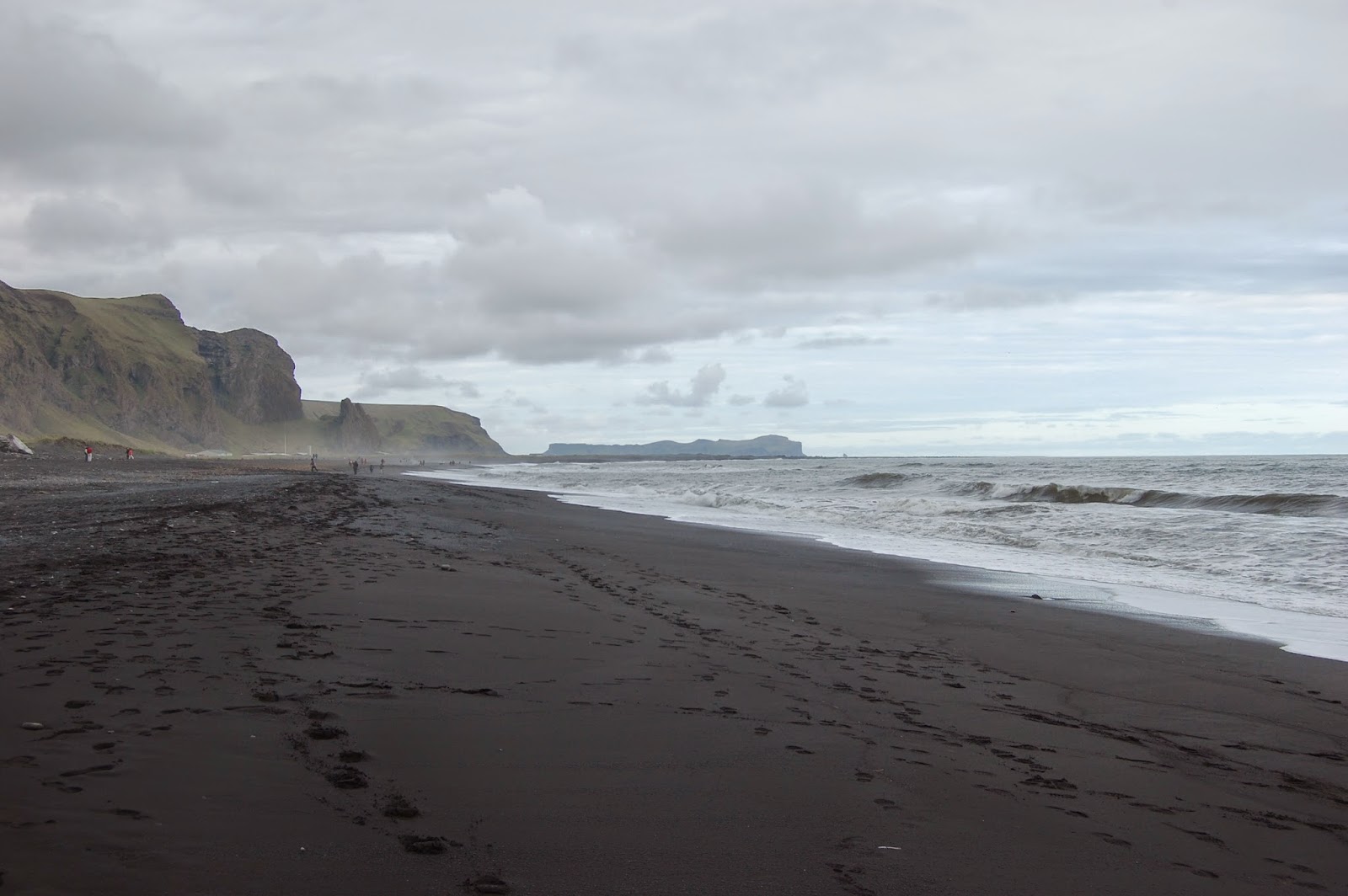 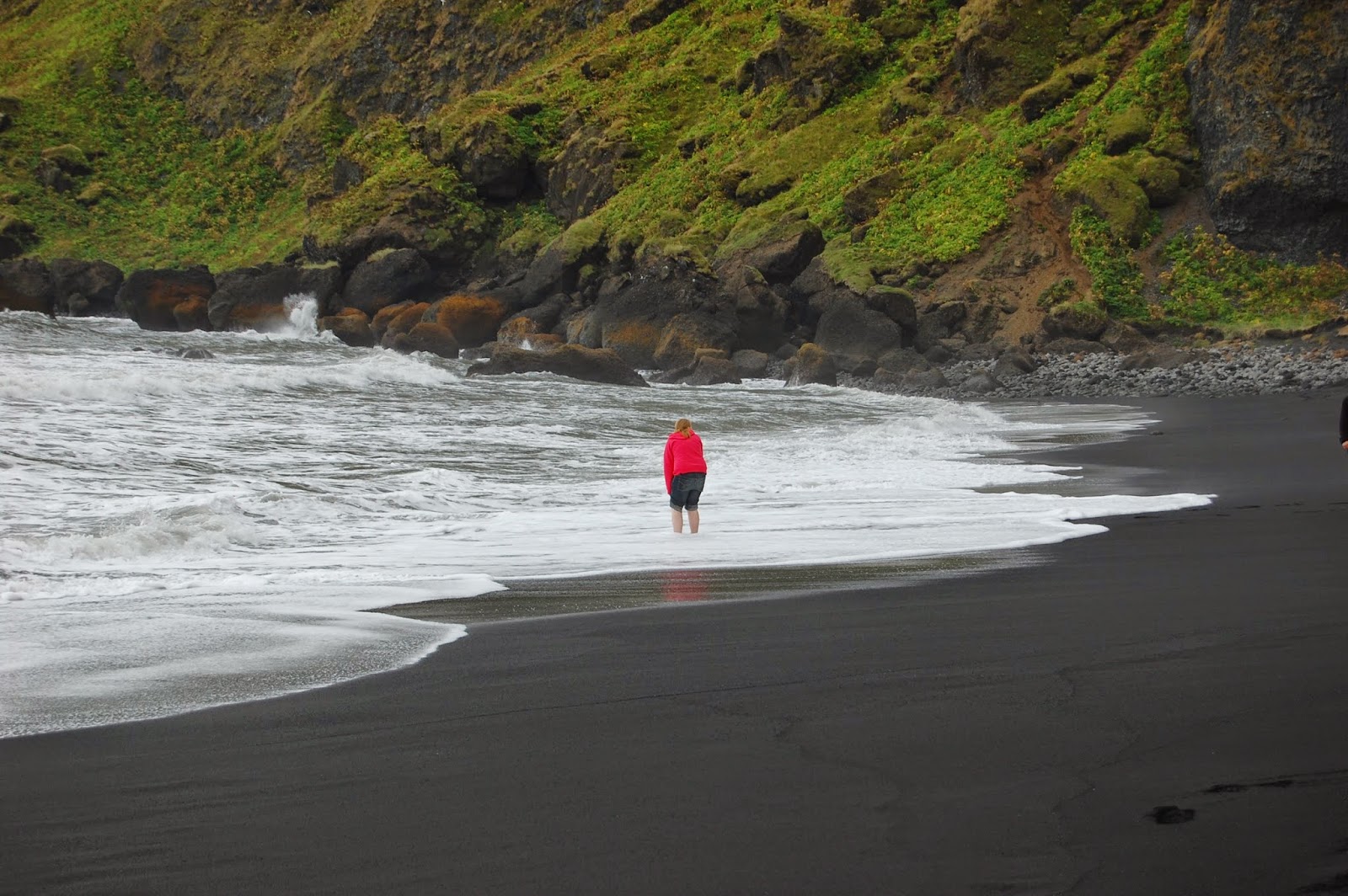 White waves crashing onto black, basalt sand.  As I said, spectacular.  I have a tiny glass jar full of that sand on the dresser in my kitchen.

3. Aberffraw
I had been feeling very low for several months so during the October half term that year, the Best Beloved and I took advantage of the fact that our children were elsewhere and booked a cottage in north west Wales for a long weekend.  On the Saturday we drove over the Menai Straits to Anglesey, to Aberffraw in the west.  We parked in the village, by the old bridge, and walked along the estuary to the beach.  This is the very special thing about Aberffraw: you can't drive to the beach and you can't see it until you are on it, either walking along the estuary or over the dunes.  This particular day in October was very sunny and windy and when we arrived, it took my breath away.  The sun was sparkling on the water, there were kite-surfers performing great stunts and there was a big, wide, curving, golden, sandy beach held between two green headlands.  It was amazing.  My spirits lifted that day, and Aberffraw has become a place we go to whenever we can.  It is very special and I find it healing and restorative, even in February when it's cloudy and cold.  Oh, and there are great finds there for beachcombers, especially after storms.  (Heart sea urchins, anyone?  Dead porpoise? - I wasn't even tempted to bring that home.) 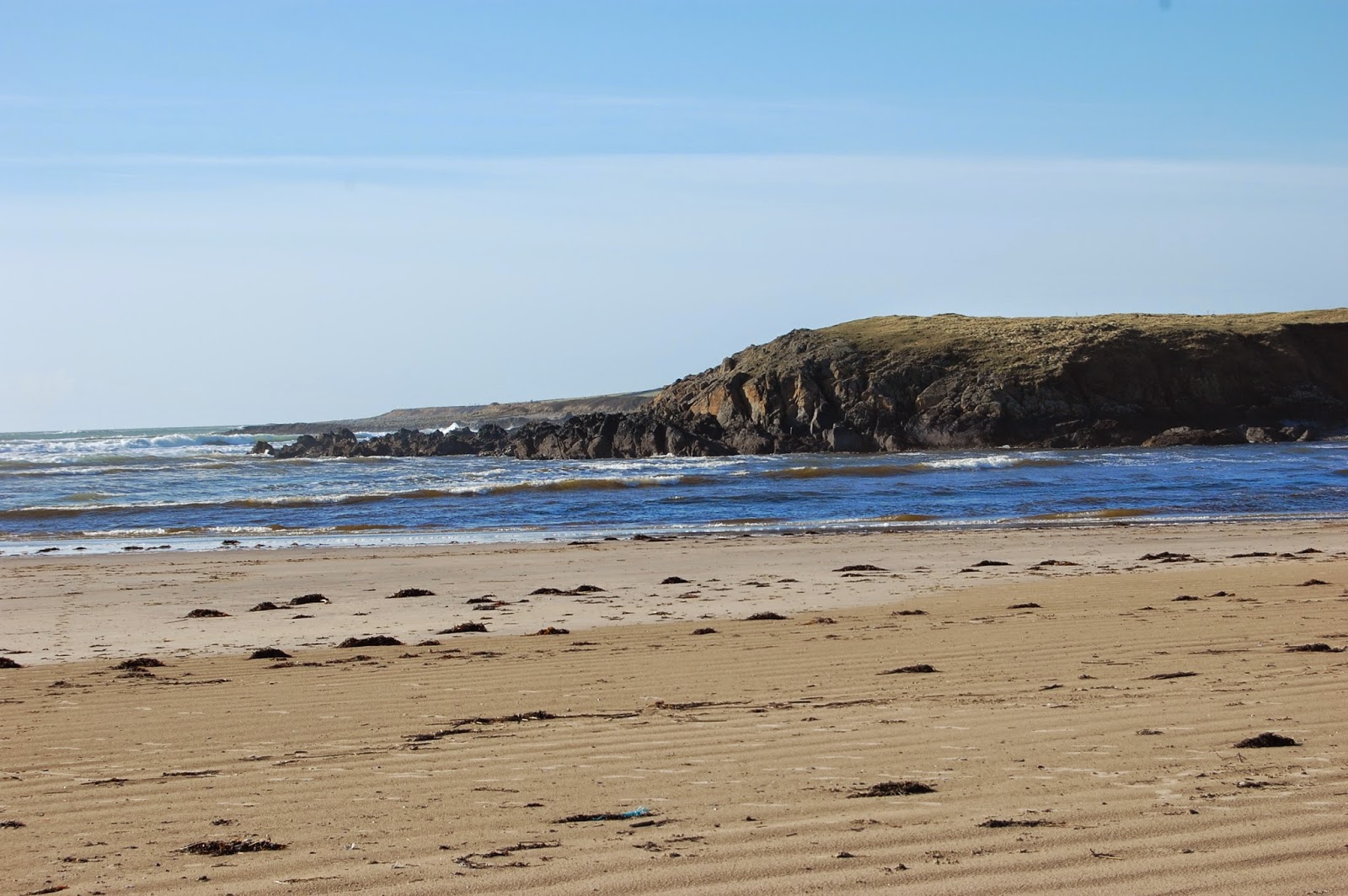 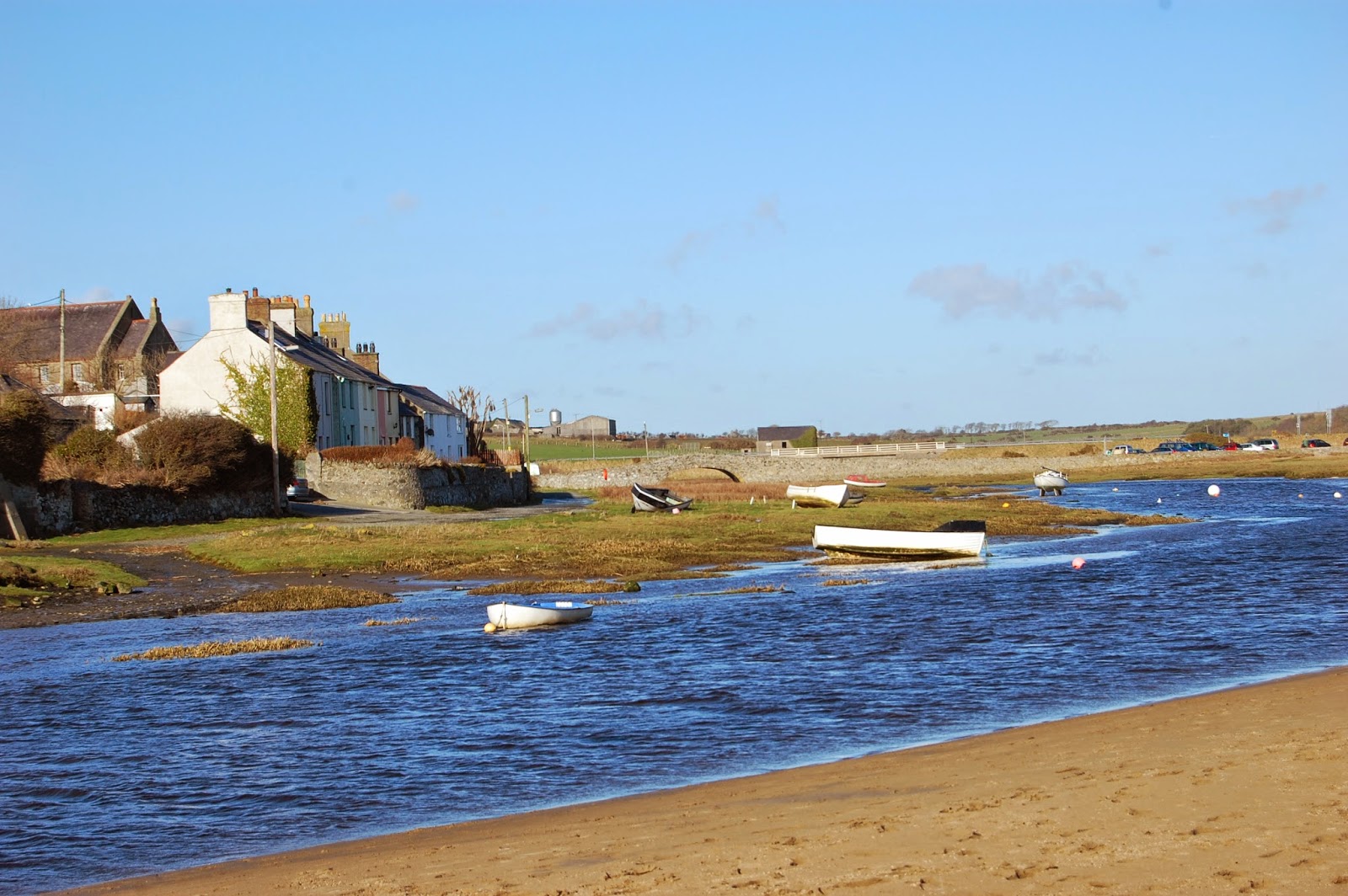 4. Cayton Bay
Cayton Bay is on the North Yorkshire coast, a few miles south of Scarborough, which is unusual for us because we usually head west rather than east.  It is very popular with surfers,  of which I am not one, but I am a beachcomber and there are fossils here - it's a Jurassic coast, like Dorset.  There is also lovely golden sand.  We spent a lovely, lazy afternoon here a few years ago while camping nearby and confronted my unfounded prejudices about the North Sea - I had no idea it could be so blue. 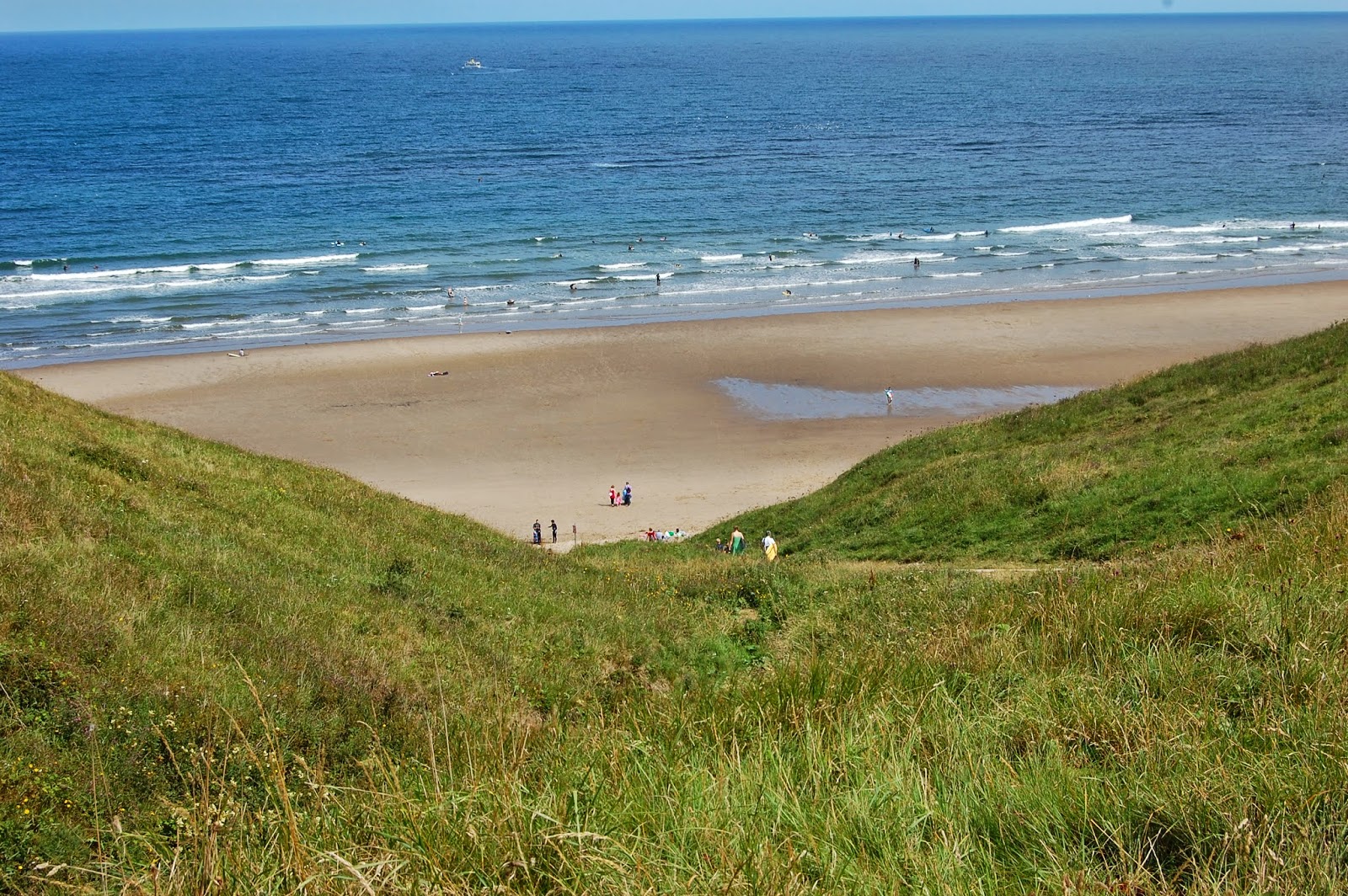 5. Ogmore-by-Sea
Ogmore is in south Wales and we sometimes go there when we visit my family in Cardiff.  It is a fascinating place for geologists, there are fossils to be seen in the carboniferous limestone rocks (on my mantelpiece I have an ammonite which I found there) and, when the tide is out, a vast expanse of golden sand.  It's also where we first showed The Teacher hermit crabs scuttling across the rocks.  In October 2012 I thought I had found a piece of ambergris there, ambergris being biological matter which comes out of one end or the other of a sperm whale and being very valuable to the perfume industry.  The Best Beloved, never having heard of it, didn't believe me and was most anxious that none of us should touch it because he thought it was a petrochemical product washed up from the oil refinery along the coast at Milford Haven, so we left it on the beach.  Three months later we saw in the news that a man and his dog found a large piece of ambergris on Morcambe Beach which was estimated to be worth £100,000 and seeing it, the Best Beloved realised that I was right (ha!).  It's the one that got away... 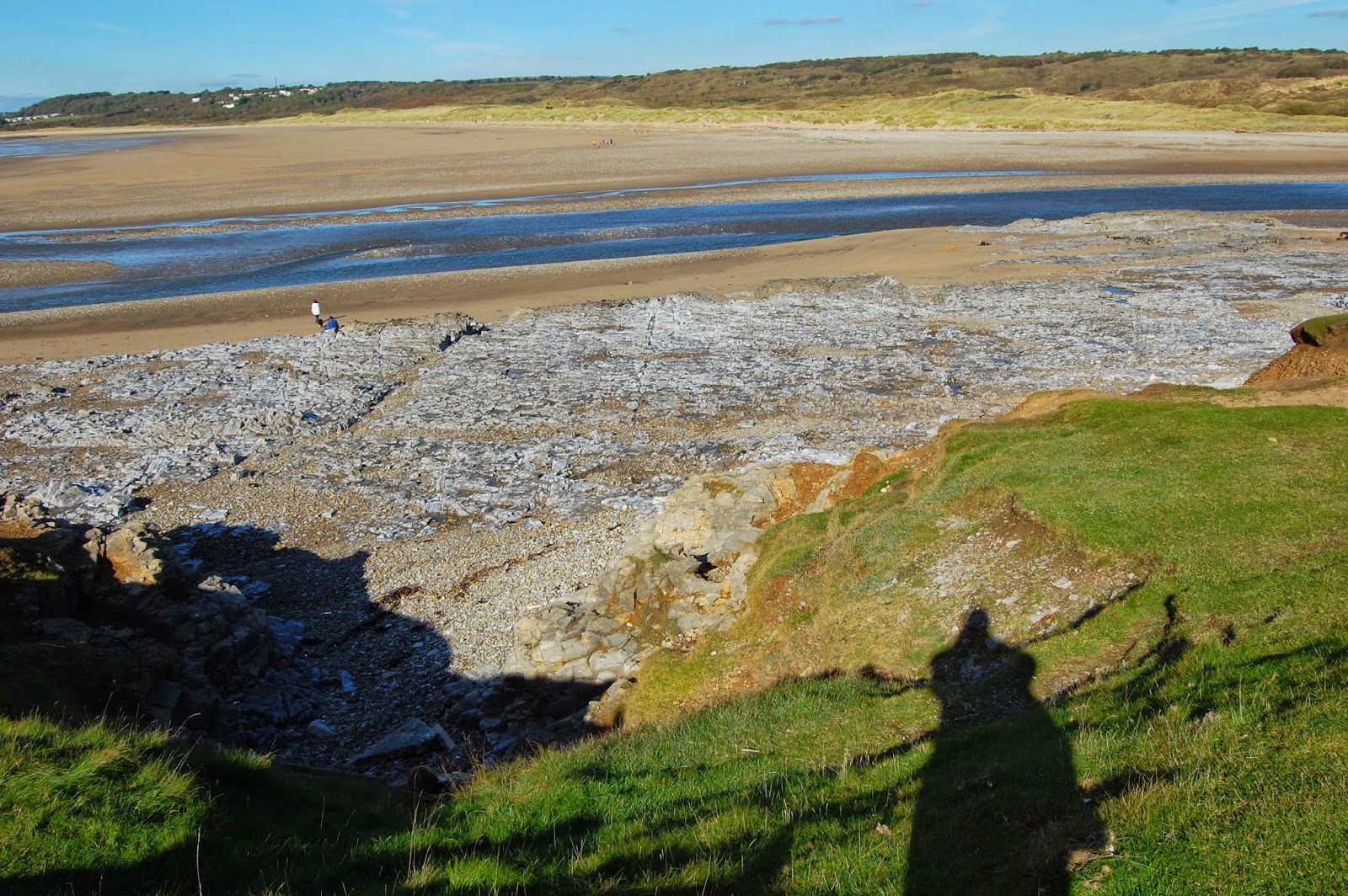 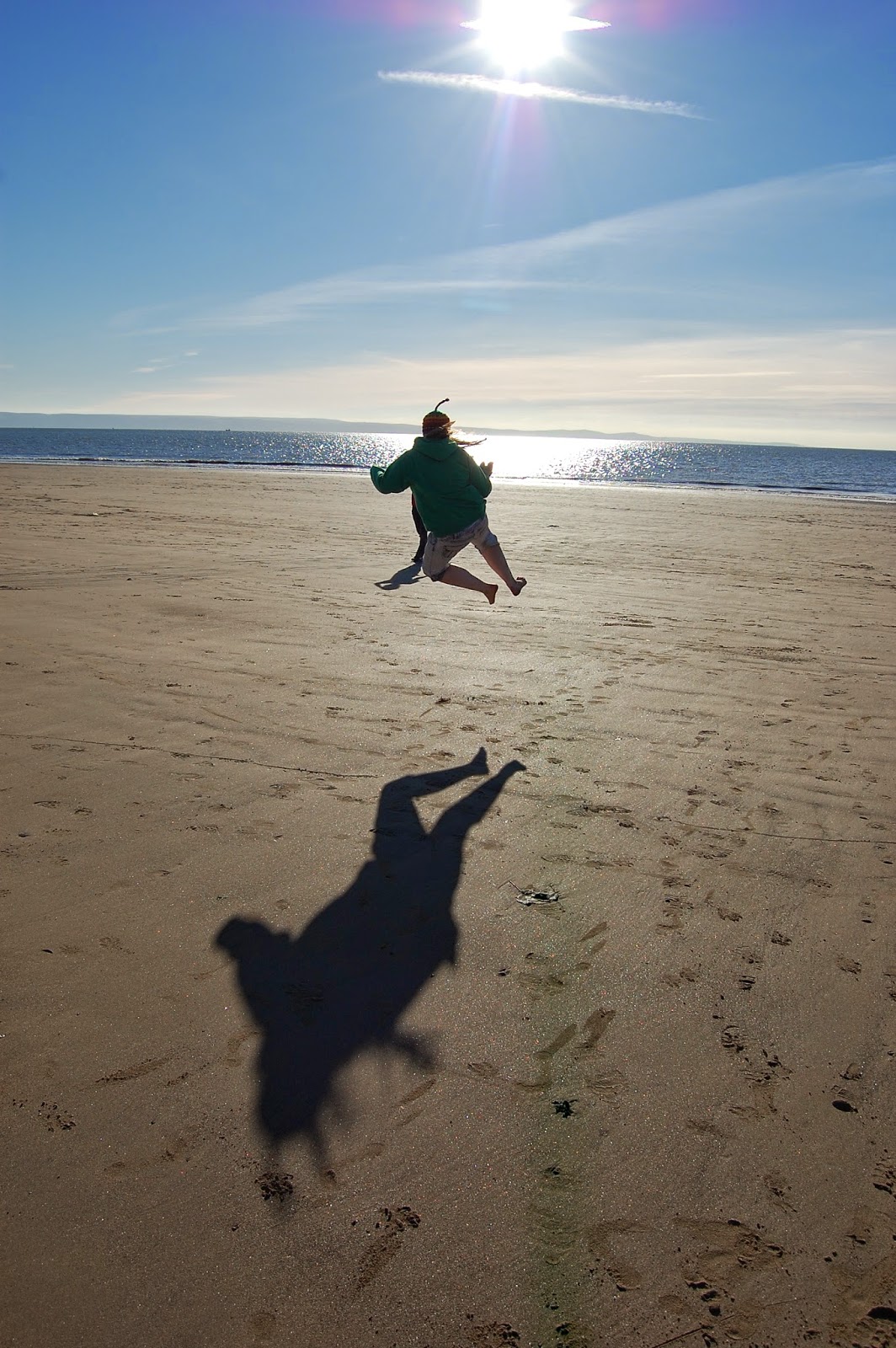 That's The Mathematician, doing her little dance of joy in October 2010.
Just looking at these pictures gives me so much pleasure.  I do hope you like them too.  Thank you, Amy, for giving me this opportunity to share them.
Love, Mrs Tiggywinkle x
Posted by Mrs Tiggywinkle at April 10, 2015