The Only Two Left In The World

Hello, thank you for dropping in and thanks especially to those of you who left comments on my last post, I value every one of them (and actually, we did have pasta for dinner again on Friday!).  Today I would like to take you on a little outing.  The Shrewsbury Canal was completed in 1797 and intended to link our county town with the coal mines and ironworks in East Shropshire, in the area now known as Telford.  It's a funny little canal because it was not designed to be used by narrowboats or barges but instead, the freight was transported on tub-boats which were about 20 feet long and no more than 6 feet 4 inches wide, little oblong boxes which were linked together in trains of up to twenty and pulled by horses on the towpath. So, the canal didn't need to be very wide and in fact its eleven locks are the narrowest of any canal locks in the country at only 6 feet 7 inches wide.  Special lock gates were designed for this canal by Thomas Telford, who later became the first President of the Institution of Civil Engineers, unique guillotine lock gates which lifted up and down on chains from a gantry rather than swinging open and closed conventionally.  The canal closed in 1944 and very little of it remains.  You have to go searching for the evidence, so I did, because I do enjoy a bit of industrial archaeology, poking around and putting the clues together to work out how things used to happen.  Would you like to have a look? 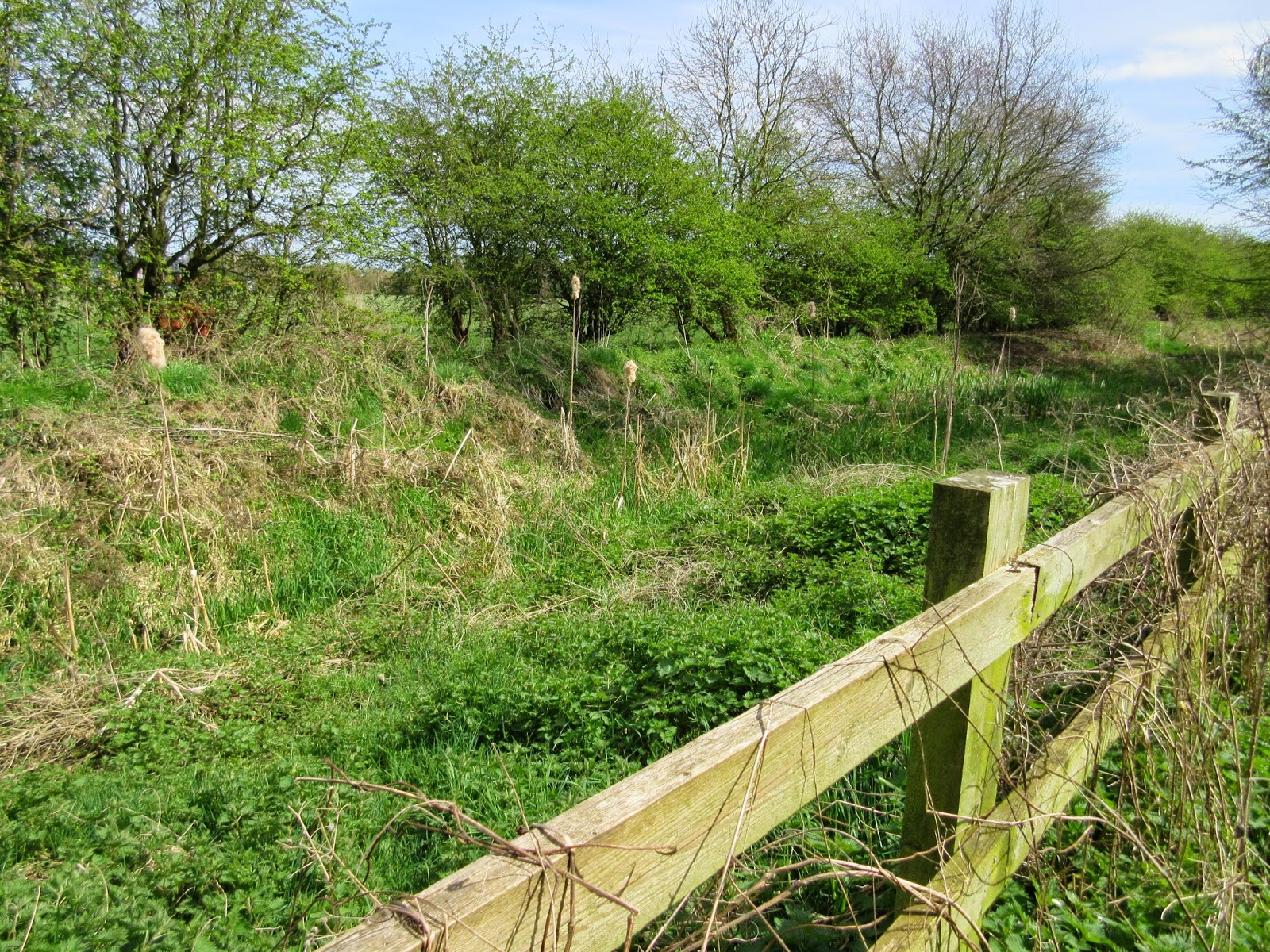 See what I mean?  Unless you know what you are looking for, you wouldn't really guess that there is a water course here, although the bulrushes are a clue.  But if you peer through the trees which have been planted on this side of the fence... 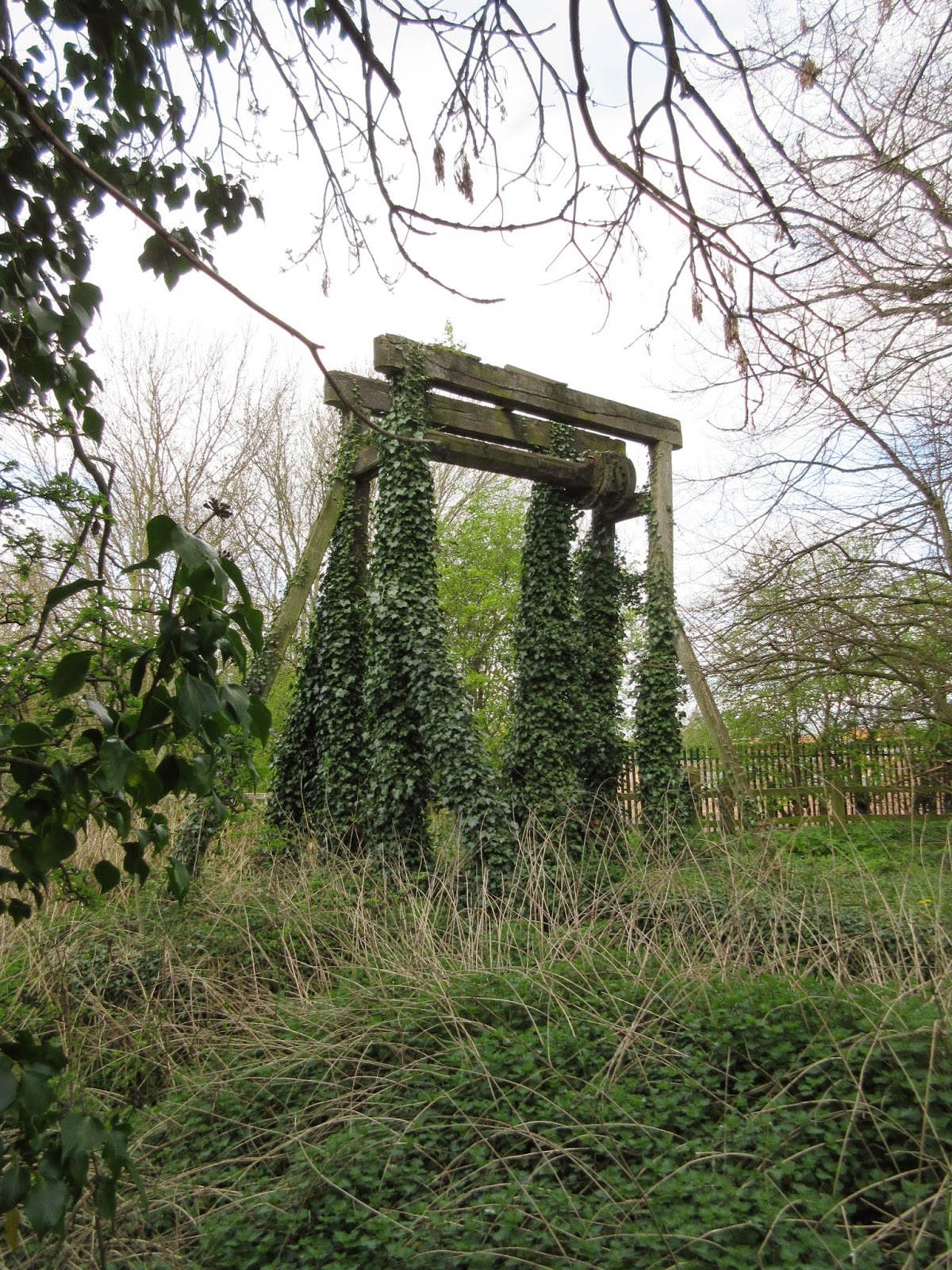 Aha!  A wooden gantry.  This is Hadley Park Lock.  Let's go and have a closer look... 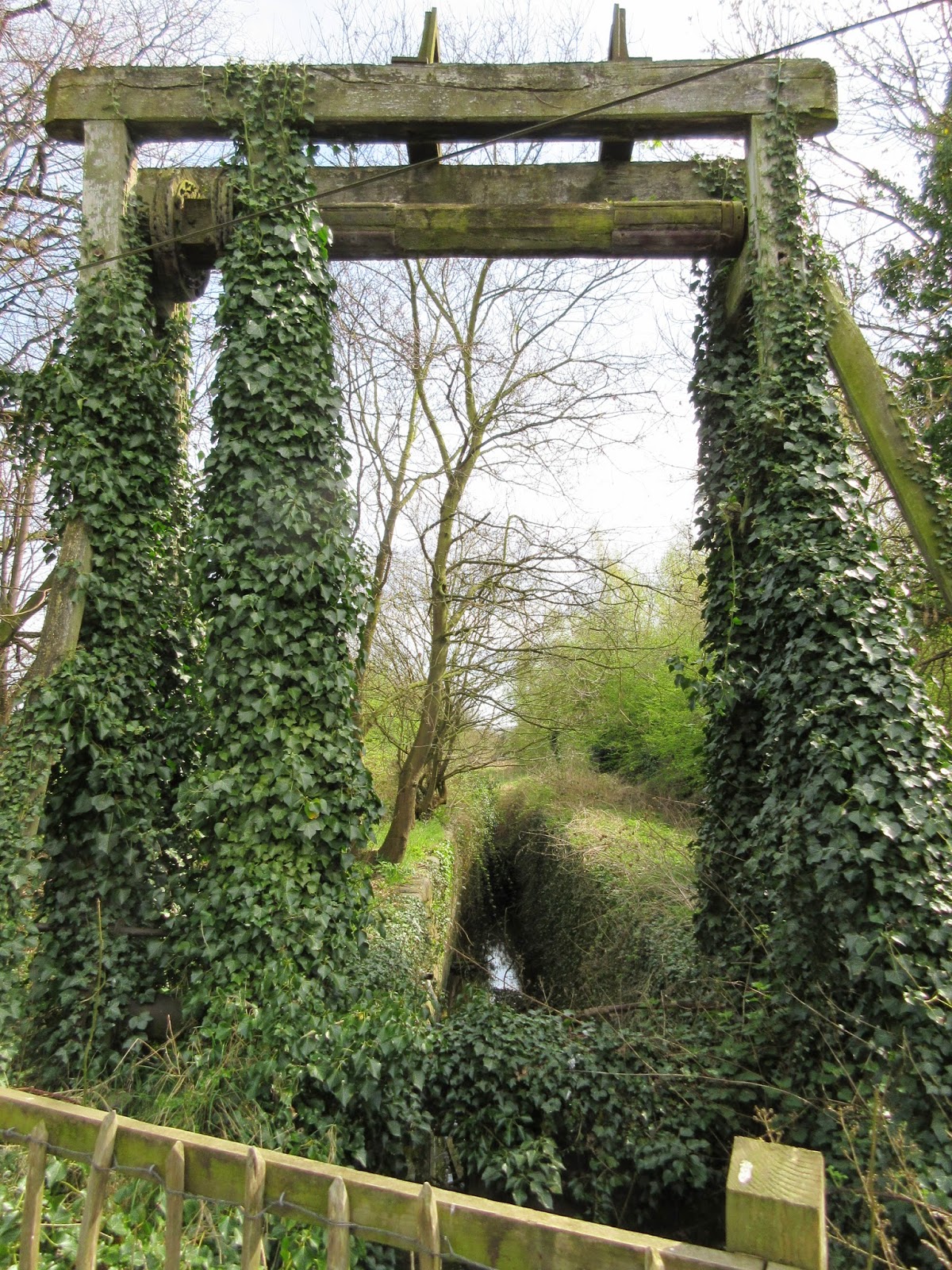 There is a bridge behind the lock and if you stand on it you can look down the length of the lock chamber.  If you look down, you can see what remains of the gate - 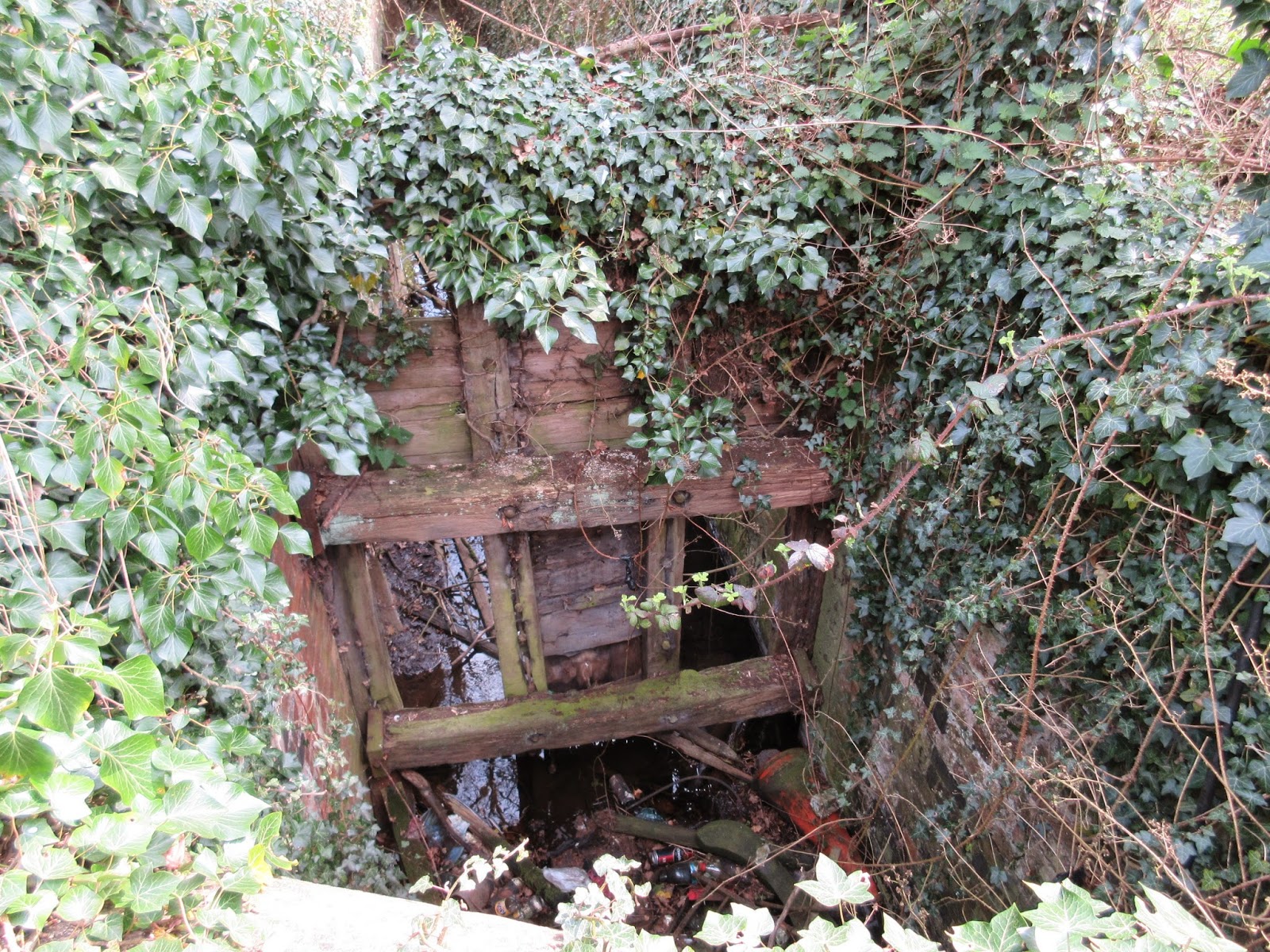 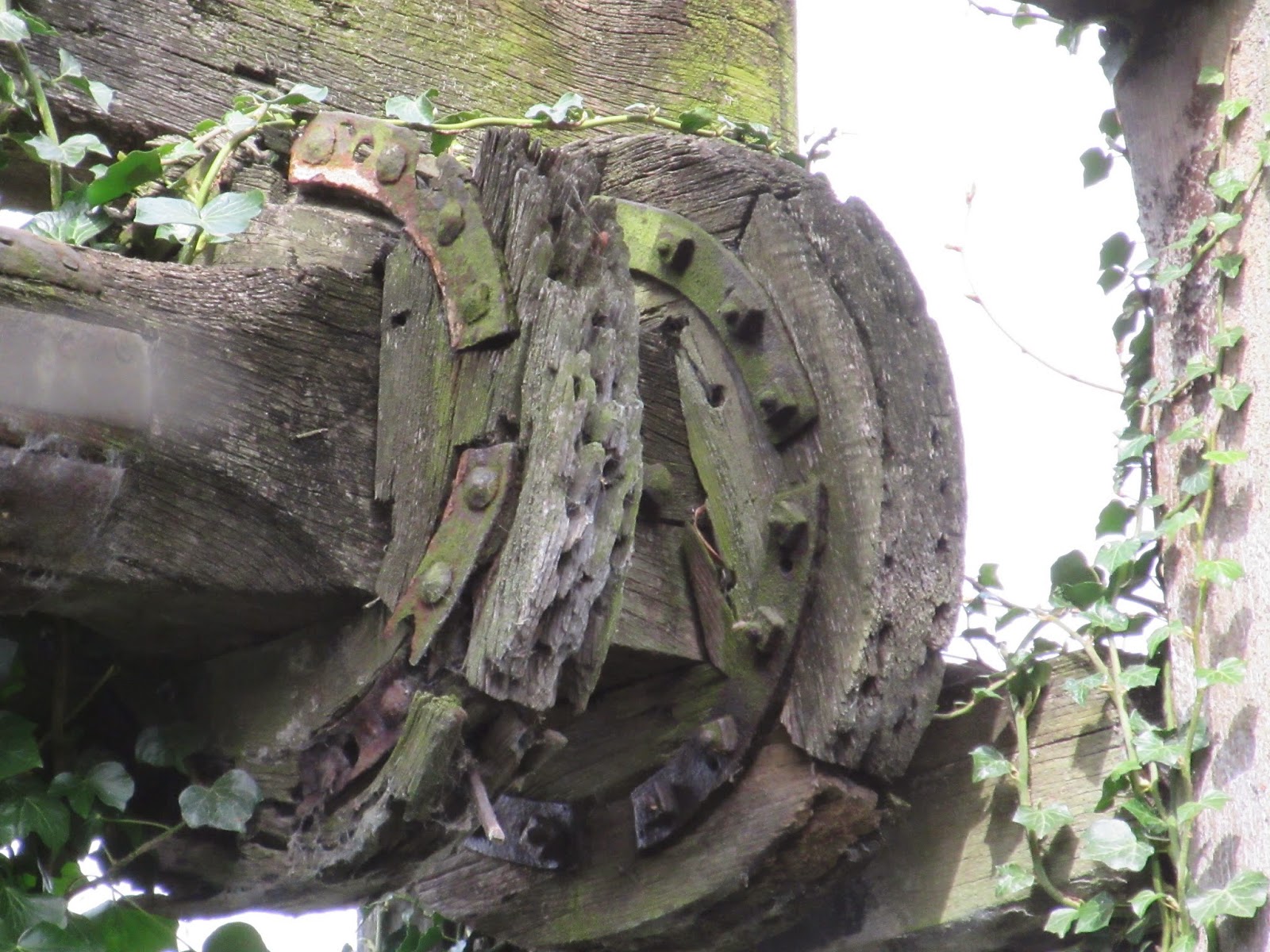 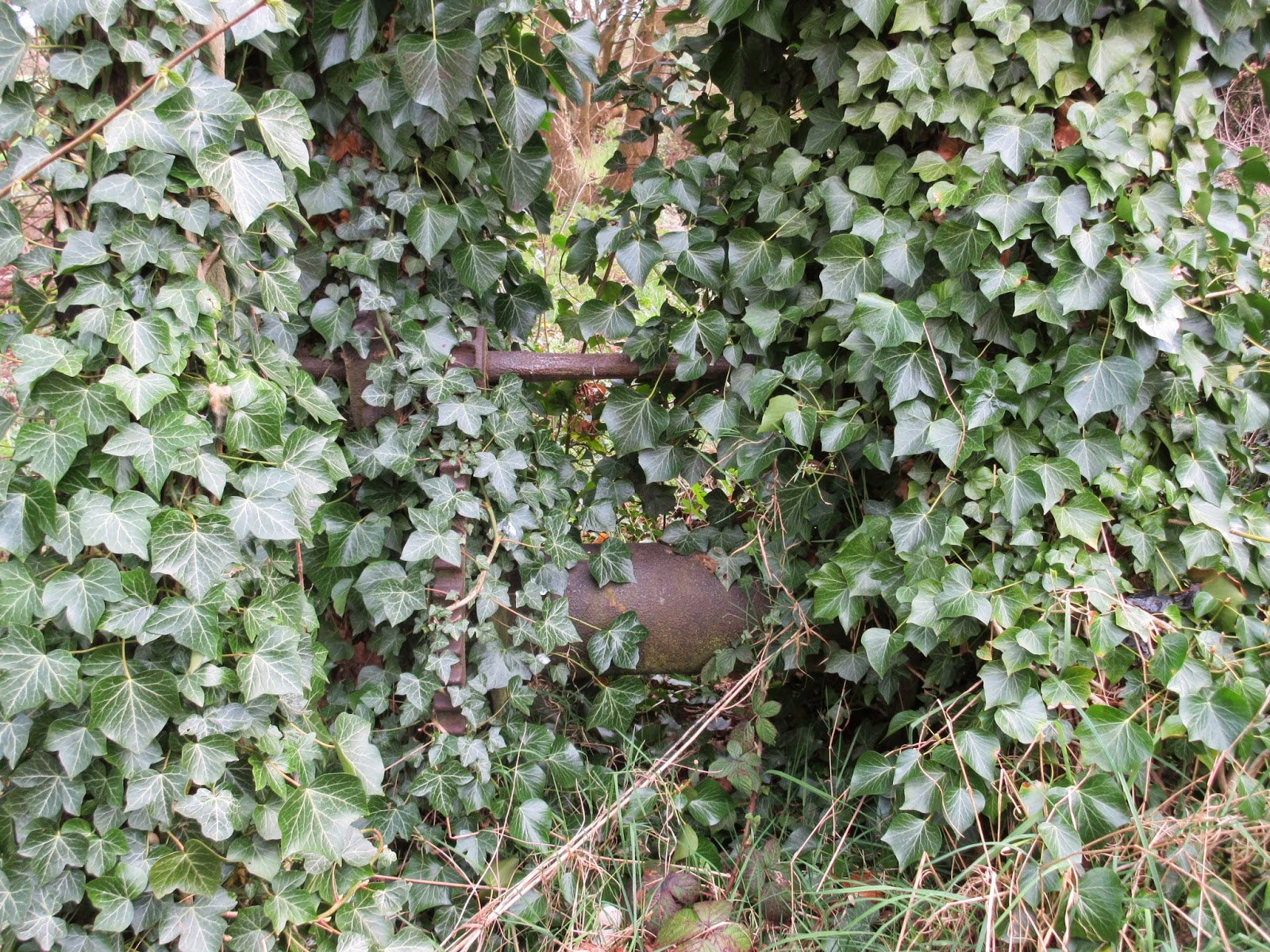 This gate is so overgrown and dilapidated that it's quite hard to see how it worked, but one furlong away (I'm a metric baby so I don't really know how far that is, but it's very close) - 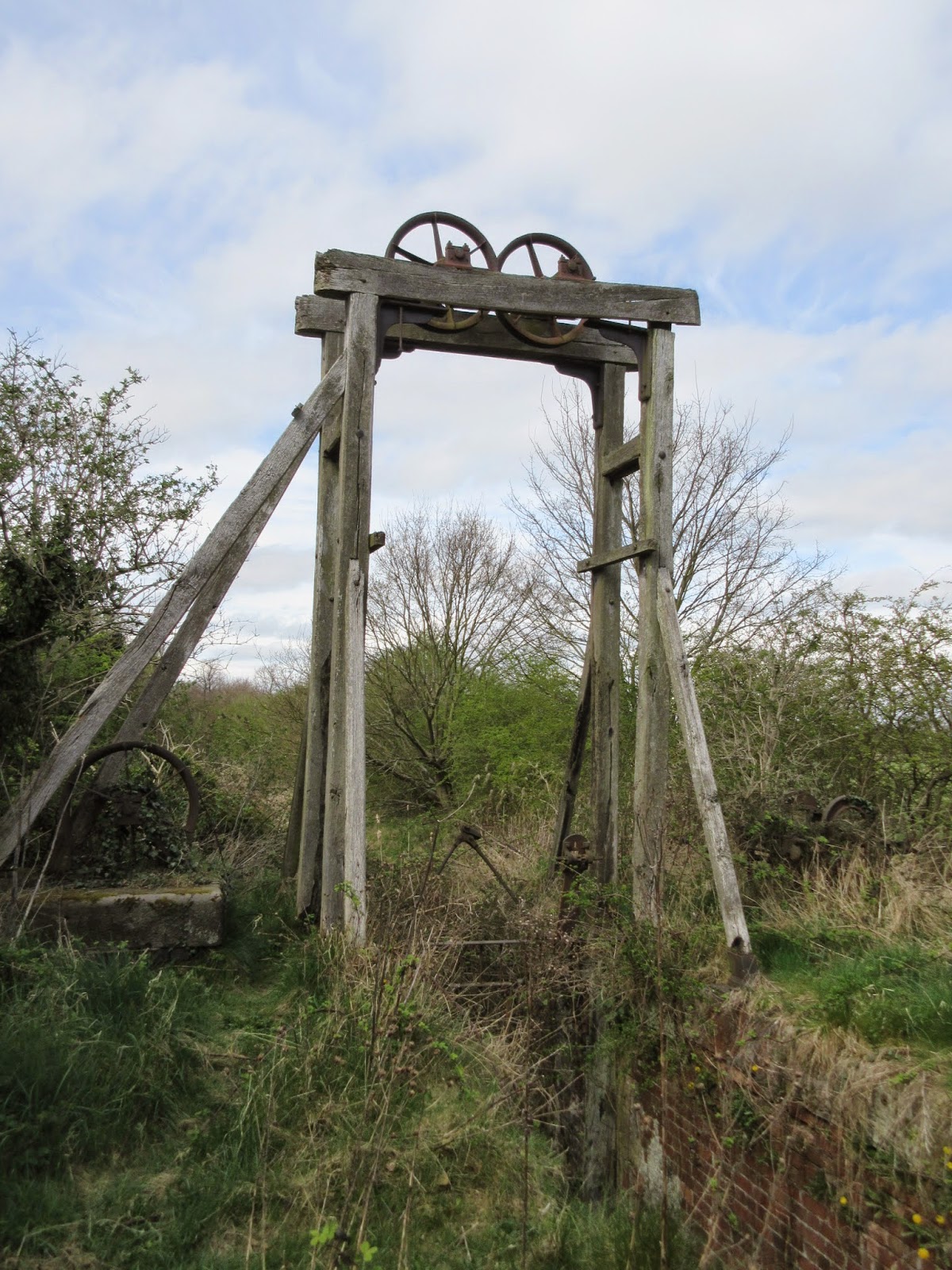 Here is Turnip Lock.  (Goodness knows where the name comes from!)  On the left you can see the mechanism for the counterweight.  Shall we look closer? 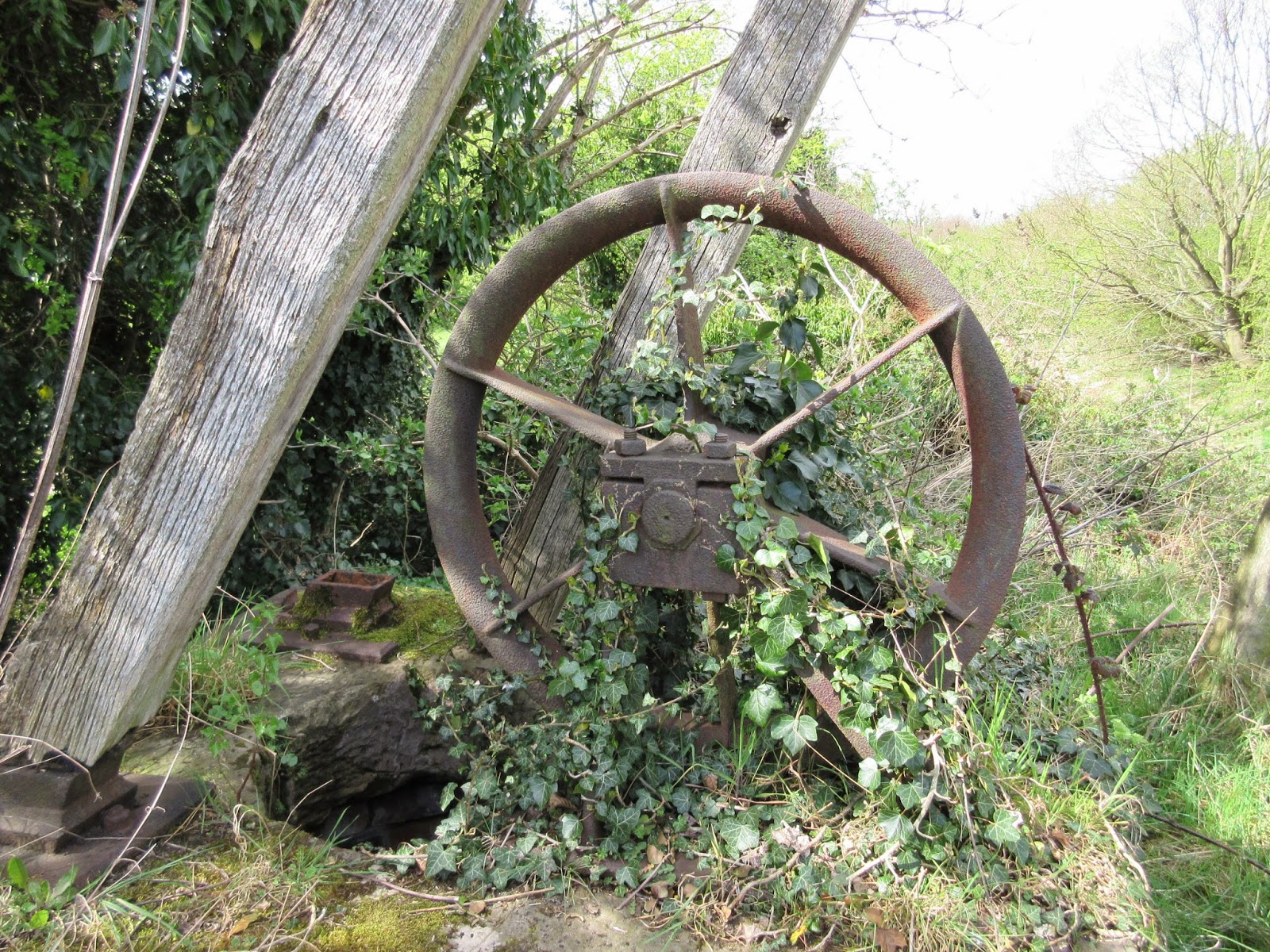 The hole was where the counterweight lived.  Let's look at the old gate itself - 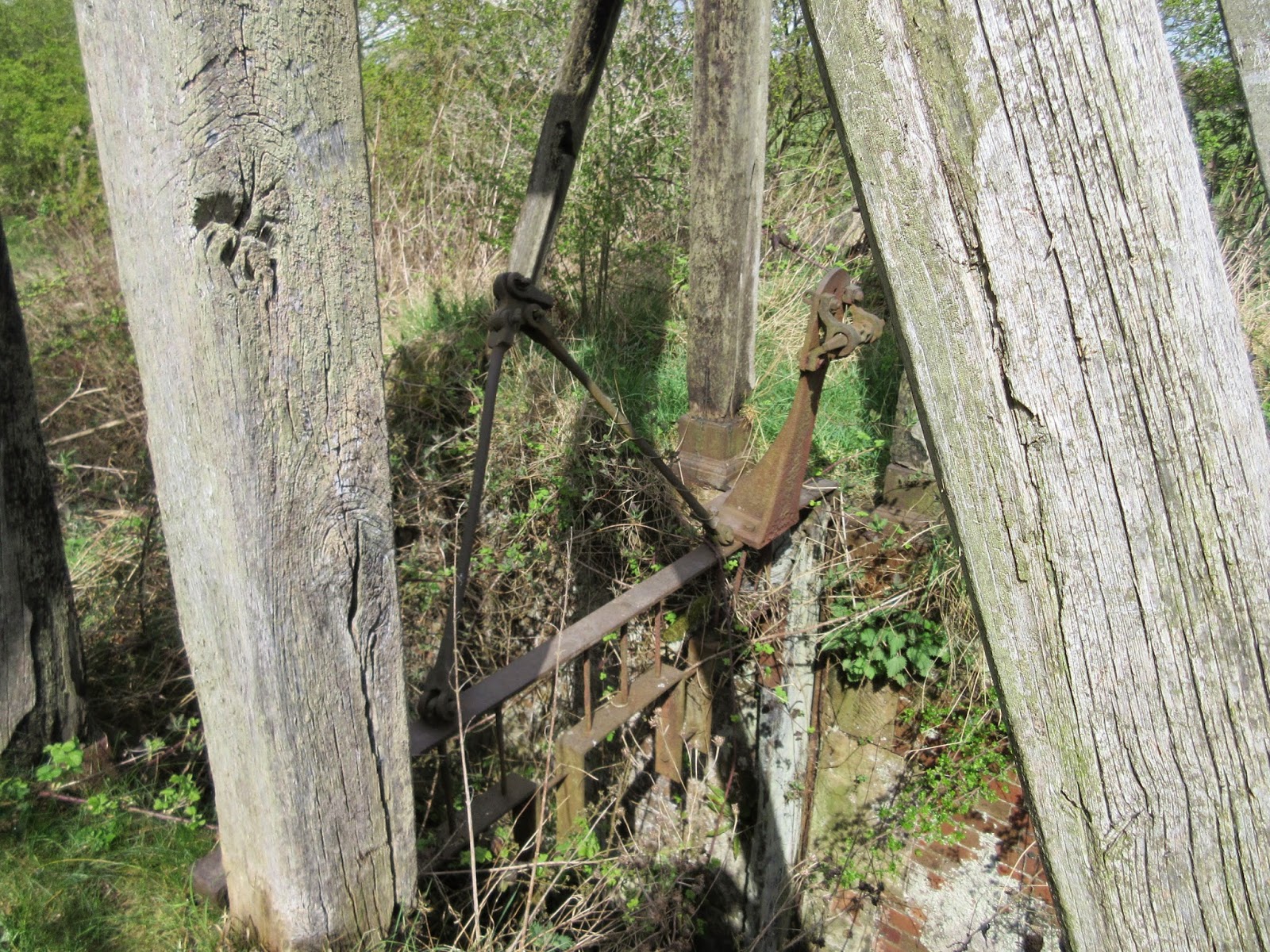 Are you getting the hang of all this now?  The gate was lifted up and down on chains which ran over  the wheels at the top of the gantry, counterbalanced by a weight which sank into a hole in the ground beside the lock gate.  Fancy a look at the lock chamber before we turn back to Hadley Park Lock? - 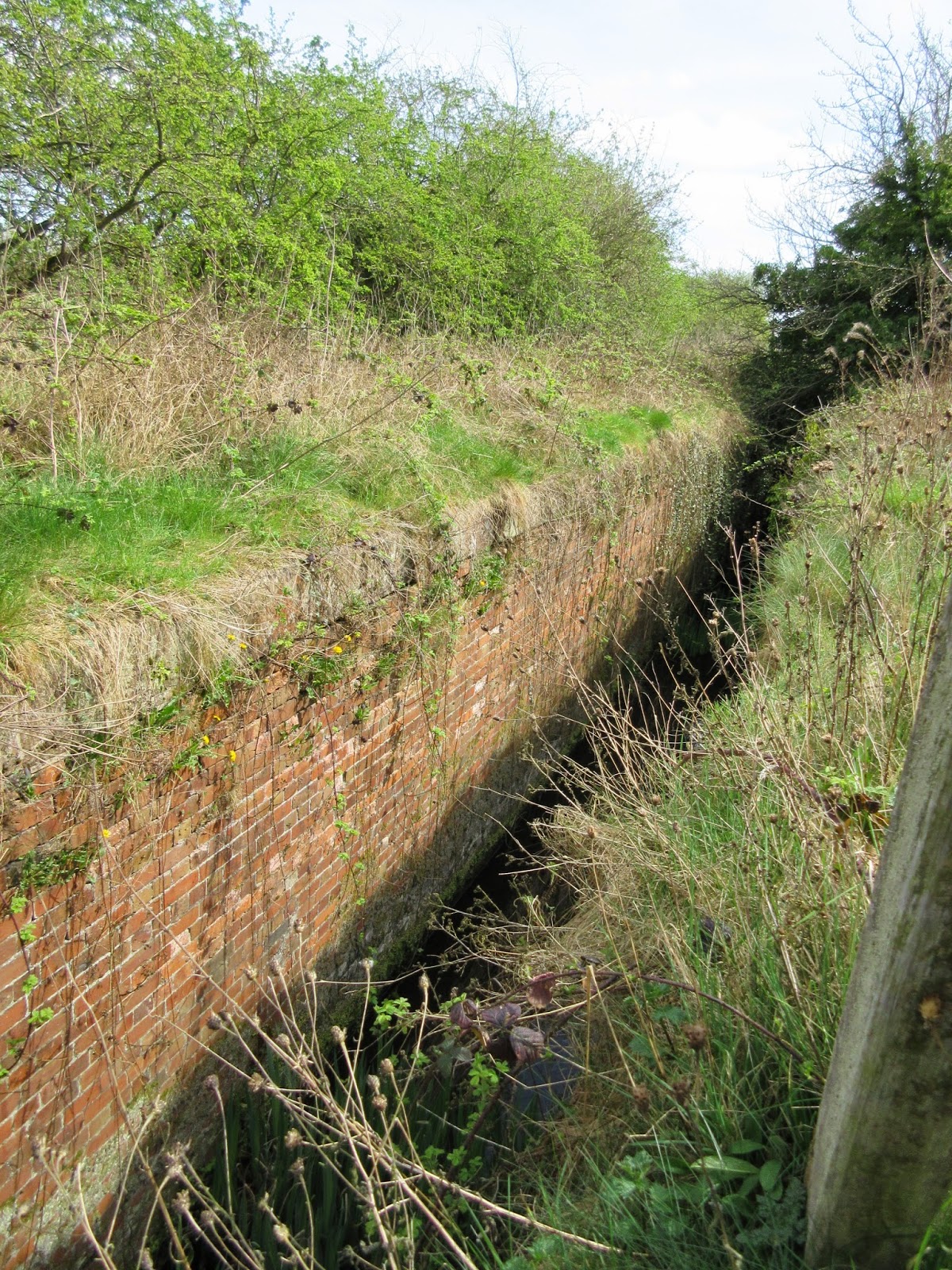 There is a drop of about 4 metres here and I am scared of heights so my heart was in my mouth when I took this, clinging on to the rickety old gantry!  Let's go back to Hadley Park Bridge and look in the other direction, away from the lock - 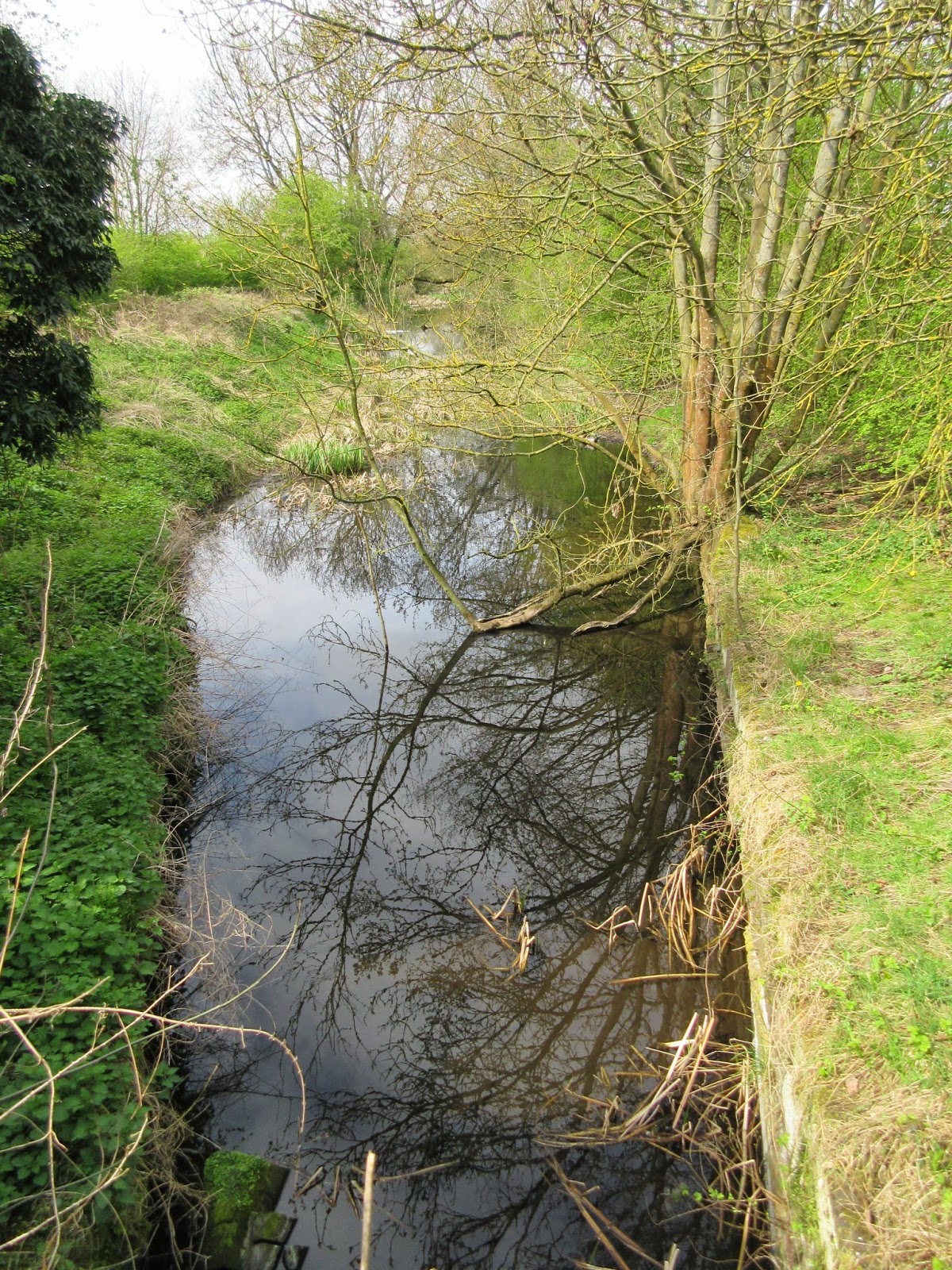 Water!  It's looks very serene, let's clamber down through the trees for a closer look at the bridge we're standing on - 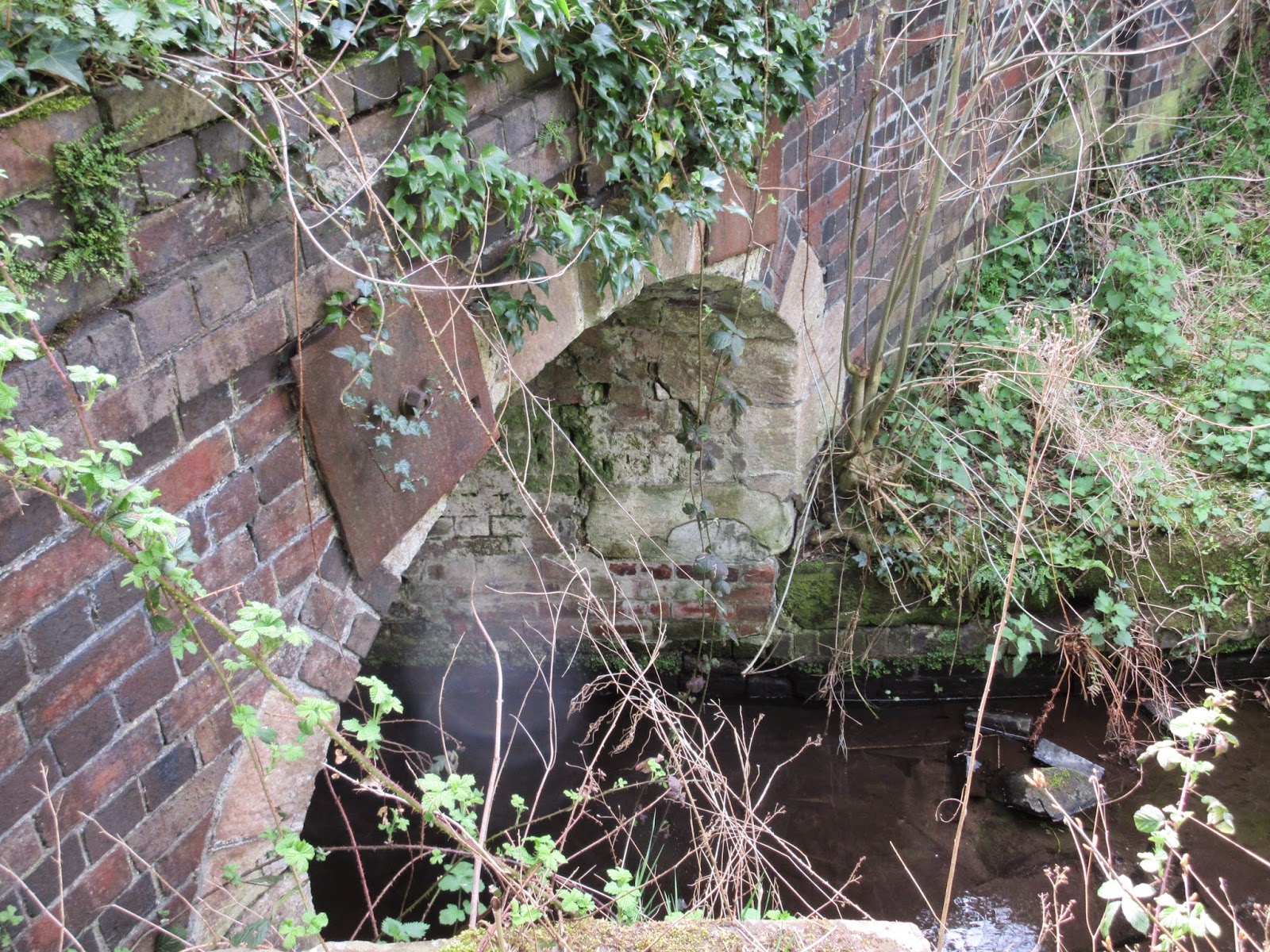 Hmm, close but not a very good view, let's go back up and over the bridge and try the other side - 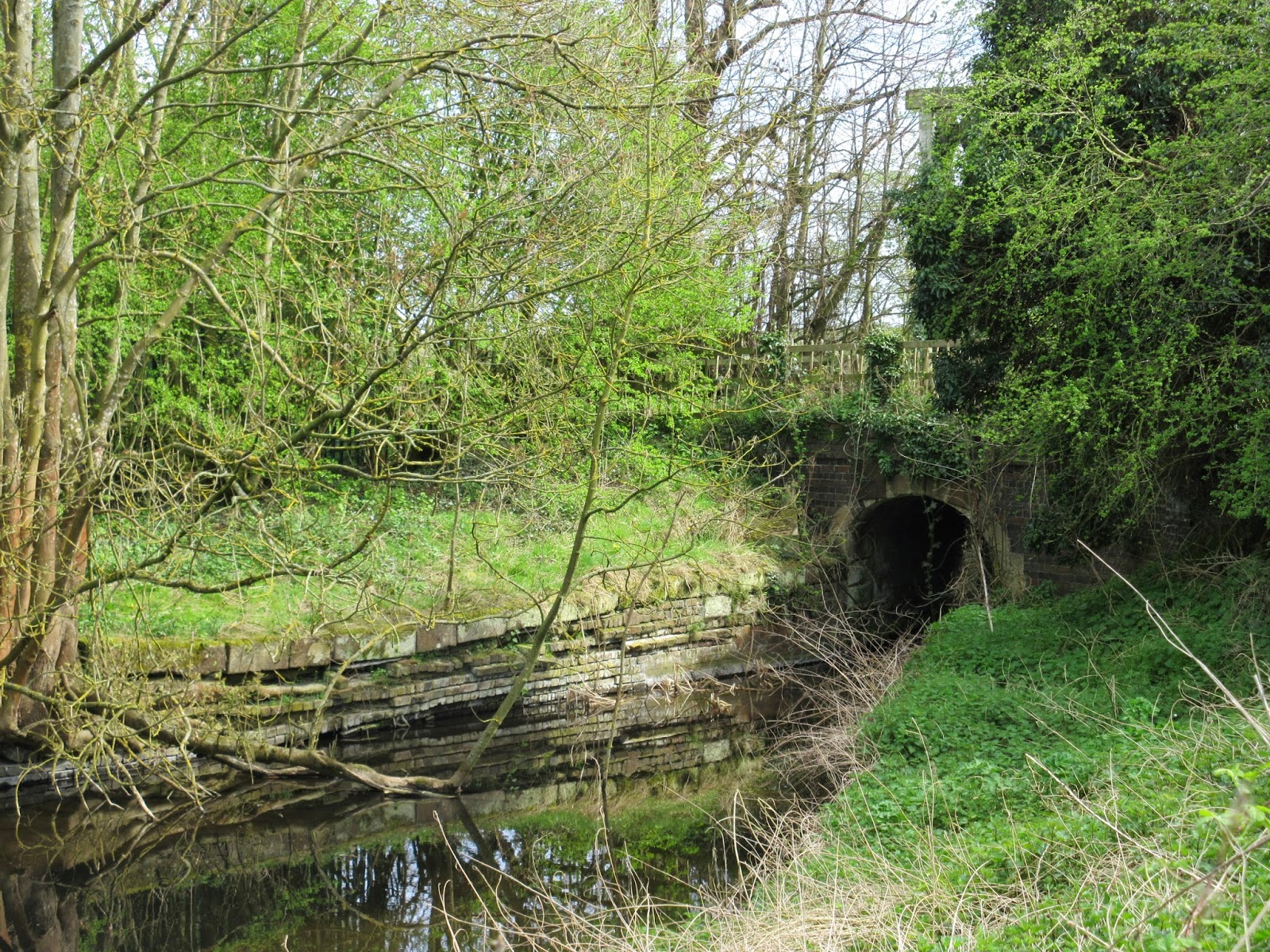 Ooh, that's better.  See how the tree has taken root in the wall and is growing straight out of it?  That can't be right, can it? - 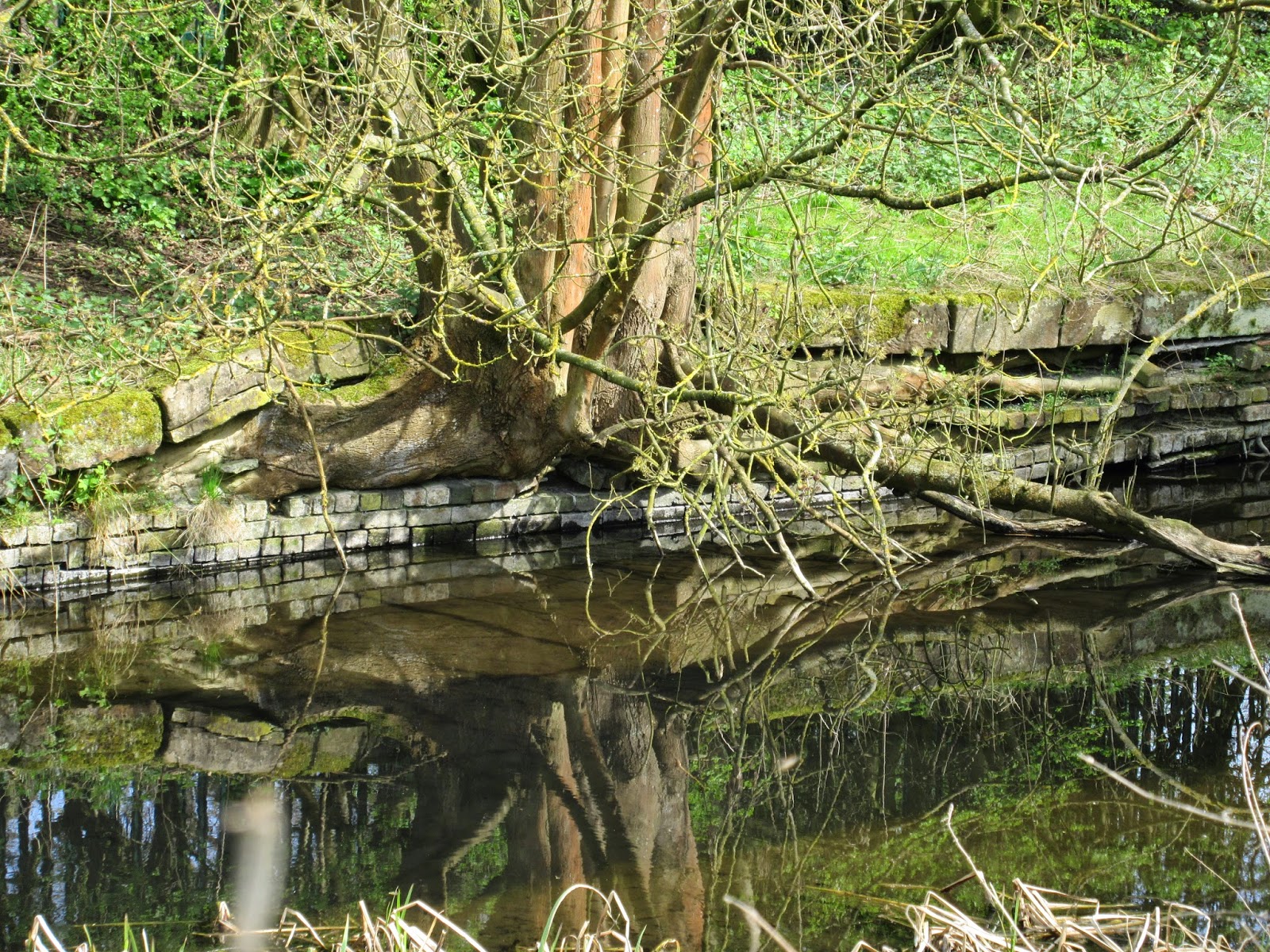 ﻿
It is pleasant down here in the sunshine, it could be so pretty if it were cared for.  Mr and Mrs Peacock Butterfly are flirting as are Mr and Mrs Mallard - 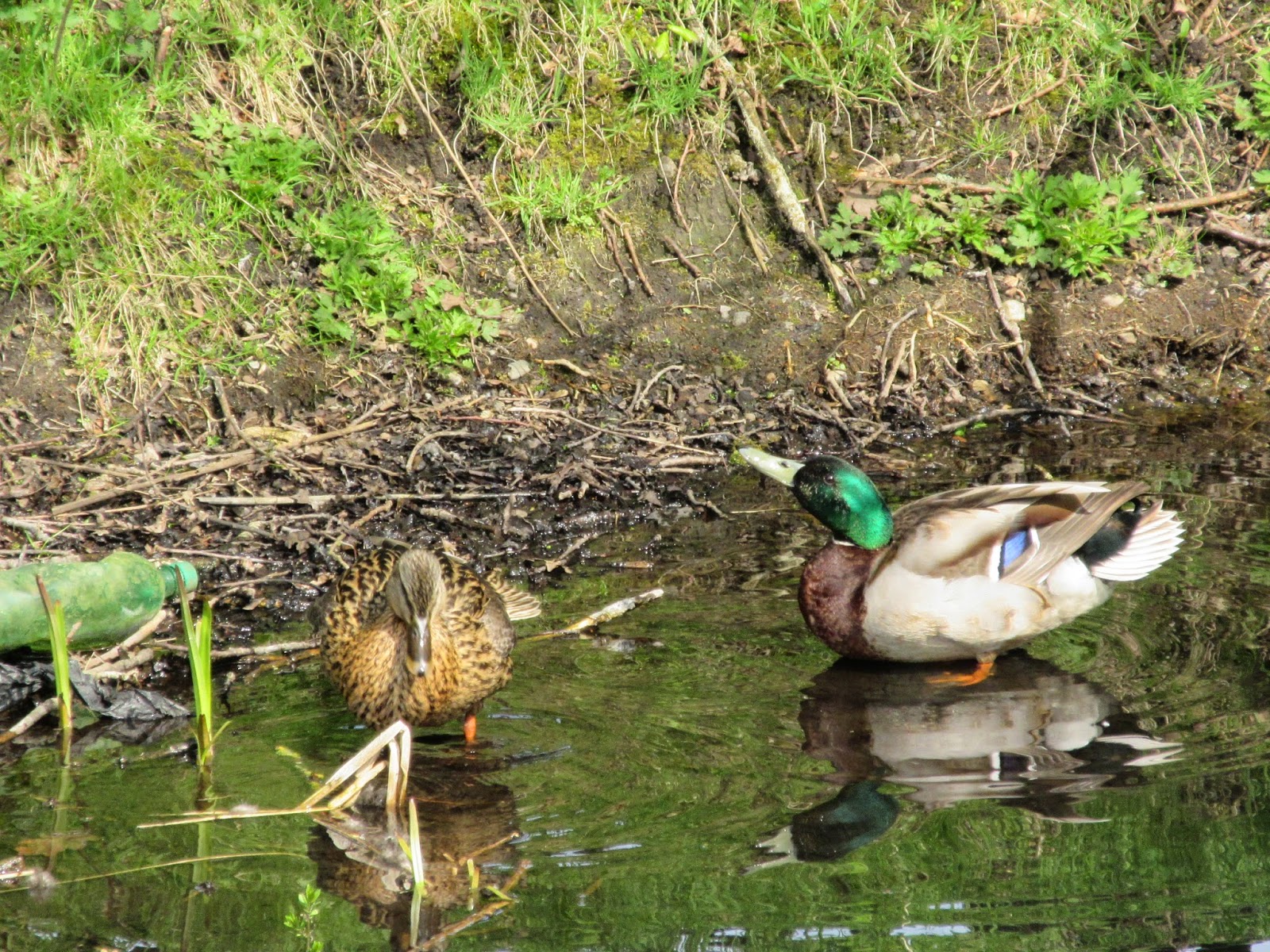 Now here's the bit I don't understand: these lock gates are unique, the only two left in the world and they are Grade 2 listed, as is the bridge, so why on earth have they been allowed to fall into such a state of disrepair?  It's all very picturesque and romantic to let the ivy grow over it, but surely it's damaging the structure?  Doesn't anyone care about them?  There are signs all around this place which say "Hadley, Rich in Heritage" so why aren't they looking after their heritage if they are apparently so proud of it?  It saddens me to see the locks like this, especially when you look at these photographs taken less than forty years ago, but that's why I wanted to take these photos and share them with you - the view won't always look like this.  Ho hum.
See you soon, I hope.
Love, Mrs Tiggywinkle x
﻿
Posted by Mrs Tiggywinkle at April 19, 2015