Hello my Lovelies, I am sorry I have been away for so long.  When you are in your fifties, the generation before you are in their seventies, eighties and nineties and so the last month or so has been beset with health problems and funerals - long lives well lived, but even so... you know.  I also have the ongoing effects of a nasty bullying situation rumbling away in the background which seems to be affecting me more than I thought it was.  I should probably have looked to Blogland for solace because I do find it to be a comforting place but instead, I retreated from it.
However, over the Easter weekend the Best Beloved and I went on a little jaunt which has given me such a fillip that I am bursting to share it with you: we have been to London to see my favourite band play at the Royal Albert Hall!  Show of Hands play there once every five years and in 2012 we took The Mathematician with us to see them.  It was a great evening, made even greater because during the interval we were offered the opportunity to move from our seats in the Circle into a box in the Grand Tier, right next to the stage.  That sort of thing doesn't usually happen to us and I have been dining out on the story ever since, and it's one of the reasons why I decided not to go this time, because I couldn't see how the experience could be repeated and I didn't want to be disappointed, especially with the cheapest tickets, in the Circle, costing £35.
However, The Mathematician surprised us with tickets on Christmas Day, just two this time, a generous gift from one so young, and the Best Beloved decided that as there would be just two of us, we could push the boat out and stay in a hotel overnight.  This would automatically make the evening better than 2012 when we had to leave the show before the encore in order to catch the last train home.  Can I just emphasise the details of this trip? - The Best Beloved and I were going to London by ourselves for the first time in almost thirty years to see my favourite band and stay in a hotel!!!!!!!!!!!!!!
So we set off on Sunday morning to drive to my sister's house in Buckinghamshire.  Not only does she have a lovely bundle of sons, but she also has a lovely bundle of three-week-old kittens at the moment and there was much oooohing and aaaahing from me (over both boys and kittens).  I am sorry this photo isn't very clear but even though I asked the kittens to sit still and pose, they ignored me so this was the best I could do. 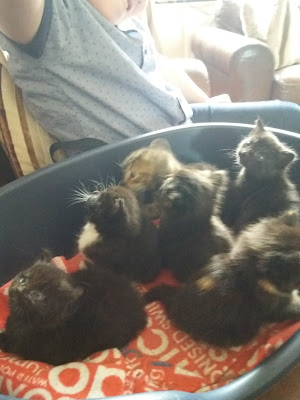 So after tea and cuddles we left our car at my sister's house and she drove us to the station to catch the train to Paddington.  Once there, we made our way to the Underground to wait for a District Line train and while we were on the platform I was unexpectedly bowled over by a wave of something.  Nostalgia?  Possibly, it was hard to put my finger on it but it was a warm, happy wave and I suddenly realised that I had stood on this platform many times in my teens-and-a-little-bit-later waiting for trains and that usually, I was going somewhere exciting.  Memories began to resurface, trips to the Horse Show at Olympia, to see Bruce Springsteen at Wembley, to see exhibitions and shows and to meet up with friends, all began right here on this platform after a train ride in to Paddington, as well as journeys back to university at the ends of the holidays.  Don't get me wrong, there were many long, tiresome, frustrating waits for trains so the platform experiences themselves were not entirely rosy, but I wouldn't have made the happy memories if I hadn't waited on that platform. 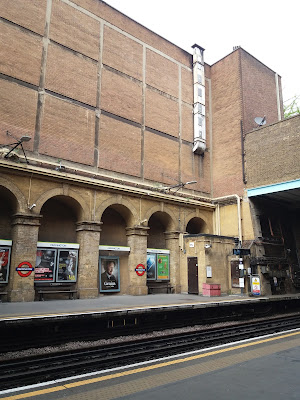 It felt like a really good welcome to London.  We didn't have a long, tiresome wait for a train and eventually, after a blip during which the Best Beloved made me walk a mile in the wrong direction, we reached our hotel.  (He said that we will laugh about it in the future and I told him to be quiet, rather sharply.)  At 5pm we set out again to find something cheap to eat before taking the tube to South Kensington, where somebody has made a pretty garden on the platform. 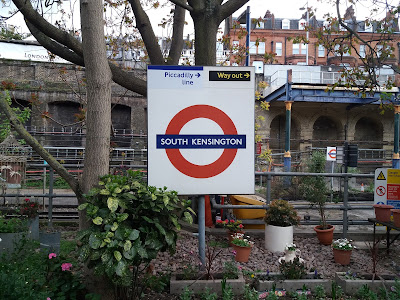 We ambled all the way up Exhibition Road, enjoying the evening sunshine.  The Victoria and Albert Museum positively glowed. 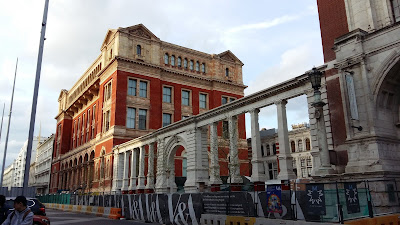 We carried on past the Science Museum and Imperial College, our heads up all the time as we marvelled again at the architecture, and turned into Prince Consort Road before at last turning into Albert Court. 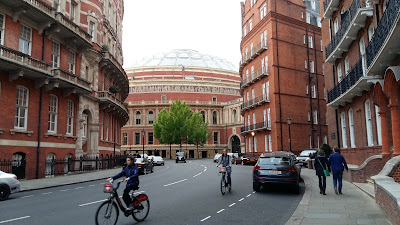 We had arrived in plenty of time and climbed up three flights of stairs to the Circle.  Frankly, my legs were killing me by this time and I was gasping and although the bars were open, there were no seats so people were sitting on the floor in the corridor enjoying their pre-show drinks, so the Best Beloved suggested that we take our seats in the auditorium and then he would go back to the bar and buy our drinks.  I thought this was an excellent idea!  We went to the door and showed our tickets to the usher who said, "That's fine.  Would you like to sit in the Grand Tier instead?"  A big smile spread across my face and I replied, "Yes we would, thank you very much," possibly a little too quickly, and he exchanged our tickets.  And that's how we ended up sitting in armchairs at the back of Box 23 in the Grand Tier at the Royal Albert Hall.  The view was wonderful, almost central to the stage, there was lots of leg room and the atmosphere in our box was very jolly as at least eight out of twelve of us had been "upgraded". (Please don't worry that we were at the back of the box because there are only three rows and each is a step higher than the one in front, so the view is great.)  We really couldn't believe it and nor could The Mathematician when we told her - as she said, "We are not lucky people.". 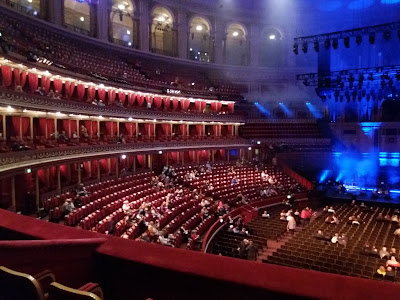 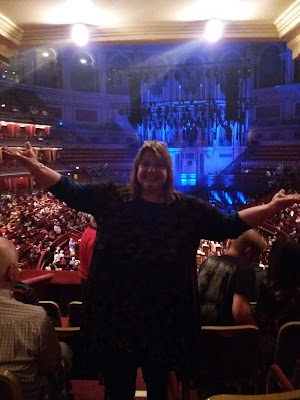 The show was FAB-U-LOUS.  Show of Hands were marvellous and so were their guests.  We had eaten a cheap dinner so we could afford to spend more than £11 on a pint of beer and a gin and tonic before the show and then do it again during the interval.  We sipped them IN OUR BOX.  Afterwards, we took a taxi back to the hotel where we drank some more gin and tonic in our room, using mugs because the glasses were the size of thimbles.  We were in London without our (lovely) children, staying in a hotel, drinking gin after seeing my favourite band.  Life felt very good indeed.
On Monday morning we ate a leisurely breakfast in the hotel before setting off back to Paddington for the train back to Buckinghamshire and as we boarded our train on Platform 8 we were able to pay our respects to the great Isambard Kingdom Brunel, designer of the station and Chief Engineer of the Great Western Railway.  (There is another statue on Platform 1, a small bear wearing a duffel coat and hat, but I didn't photograph him as he was besieged by children.)  We spent the journey smiling and going over the events of the previous evening (and avoiding talking about how the Best Beloved had led me the wrong way down the road for a mile).  As I looked out of the window I noticed how much further along the trees are in London than they are in Shropshire - hawthorn blossom is out already, wisteria too. 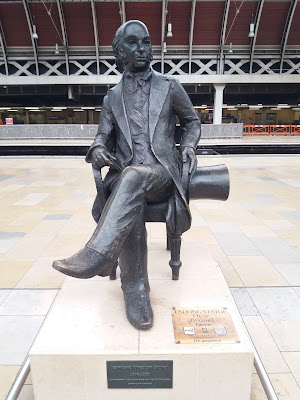 Some of you who know my love of the seaside and the countryside may be surprised by my love of London, so can I just say that tucked away in my coat pocket, ready for me to slip my hand in and touch them whenever I needed a bit of reassurance, were two shells and a small pebble, gathered from the beach at Dinas Dinlle in February?  You see, you do know me after all. 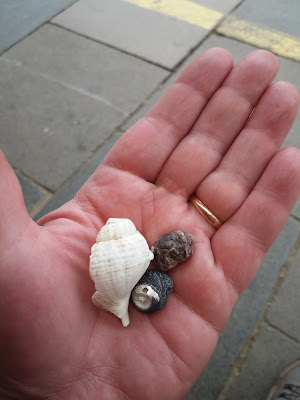