Hello, thank you for dropping in.  Well, it's been a bit of a week, hasn't it?  On Sunday 3rd January I watched the Prime Minister on television telling us all that the primary schools would definitely be reopening the following day, and secondary schools would be open to all pupils a fortnight later, so that evening the Best Beloved ironed a shirt, got his "uniform" ready and set the alarm for 6.30am in case his services would be required.   The following evening, after many pupils and staff had spent a day in school, sharing whatever they had caught from the people they mixed with during the holiday, I watched Boris on television as he told us all that we were going into lockdown again and that schools would only be open for vulnerable children and the children of keyworkers.  Here we go again.  Later that evening the Best Beloved suggested that we leave the Christmas tree up until Candlemas on 2nd February!  I was very surprised as I've been light-heartedly proposing this for the last eight years or so, ever since I discovered that it was traditionally proper, and he's always dismissed the idea out of hand.  We usually take the tree down on 5th January but this year, we didn't.  I was delighted - and at a bit of a loose end, locked down and with little else to do, but we spent the day talking things through and trying to formulate a plan to help us through the coming weeks.

Wednesday was 6th January, Epiphany, the day to celebrate the visit of the magi to the holy family, and I duly placed my little wooden figures in the crib and we chalked the door. 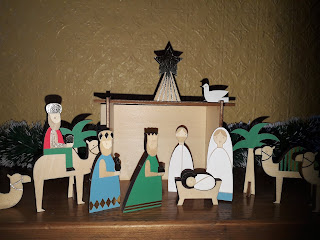 Do you know about chalking the door?  I didn't until three or four years ago.  I did it for the first time last year and I felt that it placed a satisfying full stop at the end of Christmas. 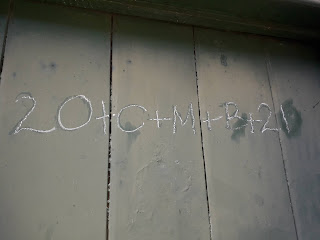 The letters CMB have two meanings: they are the traditional initials of the magi, Caspar, Melchior and Balthazar, and they also abbreviate the Latin phrase Christus mansionem benedicat: “May Christ bless the house.” The “+” signs represent the cross, and the “20” at the beginning and the “21” at the end mark this year.  The format is the same every year and once I had written the figures, I said a short prayer asking Christ to bless those who live in or visit our home throughout the coming year.  In some churches, sticks of chalk are blessed during the service on the Sunday before Epiphany and given to the congregation to take home and use to chalk their doors but I've never been to a church which does that and I thought that God wouldn't mind if I used unblessed chalk.  According to a report in The Telegraph there has been a rise in the practice this year and I wonder if that's because we feel more in need of blessings during the pandemic?

During the afternoon I made a willow star using a kit I bought online just before Christmas.  It felt appropriate for Epiphany.  All I needed to supply was a pair of scissors and a bit of sticky tape and I spent a very enjoyable hour or so at the kitchen table.  Once I'm ready to take it down it can be easily dismantled and packed away ready for next year. 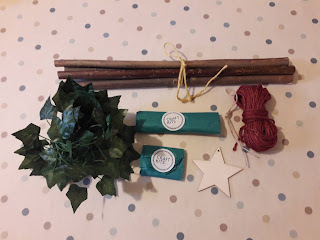 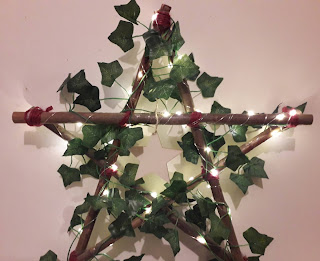 On Saturday we decided that the Christmas tree really couldn't stay up until Candlemas because it had become very dry and with an open fire in the room, it was a fire hazard.  I took a fond photo.  One of my favourite things to do at Christmas is to sit in this room in the evening with a glass of wine and watch something good on the television in the glow provided by fairy lights, firelight and candlelight. 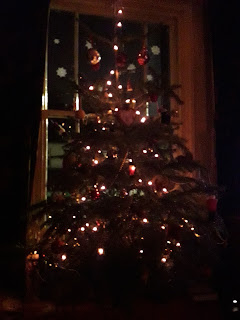 On Sunday I slipped out of bed while the Best Beloved was sleeping and began to take off the decorations and pack them away.  Surprisingly, the task didn't make me feel as sad as it usually does.  I had been very half-hearted about this tree from the outset, the Best Beloved had bought it by himself, ignoring my request and buying a tree which was bigger than I wanted, and I resented the tree a little for its size.  More than that, I hadn't placed The Mathematician's own, special decorations on the tree because she was unable to come home for Christmas and I couldn't bear to have them up without her being here, although then I missed those decorations and the tree felt incomplete without them.  I  mean, how can it really have been Christmas without the Christmas Dragonfly she made when she was a Brownie, or the silver snowflake she made in a D&T class at school??? 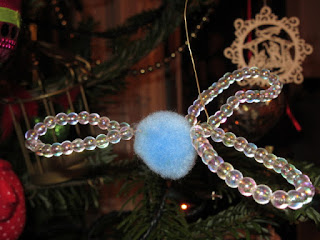 Things feel a little strange today.  The front room feels bleaker without the Christmas tree, although we have kept out all our tealight holders and lanterns so there is still plenty of Christmas cheer, and the willow star is shining.  Perhaps some wise men will turn up?  I think our Prime Minister could do with their help.

I wish you all a happy and hopeful new year.