Hello.  Thank you for dropping in, it's lovely to see you here.  It's the last day of January and the sun is shining here, although it's cold enough for me to be wearing a scarf indoors.  January can be difficult, can't it, after the fun and sparkle of Christmas and New Year?  A time to get back into the old routines, made more dreary by cold, wet, grey days.  Everyone seems to be desperately searching for signs of spring - there are snowdrops aplenty on social media, labelled as spring flowers, but really they are winter flowers, aren't they?  The truth is that, astronomically speaking, we are not quite halfway through winter.  For me, it's a question of mindset, I have treated January as the winter month she is and, with no expectations of spring sunshine and warmth, it's been fine.  I have sat by the fire in the evenings, a blanket over my legs and a mug of hot chocolate in my hand, hunkering down in my nest, reading books, crocheting blankets and watching television.
However, this hibernation has been punctuated by celebrations which have definitely satisfied any longings we had for fun and sparkle .  First, there was The Mathematician's birthday: we filled up the car with family, cards, gifts, flowers, cake and love and drove over to Loughborough to spend the afternoon with her. 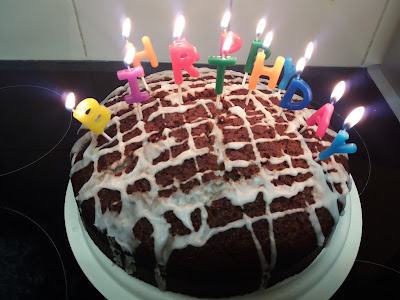 I must tell you about this cake:  fifteen months ago we visited Portchester Castle with the Best Beloved's family.  The church which lies inside the castle walls operates a café and as the weather was kind for the time of year, we sat outside to drink our tea and coffee and eat cake in the sunshine.  Some of us had the ginger cake which was so extraordinarily good that others of us, who had eaten other cake, then bought ginger cake on our recommendation!  I mean, this cake made us gasp, it was sooooo good.  My niece went inside and asked for the recipe and was told that it was very strange and included fresh ginger, black pepper, water and oil.  Armed with that information, I hunted around the internet and eventually found the recipe here.  I'm not sure that I got the oven timings right - I made the usual adjustments for a fan oven but they weren't right and I think the instructions were actually written for a fan oven - and I know that my decorating skills are, ahem, "rustic" but, gentle readers, the cake was a triumph (she says, blushing modestly)!  Zingy ginger with a warm background of cinnamon, cloves and, of course, that black pepper, perfect on a wintry day.  It feeds ten people easily and I shall definitely be making it again.
Our second celebration was a few days later, when we went to the University of Warwick to see The Teacher receive a Master of Arts degree.  I have been to several graduation ceremonies before but this one was special.  Please allow me this outburst of parental pride. 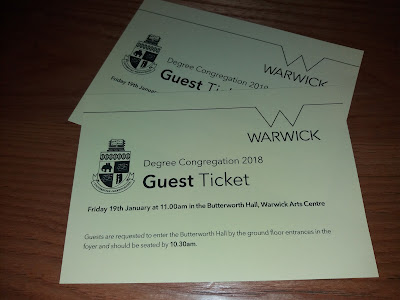 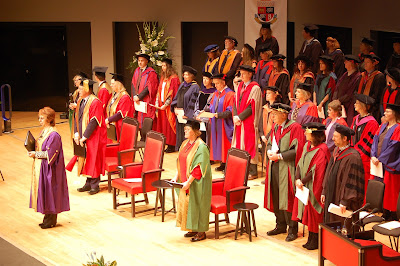 The third celebration was on the 24th January when I celebrated the life and works of Robert Burns in a Welsh household with some other English friends!  It's forty years since I went to a Burns Lunch and I've never been to a Burns Supper, and I don't really know why we were doing it on the wrong day, but I took with me some suitable Scottish postcards from my 1970s scrapbook and introduced my friends to the Selkirk Grace and the traditional Gaelic toast of "Slainte Mhath" (Good Health).  We ate haggis, neeps, tatties and carrots - 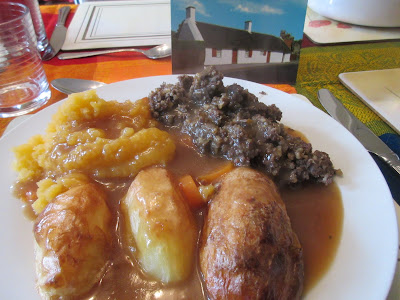 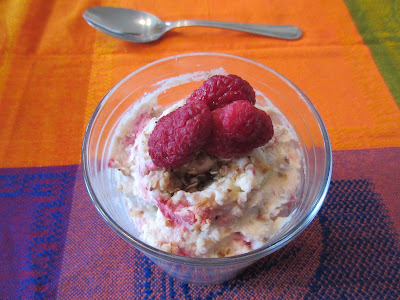 and finished with cheese and biscuits.  This is Caboc, which was first made in Scotland in the fifteenth century and which I don't think I have eaten since I left there in 1979, but now that I have discovered that I can order it online and it will be delivered to my house the next day, I shan't be leaving it for another thirty-nine years before I eat it again!  It was just as delicious as I remembered it to be. 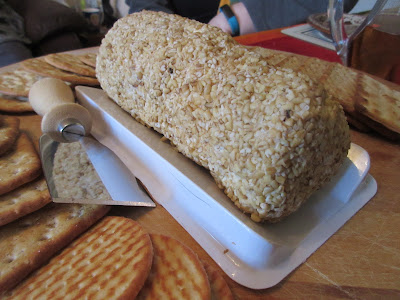 So that was January.  I almost wrote "I got through it" because I know that many people regard it as a month to be got through, but that seems a bit unfair on all the people who have birthdays this month (there are four of them in our family) and actually, I have done more than that, I have celebrated it.
See you soon.
Love, Mrs Tiggywinkle x
Posted by Mrs Tiggywinkle at January 31, 2018 25 comments:

A Box of Delights

Happy New Year!  I was pleased to see the back of 2017 and am hoping for better things in 2018.  As ever, I am delighted that anyone is reading my witterings so Thank You for dropping in.
The Mathematician has gone back to university but before she left us, she went to Paris for a few days.  So grown up!  She brought back a gift for her father and me: this very beautiful cardboard box. 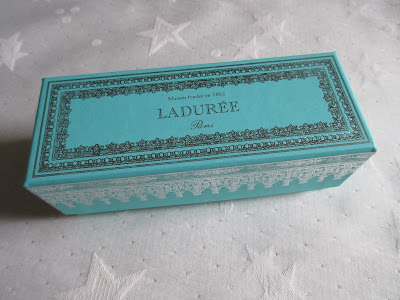 Isn't it gorgeous?  This colour is, apparently, Napoleon Blue (although some might call it Tiffany Blue) and the silver decoration "pays tribute to Napoleon Bonaparte style".  The box is small, not quite 15cm by 5cm, and all the decoration is silver.  It looks elegant, delicate and expensive, just like the other me, the me I could have been, and may once have aspired to be, but am not.  It currently sits by my bed so that I can look at it and daydream about the possibilities it conjures, and I can't help looking at it often.  Who would have thought that something as simple as a cardboard box could cast such a spell?  Have you heard of Laduree, fondee en 1862?  I hadn't but if you have, you probably know what was in the box. 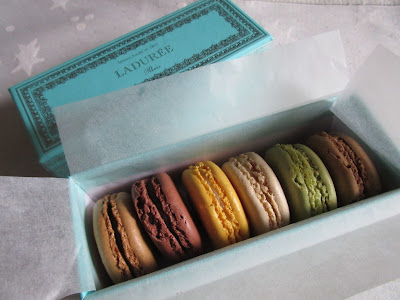 Six perfect macarons were nestled within, encased in waxed paper.  These refined and delicious morsels were utterly worthy of such a box.  We cut them in half and shared them between us, swooning over each luxurious bite.  We felt properly spoilt.  Obviously, they deserved to be served on my best china, Royal Doulton's Sherbrooke, and here are three of them on a standard tea plate so that you can see just how small they were. 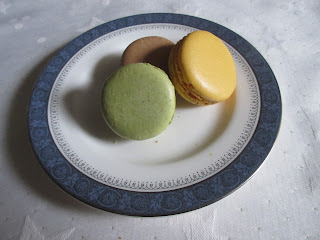 This little gift cost 18 euros, or £16, which seems an awful lot of money for six small macarons but of course, what it really bought was an experience, the opportunity to imagine that I inhabit a different sort of life and a beautiful box full of promise.
I know, I am ridiculous!
See you soon.
Love, Mrs Tiggywinkle x