Hello, thank you for calling in.  It's a miserable old day here but I had a very quiet and lovely weekend full of reading, crochet and a rare visit to the cinema, to see Little Women.  I think this was the first time the Best Beloved and I have been to the cinema together for five years and I think we might do it again soon because I enjoyed it.  I approved of the film except for the miscasting of handsome, youthful-looking, French-accented actor Louis Garrel as Professor Bhaer and I think that Greta Gerwig has done a fine job of both writing the screenplay and directing the film.  I hope she will be nominated for an Oscar in about an hour's time.

However, what I really want to share with you today is a bit of crochet.  Now that Christmas gifts have been delivered and opened it's safe for me to show you some of the things I made so here are some baubles 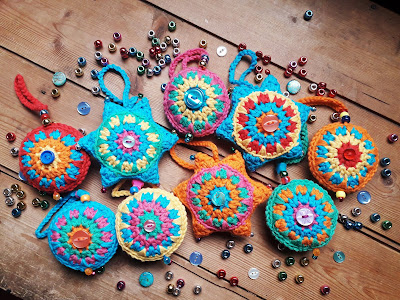 I made these with Drops Paris, a cotton yarn in an aran weight, but I used a smaller hook than usual, 4mm, to keep the stitches close and prevent the stuffing falling out.  I loved every bit of the process of making these, from choosing the colours, crocheting the yarn, choosing the buttons and beads and bells, the sewing up and stuffing to the little photo shoot.  The pattern is the Attic 24 Bauble Decoration and you can find it here if you'd like to.  I made these in the summer and crocheted the shapes first.  Then, one day in August among the unpredictability and chaos caused by a new baby, when I needed silence and solitude to regain some equilibrium, I carried a tray out to the summerhouse and while the Painted Ladies and Peacocks danced outside, I carefully and thoughtfully put the baubles together.  They filled me with happiness. 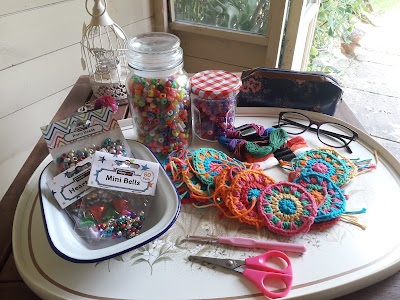 I loved them so much that I made some more, I couldn't help myself.  When The Teacher saw them, she asked me to make one for her and she hung it on her Christmas tree.  They were well-received and some of my friends told me that they intend to keep them out all year round, not just at Christmas, which made me very happy because that was my hope when I chose the not-specifically-Christmas colours.
I think I should make some for myself because looking at these jolly, bright photos is making me happy on this miserable old day.
See you soon.
Love, Mrs Tiggywinkle x
Posted by Mrs Tiggywinkle at January 13, 2020 18 comments:

﻿
Hello, and Happy New Year to you.  Thank you for making a bit of time to pop in here.  We packed Christmas away on Twelfth Night and put a full stop after it on Monday when I marked Epiphany by drawing my little wise men close to the stable and chalking our door but I know that some of you keep a different calendar and celebrated Christmas a few days ago, so Happy Christmas to you.
Like many other people, I have been making a few plans for this year and I can't do that without reviewing what I did last year so here are the rest of the books I read in 2019.  I set myself a target of reading twelve books of at least 450 pages and by 10th June, when I shared my progress with you here, I had read ten, plus three shorter books.  The pile for the second half of the year is much shorter.﻿ 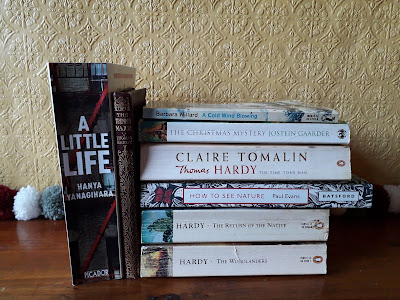