Hello, thank you for calling in.  Today I am joining in with Amy at Love Made My Home for Five on Friday, so thank you, Amy, for organising the party and joining us all together.  You are a star.


So, today is 23rd April, England's national day.  To be honest, I find it difficult to get excited about St George.  There, I've said it.  Unpatriotic of me, I know, but I just don't feel any connexion with him.  St David and St Patrick, boys from the British Isles whose feet trod our landscape, yes; a knight from the Middle East who never came within a thousand miles of England and was randomly adopted as our patron saint by a king who spent most of his life in France and barely spoke English?  No.  William Shakespeare, a great Englishman who left a gift for the world, saves the day: 23rd April was the day he died and today is the 400th anniversary of that day. 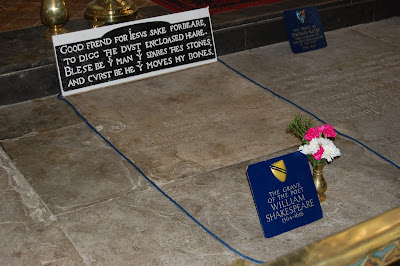 The Best Beloved took this photo in Holy Trinity Church, Stratford-upon-Avon, in 2008.
All British children study Shakespeare's plays at school and there are very good reasons for that.  For a start, many familiar phrases originated in his work: green-eyed monster, eaten out of house and home, a foregone conclusion, brave new world... thank you, Will Shakespeare.  Secondly, the themes are universal and as relevant now as they were in the sixteenth century: both Cole Porter's Kiss Me Kate and 10 Things I Hate About You are The Taming of the Shrew, West Side Story is Romeo and Juliet, Forbidden Planet is The Tempest and The Lion King is Hamlet with a happy ending (after all, it is Disney).  The problem for modern children is the language, removed as it is from the English we read and speak today.

When I was a teenager I was fortunate to live within an hour's drive of the West End of London which meant that there were plenty of opportunities to see the Bard's work performed which, of course, is the key to engaging with Shakespeare: he wrote plays to be performed by actors who understood the meaning of his words and were trained to convey that meaning to the audience, not texts to be read by bewildered first-formers.  My teachers understood that and so off we went to the theatre whenever we could to see those texts come alive.  So today my Five celebrates five of those plays, memories illustrated by the programmes I have kept.

1. The Merchant of Venice 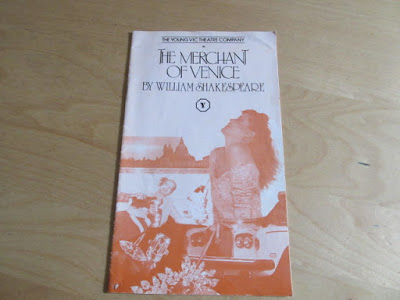 This was the first Shakespeare play I studied and the first I saw on the stage, in this case at the Young Vic.  On the back I have written "School English Trip 15th November 1979" so I was fourteen years old.  Modern setting, Shakespeare's words, no problem.  This one was directed by Michael Attenborough. 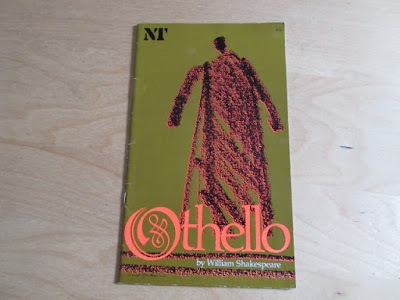 Ah, now this one really was something special: Othello at the National Theatre with Paul Scofield and Felicity Kendal, directed by  Sir Peter Hall.  Michael Bryant was a spellbinding Iago.  The programme cost 40p and I have written "School Trip 1st March 1981" on the back, very handy as I sat my O-Levels three months later and this was a set text.

3.  The Taming of The Shrew 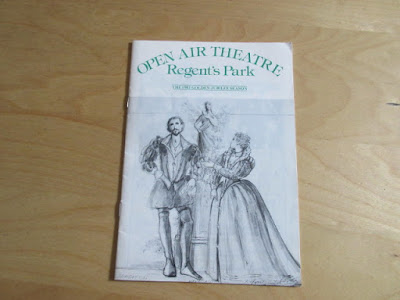 On summer evenings all over England you can find hardy souls wrapped in blankets and cagoules, enjoying picnics and watching Shakespeare performed in the open air.  It's a wonderful tradition!  In fact, the first Shakespeare play we took The Mathematician to see was The Tempest, performed in the open air and preceded by...a tempest!  The redoubtable players said that as long as there was an audience, they would perform.  Marvellous!  On 9th June 1982 I was at the Open Air Theatre at Regent's Park in its Golden Jubilee Season watching The Taming of the Shrew. Kate O'Mara was a wonderful and memorable Katherine (although, sssh!, I must say that I really don't like the misogynist theme of this play, despite the fact that I have seen it at least four times!). 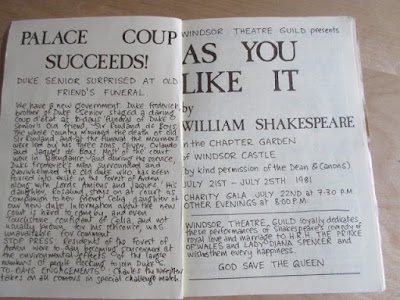 This was an amateur production - I'm not fussy, as long as it's good I really don't mind if the company is paid or unpaid.  The Chapter Garden of Windsor Castle made a leafy and lovely Forest of Arden and I knew several of the actors including the absolutely wonderful David Thomas, the deputy headteacher at my school, teacher of history, architecture, mathematics and history of art, ardent monarchist, director of ambitious school plays and leader of school trips to Italy, who played Touchstone and produced and designed this performance.  On the back I have written that this was Thursday 23rd July 1981 and that I went with Mum, Dad and my sister.

5.  Much Ado About Nothing 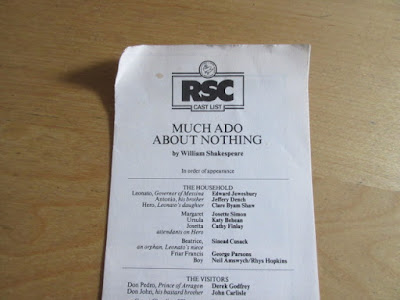 I studied Much Ado About Nothing for A-Level English and in this case, familiarity has certainly not bred contempt (I think that's Aesop rather than Shakespeare) for it's my favourite Shakespeare play.  I have seen it five times and this was not only the best of those, it is quite simply the best play I have ever seen.  It was outstanding.  I remember it so well, Sinead Cusack and Derek Jacobi sparkling as Beatrice and Benedick, the mirrored floor of the stage at the newly-opened Barbican Centre, the dancing, the torches... I was wonderfully transported to another world and I still hold the pictures in my head.  To my great annoyance, I haven't written the date on the back but this cast list shows that The Taming of the Shrew and King Lear were also being performed that season and as I went to those too, and did write the dates on the backs, I know that it must have been the spring of 1983.
Oh, how I have enjoyed going through my theatre programmes, remembering nights out with friends, with family, with boyfriends and later, with The Best Beloved and our children.  I have known for months that I wanted to commemorate Shakespeare today but I didn't know how I wanted to do that until my last post, when I suddenly realised the way for me to raise my personal metaphorical toast to the great Bard was to share these early experiences with you in this way.  Thank you for indulging me.  Now if you have time, please hop over to Rosie's blog because she is celebrating the day in the same way - except that it's different, because we have seen different productions and she has an absolute WOWSER at number five.  I was a bit stunned when I read her blog yesterday and saw that we were thinking along the same lines, but that's what Shakespeare's about, I think, the universal experience.
Today I am off to the Wenlock Poetry Festival for the day to enjoy some contemporary poetry, but I'm sure there will be a nod to Shakespeare.  We can't really get away from him.
So farewell, the elements be kind to thee and make thy spirits all of comfort (Antony and Cleopatra).
See you soon.
Love, Mrs Tiggywinkle x
Posted by Mrs Tiggywinkle at April 23, 2016 31 comments:

Hello, thank you for dropping in.  My last post was about Dame Judi Dench's inauspicious London theatre debut by way of the 1982 Royal Shakespeare Company's production of The Winter's Tale and having seen this morning's news, I feel I need to write again.
The Olivier Awards are given to recognise excellence in professional theatre in London and they are generally regarded as the highest honour in British theatre.  Last night, Dame Judi Dench received the award for Best Actress in a Supporting Role for playing Paulina in.....The Winter's Tale.  In the 1982 production which I saw, the role of Paulina was played by Sheila Hancock, who was also nominated for the Olivier Award that year, although the prize was ultimately awarded to Anna Massey for her performance in The Importance of Being Earnest, a play in which Dame Judi was nominated for Actress of the Year in a Revival for her performance as Lady Bracknell, although she didn't win, either.  Are you still with me?!
I am ever-so-slightly reeling.  Now then, I don't believe in coincidence, but I wonder what it was that drew me to choose that particular theatre programme to write about last week and to choose to relate it to my own 1982 theatre visit?  There were many others to choose from.  I didn't know that Dame Judi played in The Winter's Tale last year, or that the Olivier Awards ceremony was this weekend; at least, I don't think I knew.  And when I drew a little-used book from the shelf yesterday, a book which I have had for more than thirty years, a small clutch of theatre tickets fell from the pages, including this one - 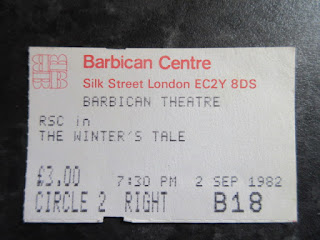 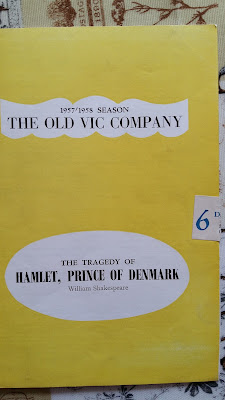 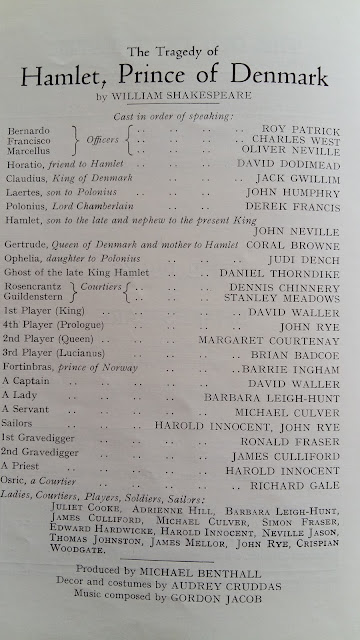