Hello, thank you for calling in.  Winter is here at last, cold, cold days and nights, frosty mornings, my vest is firmly tucked in and we have put a big blanket on the bed.  If only I could find my hot water bottle...

For those of us of a certain age, the last ten days have stirred up all sorts of memories and emotions with the deaths of three very talented and creative sixty-something men; David Bowie and Glen Frey are two of them.  Last Thursday lunchtime, The Mathematician rang me: she had just heard that Alan Rickman had died.  "I knew you would want to know,"  she said, "because I know how much you liked him."  She wanted to be the one who told me...

In the summer of 1985 my mother was studying English and read a book called Les Liaisons Dangereuses by Pierre Choderlos de Laclos.  I had never heard of it, but Ma suggested that I might like to read it because she thought I would enjoy it, so I took it with me on holiday: a week in a camper van with my boyfriend, travelling from Yorkshire home to Buckinghamshire.  She was right, I did enjoy the book.  I enjoyed the holiday, too.  We travelled in the afternoons, exploring our new surroundings the following day before moving on to the next place.  One afternoon we arrived in Stratford-upon-Avon and went to find out what was on at the theatre that evening: The Royal Shakespeare Company were performing in an adaptation of Les Liaisons Dangereuses at The Other Place!  Playing the leads were Lindsay Duncan and Alan Rickman.  Obviously, we bought tickets.  I had heard of Alan Rickman because he appeared on the BBC in 1982 playing the utterly odious Obadiah Slope in The Barchester Chronicles.  He had the most beautiful and memorable voice.

The Other Place was a studio-type theatre with only fours rows of seating, so the audience was very close to the drama.  Our seats were in the second row and I could have reached out and touched the actors at times, they were so close.  I didn't know that the play was only a couple of weeks into its run, that it would eventually move to London and then to Broadway, with that original cast, or that it would win awards.  I did know that it was outstanding, one of those completely absorbing theatre experiences which carry your mind and your soul and burn themselves into the memory, and I have always felt that I am lucky to be one of the few who saw it at the beginning.  Lindsay Duncan famously said, "A lot of people left the theatre wanting to have sex, and most of them wanted to have it with Alan Rickman," and I couldn't possibly comment (I was twenty!), but his performance as the predatory and villainous Vicomte de Valmont was electrifying and sexy and from that night on I have carried a torch for him.

This was before Die Hard, before Truly, Madly, Deeply (I wept buckets at that one), before Robin Hood: Prince of Thieves, before Sense and Sensibility, before Love Actually and, of course, more than fifteen years before he played Severus Snape in the Harry Potter films.

On Saturday evening I brought out my stack of theatre programmes and searched through them hungrily for something which I knew wasn't there.  Usually this is an activity which I linger over as happy memories resurface - the performances, the venues, the people I went with, the occasions we were celebrating - but not this time, this time I was a bit desperate.  I knew that there was no programme for that evening at The Other Place (and I can't remember why) but I wanted to find something tangible, something solid which I could hold in my hand and which would prove that I was really there that unforgettable evening.  Alas...

So I can only show you this, culled from the internet - 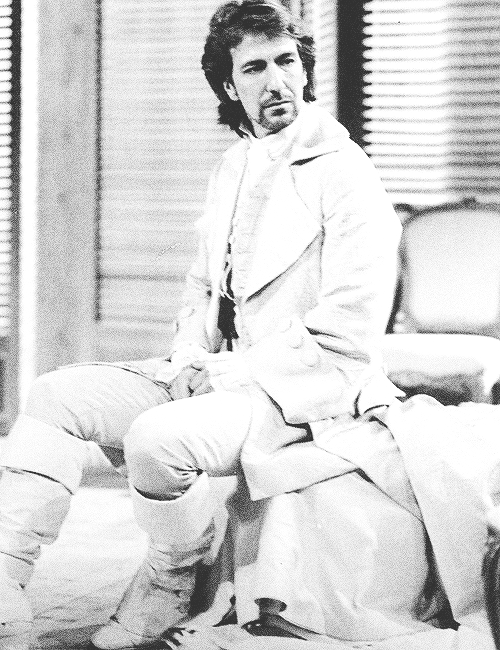 I cannot tell you how many emotions I have felt whilst writing this, but I do believe that evoking emotional response is the reason we need art to help us better understand the world.

I hope that Alan Rickman is resting in peace, knowing that his brilliant performances made us weep and laugh and cringe and fume and cower and gasp and sigh and brought us to a better understanding of human nature, and that some of us will remember him Always.