Hello, thank you for dropping in.  I am delighted that so many of you enjoyed our little outing to Moreton Corbet Castle and today, I am going to show you the parish church,
St Bartholomew's, which stands only a few steps away.

I pushed open the heavy, boarded doors and stepped into the gloomy 12th century nave. 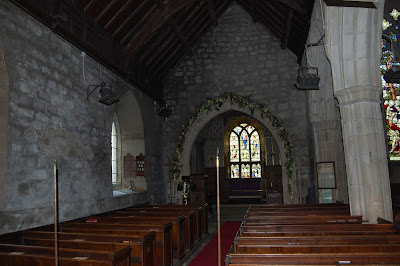 There is a list of rectors of this church, a list unbroken since the year 1300, displayed in a frame.  Christians have been worshipping here for more than 700 years but I had little sense that this is a House of God.  However, it is certainly a House of the Corbets.  There are memorials here of all shapes and sizes to members of the Corbet family, from marble tablets on the wall to painted tomb chests including this one - 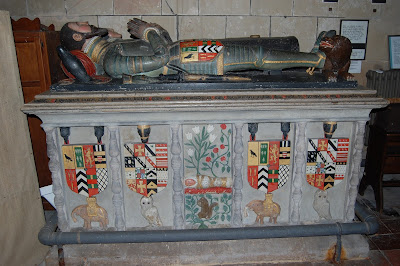 This chest commemorates Richard Corbet, who died in 1567, and his wife, Margaret Savile.  Their colourful coats of arms surround the chest, the power of the Corbets symbolised by the elephant and castle and the wisdom of the Saviles represented by the owl.  The swaddled baby in the middle must represent a child who died in infancy as Richard had no surviving children and when he died, his Shropshire lands were inherited by his nephew, Sir Andrew, the man who extended the castle. 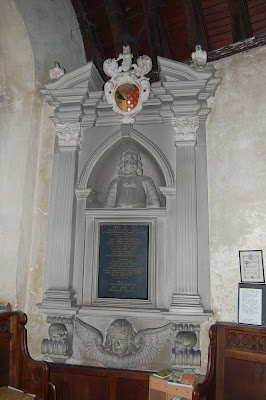 Obviously, the grand Corbets couldn't be expected to sit with the common people of the parish and in 1778 a "squire's pew" was added.  This three-sided room off the south aisle had a fireplace to keep the grandees warm, cushioned pews and curtains which they could pull across so that they wouldn't have to gaze upon/smell the hoi polloi.  This enormous memorial to another Richard Corbet, a royalist soldier who died in 1691, fills one corner of the room. 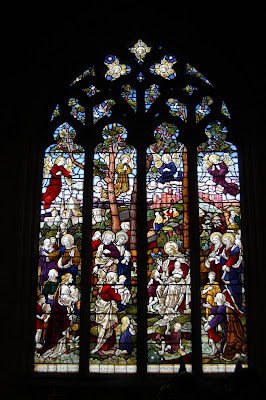 In 1883, Vincent Rowland Corbet, 3rd Baronet, paid for the refurbishment of the church and after he died in 1891, the family installed this window in the south aisle in his memory.  Entitled "Suffer Little Children" and made by the renowned firm Clayton and Bell, it depicts the passage in the bible in which Jesus exhorts his disciples to let the children come to him and it's quite charming.  Now, I know almost nothing about stained glass, but when I got home I looked up Clayton and Bell and was intrigued to discover that their windows can be found in Switzerland, Canada, the USA, Australia and New Zealand - as well as in St Peter's Church in Burnham (please excuse this personal reference, but I know that some of you are  familiar with St Peter's).  You can read more here if you are interested. 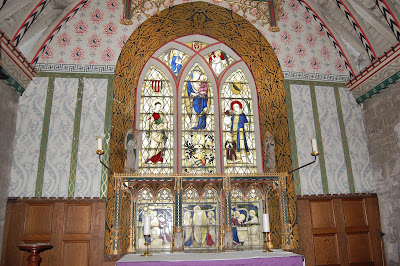 In 1904, Vincent Stewart Corbet, the son of the 4th Baronet, died of appendicitis; he was thirteen years old and a student at Eton College.  His parents commissioned Sir Ninian Comper, the great Gothic Revival architect who would go on to design windows for Westminster Abbey, to refurbish the chancel and replace the east window in his memory in 1905 and this is the result.  If you look very closely you may be able to make out the alabaster elephants on either side of the window's central bottom panel.  The refurbishment included a golden canopy on the ceiling - 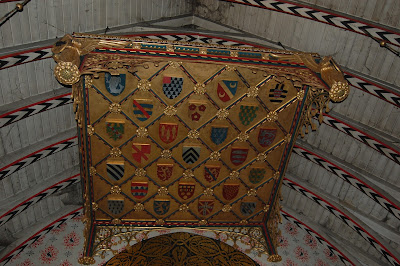 There is another memorial to this boy outside in the churchyard, a carved stone plinth which once bore a bronze statue of Mercury.  The carving is rather beautiful and depicts two emblems of the Corbets, the elephant and castle and the squirrel. along with their respective mottoes: Virtutis Laus Actio (The Praise of Virtue is Action) and Dum Spiro Spero (Where There Is Breath, There Is Hope).  This poignant memorial tells a sad tale, for in 1910 Vincent's mother, Lady Caroline, added the name of her husband, Walter Orlando Corbet, and in 1915 she added the name of Vincent's younger brother, Rowland James Corbet, killed in action in France fighting the Great War; her husband and both sons dead within the space of eleven years. 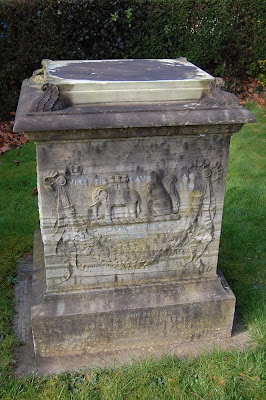 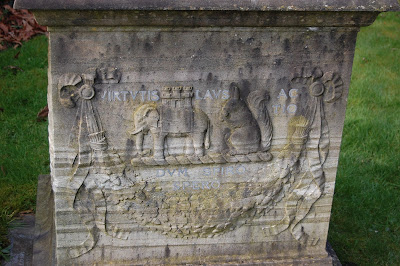 It is a fascinating place to visit, displaying more than six hundred years of the history of the one family and how the English fashion for celebrating the lives of the rich and powerful has changed during that time - and holding the Corbet family's present as well as its past, for Christopher Corbet is the churchwarden.