Hello, thank you for calling in.  We are in the last few days of summer here, the sun has been shining and the temperature is still mild enough for short sleeves.  This has made the transition from holidays to termtime much softer and easier, our magical summer break doesn't seem too distant and I am still wearing a holiday glow, although it fades a little each day.

If you travel west to the very edge of Shropshire you will find the village of Melverley, right beside the River Vyrnwy.  On the other side of the river is Wales, for this is border country, the Welsh Marches.  The river meets the River Severn nearby, and so people have lived at this place for longer than anyone knows, and where people lived, they built churches.  The church which is there now is a replacement for the building which stood there before until it was burnt down in an act of arson in 1401.  In 1406, great pieces of oak were transported here and a sturdy wooden frame was built, a simple, rectangular, barn-like structure, the gaps between the oak were filled with wattle and daub, a thin coat of plaster was applied and then limewashed.  Not a single nail or screw was used, the wooden frame was held together with mortice and tenon  joints and wooden pegs.  A couple of hundred years later, a wooden screen and gallery were added, as was the fashion of the time, using wood salvaged from ships which had been broken up and transported up the river.  At some point, a bell tower was added, simple windows were installed to admit the light and in 1925, a stained glass window was fitted into the east end of the building.

The great pieces of oak are still standing beside the river 610 years later, the wattle and daub was replaced only twenty-five years ago and people are still gathering here to worship every Sunday. 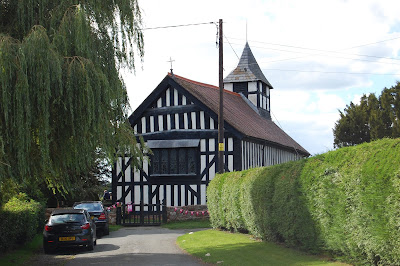 One day in 1990, the keyholder came to open the church and when she entered the churchyard, she thought that the church had moved!  Of course it couldn't be true, and in fact it was not the church which had moved but the river bank, sliding into the water and bringing the river dangerously close to the church.  Action needed to be taken so a survey was done and a quote obtained to stabilise the bank: £50,000 was needed.  There are only fifty houses in the village and the sum seemed enormous but, as that keyholder explained to me, "We couldn't let the church go," so they applied for grants, sent begging letters and embarked on a programme of fundraising events.  The money was raised and the work began but as the contractors sought to secure the foundations of the building they discovered that...there were none!  More work was needed to underpin the church and so more letters were sent, more fundraising events held.  English Heritage awarded a grant of £90,000 but attached conditions, one of which was the removal of the wattle and daub and its replacement with fireproof material.  Some pieces of the oak timbers were replaced but again, not a single nail or screw was used, so the building is still held together with wooden pegs.  The final bill was in excess of £234,000 and the determination, creativity and hard work of the villagers in raising the money was rewarded not just by a secure building which is in no danger of being swept away downstream but also by being named Britain's Most Motivated Village 1991.  The prize for this was a plaque and several large sacks of daffodil bulbs to be planted in the churchyard...but irony lay in the fact that the church had great difficulty in motivating anybody to come and plant the bulbs!! 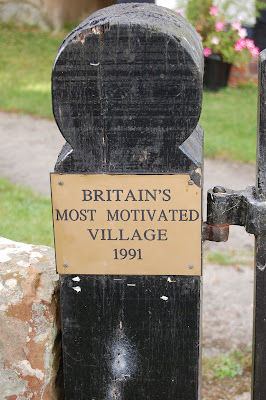 The church is open every day but in truth there is not a great deal to see.  There is an ancient font, probably Saxon, big enough to immerse a baby in, a Jacobean pulpit and altar, an 18th century chained bible and a rather nice stained glass window. 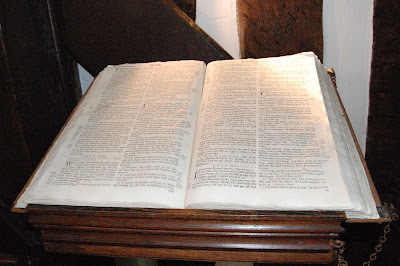 The reason to visit is the building itself and its beautiful setting beside the river.  It's a peaceful place, a place to stand in the footprints of people who have been worshipping God here for more than six hundred years and wonder at that fact, a place for contemplation and reflection and you may find spirituality in its simplicity. 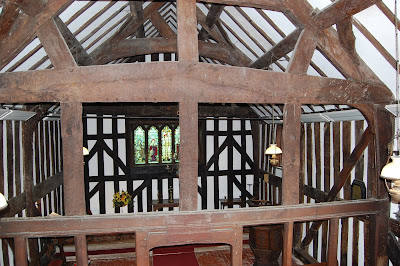 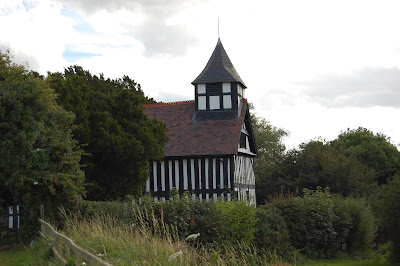 There is just enough room for one person to walk between the church and the hedge which is planted in the river bank.  Before the bank was swept away, there was room for a coach and horses to get through.

Oh, and if you go in the spring, the churchyard is full of golden daffodils.

Posted by Mrs Tiggywinkle at September 20, 2016