Hello, thank you for calling in.  It's a bank holiday weekend here in England so it's raining.  In fact, it's not just raining, I am actually slap bang in the middle of a thunderstorm and the cats are definitely not impressed.  Did you know that until 1830 the Bank of England used to close on about forty saints' days and anniversaries?  Forty!  Now I think we have eight.  Today, however, is significant for another reason: 27th May is St Melangell's Day...unless you are in Wales, where she is remembered on 31st January!


This is a post I have been waiting to write for months, and yet holding back too, unwilling to set it free and share it with the world.  On a very wet and soggy day in March last year I visited a very special place in Wales with a group of friends who crossed three generations, a place I have visited twice since and thought about often, a place which almost seems to have claimed a piece of my heart.  (That reads like a terrible cliché, I know, but honestly, that's how it feels.)  It is Pennant Melangell in Powys in Wales. 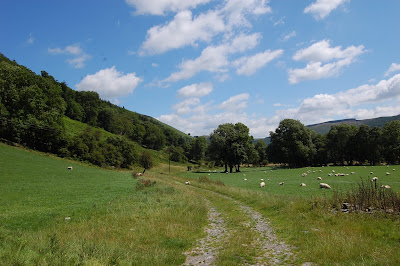 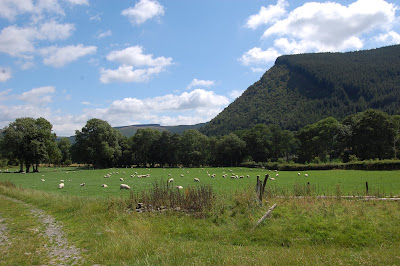 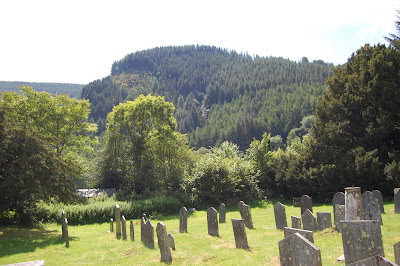 St Melangell (pronounced Mel-AN-geth) was an Irish princess, the daughter of King Jochwel, and about 1,430 years ago her father tried to marry her off in a political arrangement to secure his land and power, as kings did in the sixth century.  Melangell didn't like the sound of that so she ran away across the sea to Wales where she ended up in the Upper Tanat Valley, a remote and beautiful green place under the Berwyn Mountains.  For fifteen years she lived there as a hermit, living off the land and quietly devoting herself to solitary prayer.  There is a large rock on the hillside known as "Melangell's Bed" which is where she is said to have slept.  One day in 604 AD, Prince Brochwel of Powys, who owned the land, was out hunting with his servants and dogs in the valley.  The hounds shot off after a hare which dived into a bramble thicket and when Brochwel followed them he found Melangell there, quietly absorbed in prayer and oblivious to the noisy kerfuffle going on around her; the hare was hiding under the hem of her robe.  She refused to give up the hare and Brochwel was so impressed by her courage and serenity (in the face of a baying pack of hounds and armed horsemen) that he gave her the valley and built for her a sanctuary so that any person or animal who sought refuge there should find it.  It was to be a place of asylum forever.  Melangell founded a nunnery there, became its Abbess and died there thirty-seven years later in 641 AD. 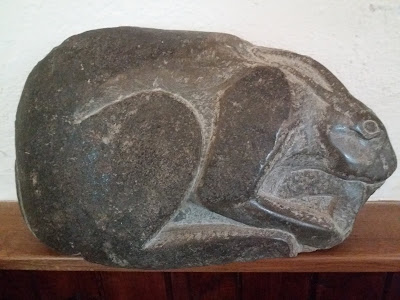 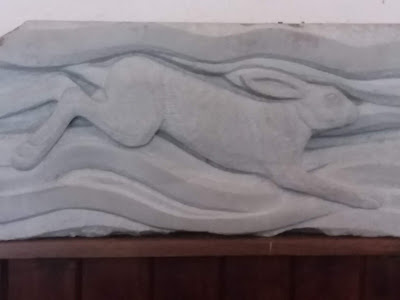 Inside the church there are several hare sculptures by Meical Watts.﻿
So goes the legend of St Melangell.  It was told for more than eight hundred years, passed down the generations, before it was first written down in the late fifteenth century in the Historia Divae Monacellae - the Latin name for Melangell is Monacella.  The traveller and writer Thomas Pennant visited the area in the late eighteenth century and found that people were still telling her story rather than reading it - which is hardly surprising, given that most of the people who lived in that remote place wouldn't have been able to read at all, let alone understand Latin.  He wrote the story down and added a dramatic flourish: when the Prince's huntsman raised his horn to his lips to blow it in order to urge on the hounds once they had discovered the hare under Melangell's hem, no sound came out and the horn stuck to his lips. 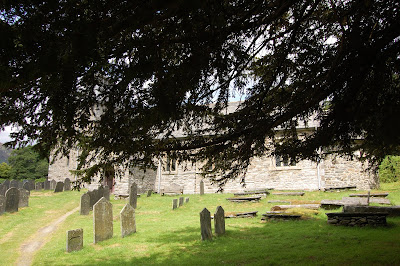 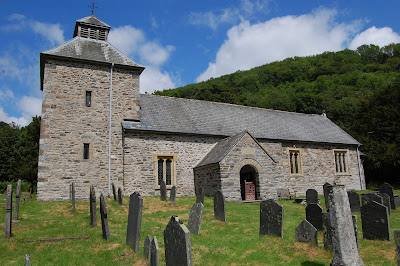 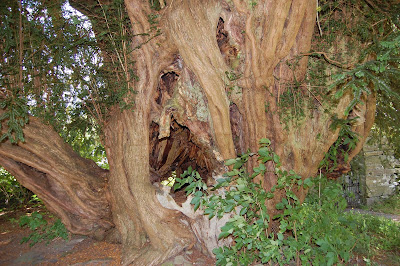 The Shrine Church of St Melangell dates from the twelfth century, although the current building probably replaced an earlier wooden one.  Pilgrims still make the journey along the single track road, about two miles from the village of Llangynog - the second time I visited, on a beautifully sunny day in July, I took the Best Beloved with me and when he said, "Are you sure this is the right road?"  I replied, "Yes, I'm sure - look, there's a monk walking just ahead of us!"  There was indeed a monk, I knew it by his habit, and that's not a sight often seen where I live.  However, the churchyard is circular, which suggests that this was used as a sacred place during the Bronze Age, and ancient cremated remains found here have been dated between 1,000 BCE and 1,500 BCE, more than 1,500 years before St Melangell was here.  The yew trees which stand beside the enclosing wall have been certified to be two thousand years old and although this may be debatable, they are certainly more than one thousand years old.  There is something about this place, something I can't put into words.  When the Best Beloved and I went to Snowdonia last month he suggested that we make a small detour so that we could visit again.  We ate our packed lunch in the churchyard before going inside and even though the clouds were low and the air felt wet, we felt warm and dry sitting there on a damp wooden bench.  As I said, it's a very special place. 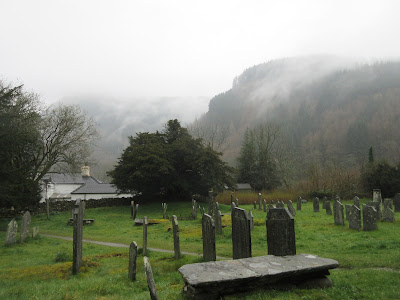 The church itself is fascinating, having been renovated several times over the last nine hundred or so years, most recently almost thirty years ago.  St Melangell's shrine, built to hold her relics in the twelfth century, now stands in the chancel and is unique in Britain; in fact, it's held to be the oldest and most important surviving Romanesque shrine in Northern Europe (can you hear me shouting that?!).  It was dismantled during the Reformation in the fifteenth century and its pieces scattered, some of them being built into the lych gate and the walls of the church.  They sat there unidentified and anonymous, the soft sandstone gently weathering, until 1894 when somebody realised what they were, but it was another sixty-four years before they were rescued and pieced back together in 1958, and rebuilt again in 1989.  New pieces were cast in concrete to replace the missing bits, making it easy to see which are the ancient stones, and silk cloth drapes were made, and although nobody knows what the original shrine actually looked like, this seems a fair interpretation. 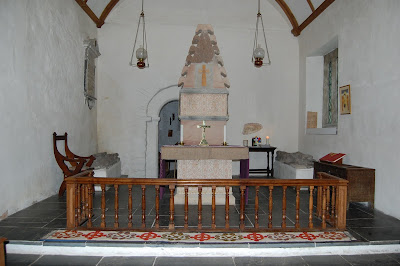 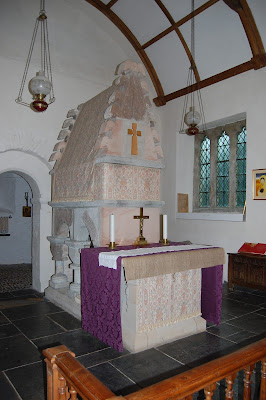 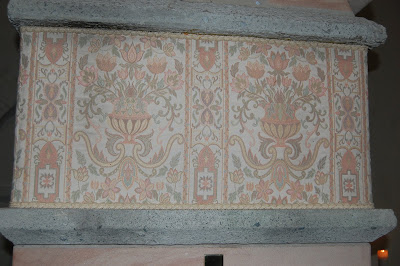 The Cell-y-Bedd was built onto the eastern end of the church in 1751, a squarish room which was used as a vestry and, later, a schoolroom, and entry was through a door from the churchyard, there was no direct access from within the church.  In the 1950s the room was repaired and strengthened and a new floor was laid and excavations revealed the foundations of an apse, a rounded chamber which predated 1751.  More exciting than that, however, was the discovery of a significant grave, believed to be that of St Melangell herself.  Her shrine was reconstructed there at that time.  Three decades later, the Cell-y-Bedd was declared unsafe so it was taken down and replaced by a new apse, built with the eighteenth century stones on the original twelfth century foundations.  The original doorway through the east end of the church into the old apse was discovered, reclaimed and named St Melangell's Door and the shrine was rebuilt in the chancel.  The architect of this work was Robert Heaton, who had overseen the restoration work carried out in 1958 and so knew and understood the building well. 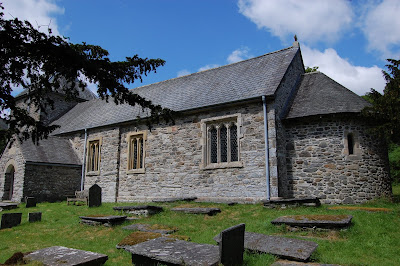 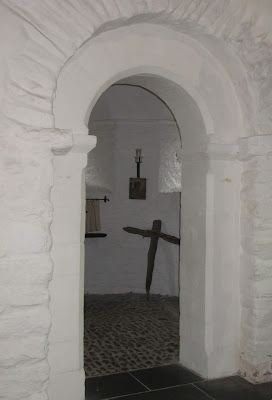 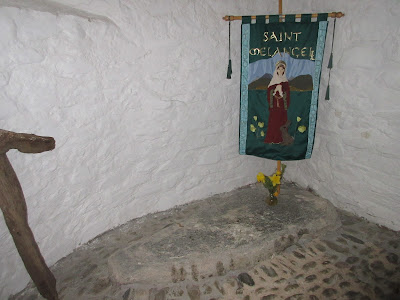 The physical manifestation of all this history and legend was almost lost: after years of neglect, by 1987 the church was in such a bad state that it was too far gone to be repaired so the options were either a full restoration or to let it go completely.  The church council wanted to take the roof off and let nature take its course, considering that to be the easier option, but Rev'd Paul Davies and his wife, Evelyn, loved the place and with tremendous drive and determination, secured funding to completely restore the church, which was done between 1988 and 1992.  Paul wrote this:

"St Melangell's Church attracts a constant procession of visitors throughout the year. The absence of any facilities and its situation ensure that almost every one of them is more a pilgrim than a casual visitor.  There are no passers-by and many come again and again.  They seek and find peace, tranquillity, "tangnefedd", to quote their own words.  This is more than silence and isolation, and is recognised by many who do not attend church regularly. "

I have looked up the translation of "tangnefedd" and it is "serenity".  Since the restoration, people have continued to visit.  There are scallop shells to remind us that this is a place of pilgrimage, prayer requests sit in the base of the shrine, tealights are lit in prayer.  On my second visit I chatted with a woman who has leukemia and told me that she visits whenever she can to sit in the church, write and pray.  I am obviously not the only person who finds this place special. 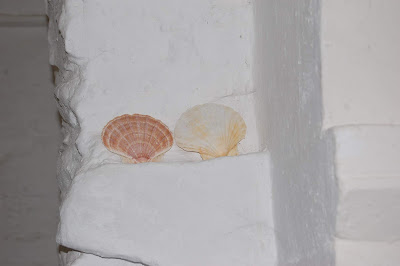 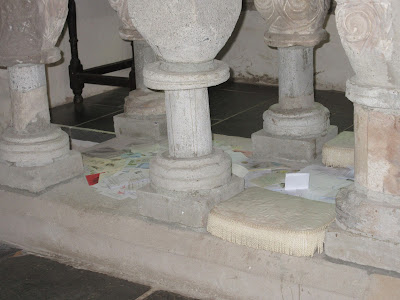 You can find out more about Pennant Melangell here.  There is a lot to see for such a small building and if you visit, there is a fascinating exhibition up in the tower which tells the history of the church and the village and there is a little shop area in the base where you can buy postcards and cards.  It doesn't feel at all inappropriate. 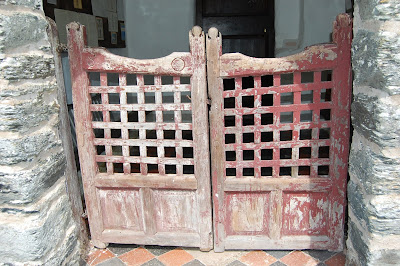 The gates are bear the initials EM and SO and are dated 1763. 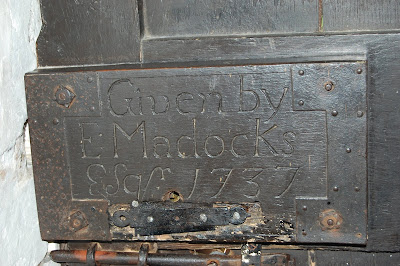 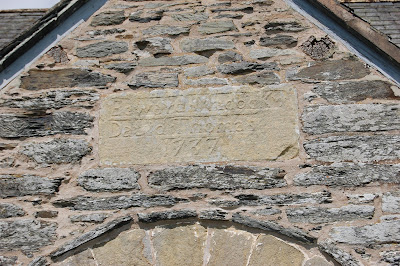 Edward Madocks and David Thomas were the churchwardens when the porch was built in 1737. 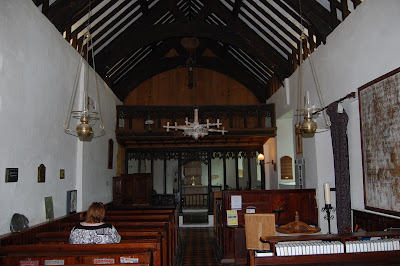 You might want to sign the visitors' book, because you can read and write; a few hundred years ago some visiting pilgrims left their mark by carving round their boots in the top of a grave slab outside the south wall of the church, at the east end. 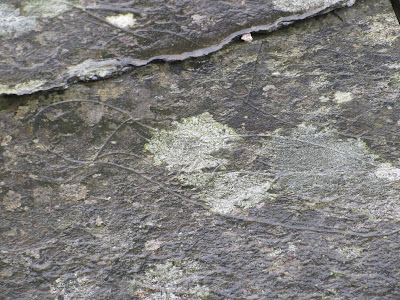