Hello, thank you for popping in.  It feels as if it has been raining for days here and although yesterday was the first day of winter, it's not cold.  It looks as if we are in for another mild, wet Christmas.  Bah, humbug!

Christmas has become a difficult time of year for me over the last few years and my Christmas Spirit has been elusive this time.  In an effort to find it, I have been drinking my tea from a festive mug every morning this month, but that didn't help.  I have put the Christmas cards we have received up on the bookshelves in the front room so that their jolly images greet me whenever I enter the room, but that didn't help, either.  The Best Beloved bought some mince pies for me (he doesn't eat them) and got the little mince pie plates out of the dresser, but nor did that help.  For the first time I can ever remember, I haven't sung a single Christmas carol and I haven't been to church since Advent Sunday.

A couple of weeks ago, I returned home and discovered a book on my doormat, posted there by a friend who described it as "delightful".  It is The Christmas Mystery by Jostein Gaarder, a children's book in twenty-four short chapters, designed to be read one chapter each day in December leading up to Christmas.  If I tell you that the characters include angels, a governor of Syria, three wise men, some shepherds and a lamb I reckon you will be able to guess what the book is about, but I haven't spoiled the story for you as the characters travel  from Norway across Europe and backwards through time from the twentieth century so there is more to be read.  I am indeed finding it delightful.  As I have read it, I have felt a little bit of Christmas Spirit seeping in.

Last weekend I found myself perusing the bookcase in the room which used to be my children's  and my eyes alighted on The Grey Family by Noel Streatfield.  A fond memory stirred.  This book was written for children in the 1950s and is a typically old-fashioned, English story about a poor family whose "ship comes in" so that by the end of the story, they are not as poor as they were.  My bookish aunt sent this copy to The Teacher just after her father began working after three years of full-time study and the timing was perfect.  I have never forgotten this opening paragraph of the book's final chapter, which is the reason why I smiled. -

"Christmas is always a glorious day, but that Christmas was the nicest the Greys could remember.  It was as if, without knowing it, the family had been wearing too tight a coat, which had suddenly burst open and allowed them to feel how pleasant it was not to be buttoned up in too tight a coat.  The reason why they felt like that was that they were just a little bit richer."

I took the book down from the shelf, settled down with a mug of tea and read it in a couple of hours.  A little bit of Christmas Spirit seeped in.

The third book I have been reading this month is A Christmas Carol and Other Stories by Charles Dickens.  Like most people of my age, I have read A Christmas Carol before, several times, but this volume, which I bought a few years ago in a charity shop for the grand price of 50p, also contains The Chimes and The Cricket on the Hearth, which I hadn't read.  After the phenomenal success of A Christmas Carol in 1843, Dickens published a similarly themed novella each December for the next four years and these are the first two of those.  I am saving A Christmas Carol for Christmas Eve but I have read the other two stories, and as I did so, a little bit of Christmas Spirit seeped in.  I should have worked it out sooner, really, that in this year when I have rediscovered my reading mojo, my Christmas Spirit would be unlocked by books. 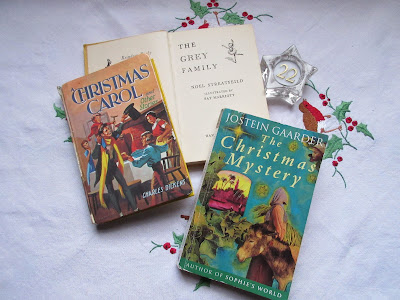 Yesterday was the day of the winter solstice and, as has become our tradition, we brought in and decorated a Christmas tree.  We decorated our festive mantelpiece and lit all the candles in the evening, acknowledging the lengthening of the days and the return of the light.  As I sat contemplating it all last night over a glass of mulled wine I realised that I have been rather selfish; I may not be interested in celebrating myself, but my family love this time of year - The Most Wonderful Time of the Year [ding, dong, ding, dong] - and that's why I do it, for them, because I love them.  As that light bulb went on, a great deal of Christmas Spirit flooded in and overwhelmed me. Yep, I'm ready to sparkle and shine.  Bring it on. 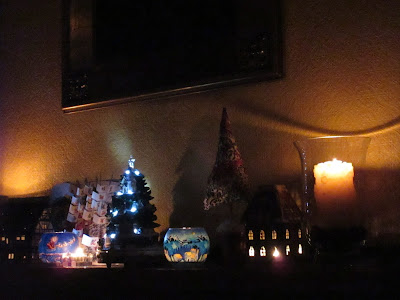