Hello, thank you for calling in and thank you for your comments on my last post.  I am very happy indeed to have discovered that some of you are ABBA fans too, especially with Eurovision on the horizon (I am already planning my menu).

After Easter, the Best Beloved and I went off to Anglesey for a little glamping break.  The last three months have been a bit of a struggle for me so this was supposed to be a restorative treat and I am happy to say that it was exactly that.  We arrived on Tuesday in 24 degree heat and sat on the little terrace outside our camping pod drinking chilled wine and eating bread, smoked salmon and little salady bits and pieces as the sun set over the field; then we lit a fire and stayed outside until the cockchafer beetles began their invasion attempt.  Have you ever had a close encounter with a cockchafer beetle?  You might know them as May bugs and that is the point - they are supposed to emerge in May, not on 23rd April!  They are huuuuuuuge, well, about 5cm long, and you know they are near because they buzz very loudly.  They fly towards the light but they are a bit clumsy and when one landed on me I yelped and demanded that the Best Beloved remove it, which he did, to the other side of the field.  Then a second one appeared inside the pod and had to be kindly but firmly evicted with the aid of a glass and a postcard before I locked the door very firmly, closed the curtains and turned on the fairy lights.  This was my second cockchafer encounter in the last seventeen years and I still haven't really recovered from the first so I don't wish to have any more, thank you very much!

The following morning the weather was still warm enough for us to sit outside on the terrace as we drank tea, ate croissants and planned the day.  I was keen to visit Penmon Priory, a place we hadn't visited before, so off we went.  I had done my research and knew that there were a ruined priory, a medieval fishpond, a dovecote and a holy well to be found there and if you've been reading here for a while, you'll know that that's just my kind of outing.


St Seiriol (St Cyril in English) is said to have come to Penmon in the sixth century and, finding a spring of clear water pouring out of the cliff, settled there as a hermit.  However, his brothers, who were both Welsh kings, didn't think that a little hermitage was good enough for such a high-born man and so they came and had built for him a wooden church and a monastery was established there.  The spring water became known for its healing powers and a well was built around it.  Four hundred years later, the Vikings attacked Anglesey and in 971 AD the church was looted and burnt down (pillage and plunder!).

In the twelfth century a new church was erected a short distance away from the well, this time built of stone.  This church was a "clas", run by an autonomous religious community, and in about 1220 AD this clas was reorganised as an Augustinian order of canons, which meant that new buildings were added to the site: a refectory and dormitory, a place for the canons to eat and sleep.  This large block was built opposite the church, the space inbetween becoming the canons' cloister, and another building, the Prior's House, was probably built to link them, forming the third side of the rectangle.  (There is a more modern Prior's House there now which is not open to the public.)  Can you picture this?  This photo might help, taken from the fourth side of the cloister where there are now about twenty steps to take you up to visit the church - there would have been a range of buildings here too, but that's long gone.  It's quite a small complex and, I think, really quite charming. 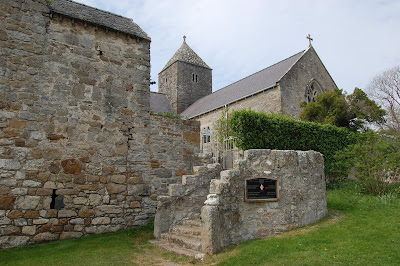 The Priory did not survive the Dissolution of the Monasteries and was abandoned in about 1537.  Eventually, the land and buildings passed into the possession of a leading local family, the Bulkeleys of Beaumaris, who enclosed the land as a deer park and allowed the church to fall into ruin.  They also built a magnificent dovecote which enabled them to breed pigeons for food.  In the 1850s the church was repaired and the chancel rebuilt as it became the parish church.

So that's the history of this special place.  The Best Beloved and I set off along the lanes and soon arrived at the car park where we happily paid the £3 fee as the site itself is free to visit.  The sun was shining and the temperature was a pleasant 19 degrees.  First we looked inside the ruined refectory, which would have had three storeys: cellars, a dining room above and a dormitory on the top floor.  The monks used to eat in silence while one of them read aloud from a window seat.  "Go on then, read to me," the Best Beloved said.  "In the beginning was the Word, and the Word was with God, and the Word was God," I said and he laughed.  Standing in front of the wall is a 12th century gravestone, as tall as I am, which had been used as a lintel over the doorway.  I placed my hand flat upon it for a few moments to imagine the echoes from centuries past. 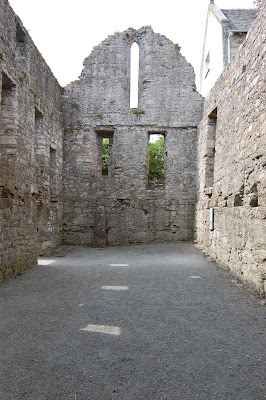 Then we climbed the stairs to the old cloister and sat on a bench, looking at the view.  It was a very pleasant spot.  (That large domed structure is the roof of the dovecote.) 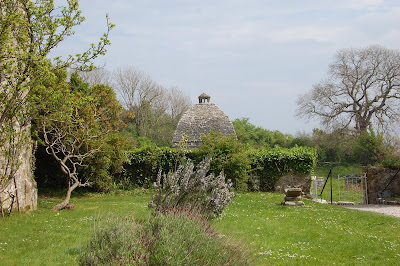 Then we went inside the church and found ourselves in the chancel, which looked quite ordinary.  I wasn't sure what all the fuss was about.

Then the Best Beloved, who had wandered off with his camera, called me.  He had gone through the door and was standing at the entrance to the south transept, clicking away.  The sight just about took my breath away, it was so beautiful. 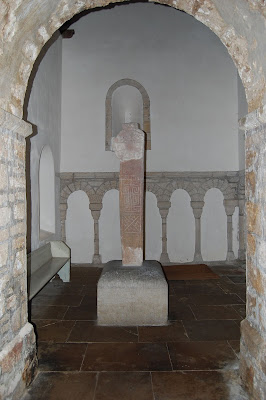 The rebuilding of the church has incorporated the arcading, which dates from 1170.  There is a stained glass window, made in the 19th century but including fragments of glass from the 15th, which depicts St Christopher, the Christ Child and St Seiriol himself.  It is the only image I found of St Seiriol in the church.  Standing in the transept is a large stone cross which dates from the 10th century, one of two which probably stood at the entrance to the old monastery which was destroyed by the Vikings.  This cross is missing one of its arms as it was removed to be used as a lintel for one of the windows in the refectory! 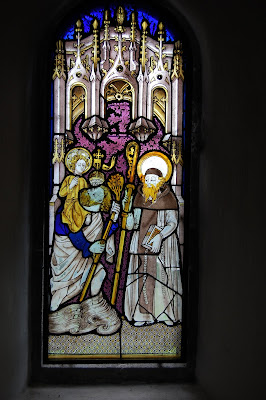 Leaving the south transept, we entered the nave of the old church, where stands the other 10th century stone cross, which stood in the deer park until 1977, and a font which may well be the base of a third cross of a similar age.  There is also a very small font dating from 1150 which was used until the big one was installed.  I really don't know how you could dunk a baby in it!  (I did wonder if it were a piscina rather than a font but then I remembered that I saw a very similar font in a Norman church last year.)  I sat there by myself for a while, it was so very quiet and peaceful. 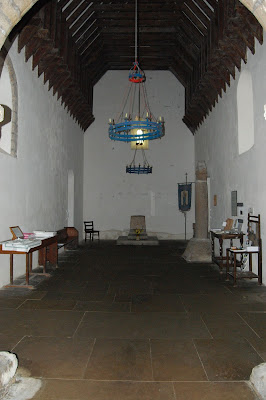 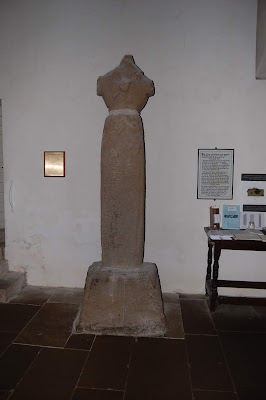 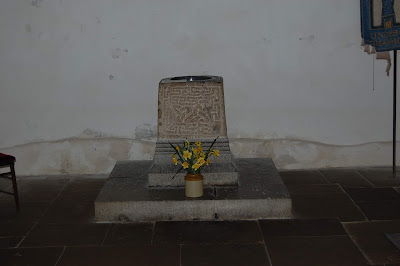 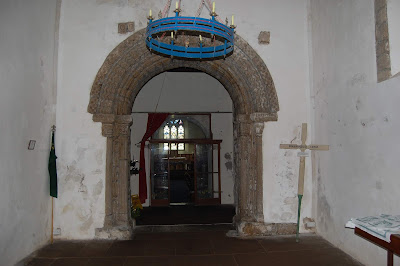 When we left the church we decided to head down to the beach and look at the well on our way back - the Best Beloved was very keen to have an ice cream and after all, we were on holiday, and the holiday rule is that you have an ice cream every day!  There is a £3 toll to drive down the road to Penmon Point but if you have paid to use the car park, you don't have to pay again.  We went to the beach and ate our ice cream in the car because the temperature had dropped to 11 degrees!  We did get out and have a little wander, which I'll show you next time, but soon it started to rain.  We got back in the car, drove back to the Priory and parked up, by which time it was raining consistently, but we are a bit daft when we are on holiday and a pilgrim like me is not to be deterred from finding a holy well by a bit of rain!  First we ran inside the dovecote - WOW!!!!!!!!!!!!!!! 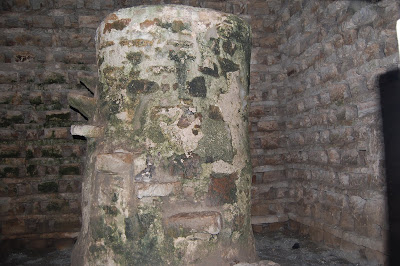 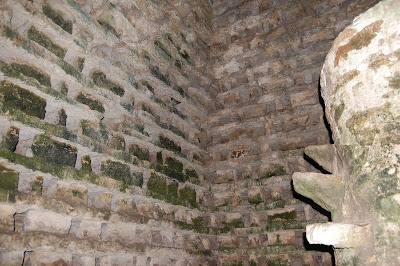 "It's like something out of Game of Thrones!" said the Best Beloved.  The pillar in the middle was a ladder which enable the pigeon keeper to climb up to the birds.  There are spaces here for 930 pairs of pigeons and the squabs would be killed at four weeks old, so plenty of meat for the Bulkeleys. 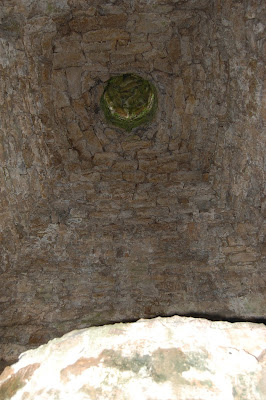 I'm sorry, it was really difficult to photograph but I wanted to give you a sense of its scale.

Then we found the footpath leading to the well, which took us around the fish pond which had been built for the monks.  Fortunately, some overhanging trees provided a bit of shelter from the rain, which was becoming heavier.  Apparently, lots of people miss out this bit of the site but really, it's worth the few minutes' walk, even in the rain!  The water in the well is still crystal clear.  The little brick "house" built over it dates from 1710 but the rest of the stonework is much, much older.  The Best Beloved must love me because he stood in the rain to take these photos and he really isn't very bothered about holy wells at all. 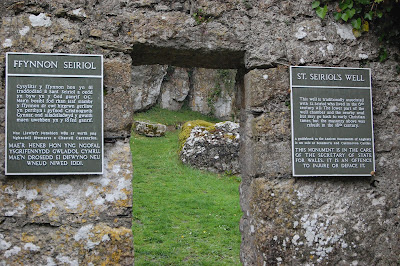 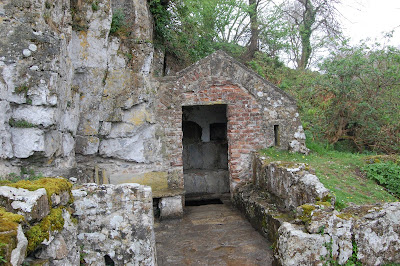 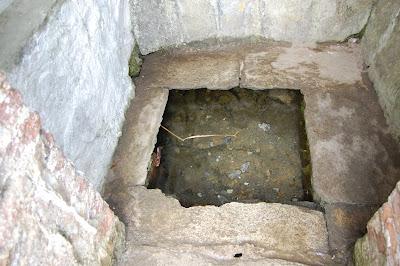 We strode back to the car as quickly as we could and fell into it.  I was soaking wet but happy because Penmon Priory is a very lovely place to visit, even in the rain.  Of course, we could have avoided getting wet by visiting the dovecote and the well before going to the beach, and that would have been very sensible, but then we wouldn't have walked on the beach, and I can't ever regret a walk on the beach, especially when there is a delicious ice cream and a lighthouse.