Hello, thank you for calling in.  The rain has stopped and I've dried three loads of washing on the line this week as we've had perfect drying weather, sunny and windy.  I do love the smell of washing which has been dried on the line and I've put out another three loads today.


I am working through my reading list and ruminating on books.  How do you buy books, if indeed you buy them at all?  I don't have an e-reader, I know that they are marvellous because you can store so many texts in very little space, which must be especially useful if you are travelling, and because you can increase adjust the font size to read more easily, but I like the physical presence of an old-fashioned book.  "Books do furnish a room," wrote the novelist Anthony Powell and I have bookcases in my sitting room, on the landing and in every upstairs room in my tiny house.  To be honest, I am a little out of control, which is why I am making a concerted effort to read down my To Be Read pile shelf bookcase and set some of my books free.  (I have a friend who is horrified by this and who has asked my why I would want to "get rid of" a single book.)  I never buy new books for myself, although having said that, I remember buying myself a book while I was doing my supermarket shop about seven or eight years ago, but that was an exception.  I buy them in second-hand shops, both bricks and mortar and online, and at fetes and stalls and any new ones I have are gifts.  However, I like to give books as gifts and I generally like those to be new.  There is something so special about the feel of a brand new book (although I really like the smell of an old book).
I don't buy books from Amazon now.  I used to but they didn't seem to know how to pack a hardback book properly and they often arrived with damaged corners so I stopped using them, especially once their staff exploitation and tax avoidance practices came to light (until I bought Nigel Slater's Christmas Chronicles earlier this year, but I am trying to convince myself that once in seven years isn't too bad.)  My favourite place to buy new books was a wonderful independent bookshop in Much Wenlock called Wenlock Books. I use the word "was" rather than "is" because the shop closed at the end of June. 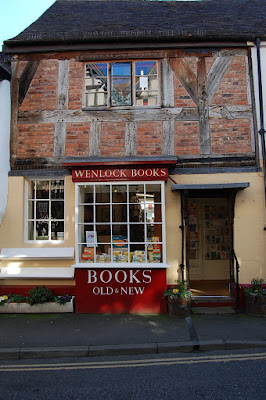 This was a wonderful shop: new books downstairs, second-hand books upstairs and a jolly children's section with a place to sit and peruse a book with a small child.  If you weren't sure what to buy, the friendly and knowledgable staff would make recommendations and there were reading groups for children and adults, children's storytime and summer reading and writing activities, author events and book signings, knitting sessions with reading (and cake!) and a monthly poetry breakfast in a local tearoom.  The shop owner, Anna Dreda, organised a poetry festival for a few years which took over the town for a weekend every Spring and where I was captivated by Andrew Motion, Benjamin Zephaniah, David Whyte and Owen Shears among other poets.  It was a lovely, lovely place and operated for twenty-eight years before Anna announced that she would have to close because the business was no longer financially viable.  Isn't that sad?  I know that high street shops are closing everywhere because people are preferring to shop online but this shop was so much more than just a shop.  Apparently, some people would come into the shop, find a book that they wanted, often with the help of a member of staff, and then say something like, "Yes, that's exactly what I want!  I'll buy it from Amazon because it's cheaper than it is here."  I am appalled by such rudeness.  Much Wenlock has lost a great asset, I think - the shop was a destination but when I went there I often visited other shops in the town as well and spent money there.  I really don't know where I'll go to buy new books now.

I visited the shop on its last day of trading.  Anna had posted on social media that she was selling off her remaining stock and invited people to come and help her to clear her overdraft.  I bought one new book, signed by its author, and nine second-hand books.  At £1 for a hardback and 50p for a paperback I just couldn't resist.  This bagful amounted to £6.50; I told Anna that it didn't seem enough, and I told her that I was beyond sad that the shop was closing. 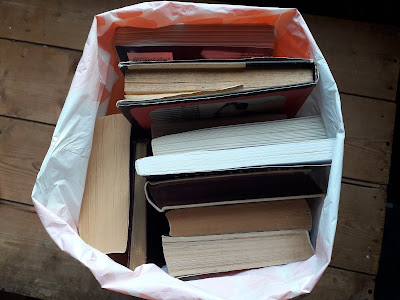 Now then, I know that I am trying to reduce the number of books in my house and I shouldn't be bringing in any more, but in my defence, some of these are gifts for other people.  Most of them, however, are for me and I don't feel in the least bit guilty about that because a book is a lovely thing.  Take this one, for instance - 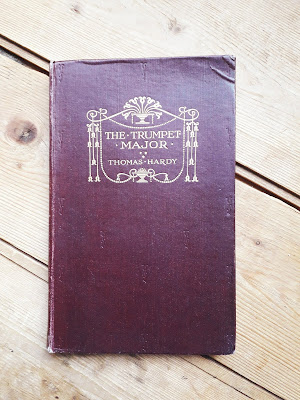 For the grand sum of £1, how could I resist it?  It's a little battered at the top but beautifully bound with gilt-edged pages and small, about the size of my hand, which is deliberate because it is a Macmillan Pocket book.  I think I've told you before do that I think a book is about so much more than the text and the way it feels in the hand can be very important.  This one feels very pleasing indeed. 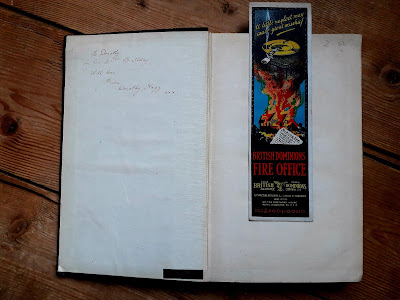 When I opened the front cover I found this inscription, which reads,


"To Dorothy,
on her 21st Birthday
With love
From
Dorothy Stagg.
xxx"
I wonder who those Dorothys were and what became of them?  I know that we are not supposed to inscribe books because it reduces their resale value but I like an inscription inside a book because it tells me something about where the book has been before it has landed in my hands.  Also inside the front cover of this book is a little sticker which announces that the book was initially sold by
S. ASCOTT
Stationer and Bookseller
36 Rye Lane, Peckham S.E.
I like that, too.  I wonder how the book travelled almost 170 miles from London to Shropshire, and with whom?  Dorothy?  And was Dorothy the owner of the bookmark I found tucked between the pages,  advertising the British Dominions Fire Office?  (The back of the bookmark outlines the "All-In" policy which included cover for Accidents to Servants!)﻿
﻿ 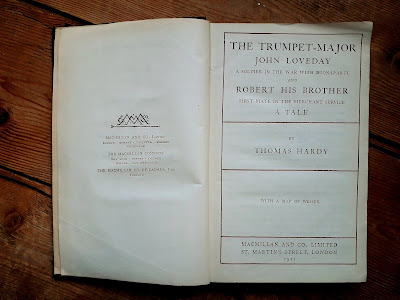 Turning over the first page, I saw this and discovered the full title of the book which I have always called simply The Trumpet-Major, and that this edition was first published in 1923.  So perhaps the mysterious Dorothy was born in 1902?
Now I should confess my guilty secret:  I already own a copy of this book.  I whispered that.  I own a paperback copy which I bought new with some birthday money in 1984.  I read it and sadly, some of the pages came adrift so as the book was incomplete, I cut out some more and used them in a craft project a few years ago.  I don't regret it at all because that made a very neat gap on my bookshelf for this little treasure.
Before I dash off, do you know about Hive, a British company which was set up in 2011 to sell new books online at warehouse prices?  If you buy something from them, you can nominate an independent bookshop and the company gives a percentage of the money you have spent to that bookshop.  If I bought something from them I nominated Wenlock Books and I would have my parcel delivered there, although you can now have your purchases delivered to your home, and when I collected my parcels I would buy something small in the shop, too.  The first time I did this I felt embarrassed and apologised to Anna Dreda but she was very gracious and insisted that it was absolutely fine and that there was no need for me to apologise because the shop would benefit from my business with Hive.  So, if you would like to support an independent bookshop in this way, and I hope you do, you can find Hive here.
I really must disappear now - I have a cake in the oven and I can smell that it's ready.  We are off on an adventure tomorrow so I wish you all a happy weekend, especially if you are able to make the most of our bank holiday on Monday, and I'll see you on the other side.
See you soon.
Love, Mrs Tiggywinkle x
Posted by Mrs Tiggywinkle at August 22, 2019