Hello, thank you for dropping in.  It's always lovely to see you here.  Christmas preparations are coming along steadily but before I get to that, I need to tell you about something which happened the night before last.  It affected me quite deeply and I'm not really sure why.  I need to talk about it.  I woke up from a difficult dream at about 2am.  We haven't closed the bedroom curtains since Maundy Thursday (9th April), I don't really know why, we just stopped closing them.  There is no privacy issue and I like seeing the sky as soon as I wake up, which is what happened in the early hours of Wednesday.  It looked absolutely spectacular, thousands of tiny pinpricks of light against a dark blue sky and the larger stars of Orion directly in front of me.  I didn't know whether my newly woken, fuzzy  brain imagined those pinpricks or not until this morning when the same thing happened - it was indeed imaginary, but glorious Orion was not, standing out against a beautiful clear, starry, deep blue background.  I feel a special connexion with The Mathematician whenever I see Orion because when she was young we would often go away for a weekend to celebrate her birthday which is in January, and as we travelled through the dark on a Friday evening, Orion would keep us company.  He is such an easily identifiable constellation that he became a bit of a totem for us.  So, in the early hours of Wednesday I lay in bed watching the sky.  As the earth turned, Orion moved out of view and Jupiter appeared through the black, skeleton branches of my hawthorn tree, the brightest thing in the sky.  I was mesmerised, my mind calmed and just as I was about to drift off to sleep, a shooting star appeared and trailed diagonally across the large central pane from top right to bottom left.  I realised that I felt very emotional and I don't really understand why.  I have seen Orion, Jupiter and shooting stars many, many times but somehow, seeing them like this, as I lay in bed, meant something more than the sum of its parts.  I felt quite peculiar and emotional all day yesterday and I haven't been able to get the images out of my head - and actually, why would I want to?  The images are beautiful.

There, I don't understand what it all means but I know that it was a special experience.  Thank you for bearing with me while I wrote it all down.  Now I would like to get back to Christmassy matters, which seem rather mundane in the circumstances!

Three years ago I knitted three pairs of Christmas socks using West Yorkshire Spinners Signature 4 ply yarn in Holly Berry, which was a soft and smooth dream to knit with.  Well, I say three pairs of socks but actually there were two pairs of socks and a pair of booties for Tom Kitten who was two months old.  The socks were for my daughters, who like to spend Christmas Eve together. 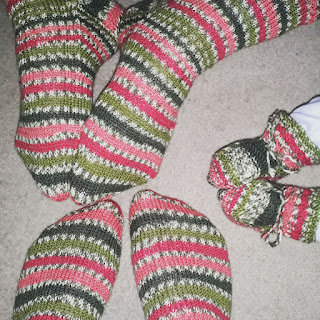 A year later Tom Kitten had, of course, grown out of his booties so I dug into my yarn stash, found the leftovers from the previous year and knitted him a pair of socks which I gave to him on Christmas Eve. 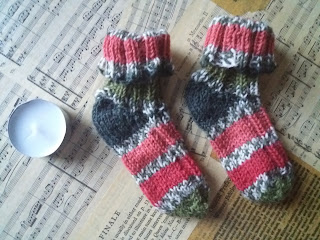 Last year his feet had grown again but there was no more yarn left so I bought a new ball and knitted him another, bigger pair for Christmas Eve.  His booties were just right for Cottontail (she does have two legs, honestly).

This year I decided that he should have his new pair at the beginning of December so that he could wear them through Advent.  Cottontail's feet have grown quickly and at seventeen months she is wearing the socks I knitted for Tom Kitten last year, when he was twenty-six months old.  The Teacher sent me this photo the other day and it made my heart sing - just look at those gorgeous little feet!

Next year I think I shall have to knit two new pairs of Holly Berry socks.