Hello, thank you for dropping in.  Here in Shropshire the weather has been sweltering hot for the last five days and I am hiding indoors with all the windows open. The heat gave me less than five hours sleep last night and I am trying my best to be patient and cheerful but it's taking a great deal of effort.  I am grateful that we have not seen the torrential rain and floods which have devastated parts of Europe and I am thinking of those families who are grieving for their lost loved ones while we have been celebrating family birthdays.  (Cottontail is two, how the years have flown, three-quarters of her life spent under pandemic restrictions.)  I have also been remembering another sweltering July almost forty years ago.

In 2019 I bought some second-hand Thomas Hardy novels at the closing down sale of my favourite bookshop and reading them rekindled my interest in the man and his writing.  I read The Trumpet Major, The Woodlanders and The Return of the Native as well as Claire Tomalin's biography, "Thomas Hardy: the Time-torn Man", and realised that I don't own a copy of the first Hardy novel I ever read, The Mayor of Casterbridge, which I studied for A-Level English a long time ago.  One evening in April I went online shopping at Oxfam and found a very nice hardback copy and a few days later, it landed on my doorstep.  (Actually, that's not true, my very cheerful postman has designated a safe place in my backyard where he leaves parcels if nobody answers the door.  He has to pass through my neighbour's property to reach my backyard so it's just as well that we're all on very good terms with each other.)  Anyway, my very nice book arrived and was soon read for the first time since 1983. 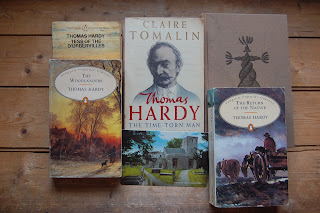 Goodness, I did love that book.  I must have had an English teacher who loved it too.  After all our exams were finished, my best friend and I packed up her tiny car, a Fiat 126, and set off to Dorset for a five-day Hardy holiday.  We camped in Charmouth, a lovely village by the sea in the west of the county.  I have delved into my wooden chest and brought out a disintegrating paper bag full of treasures gathered on that holiday so that I can share them with you. 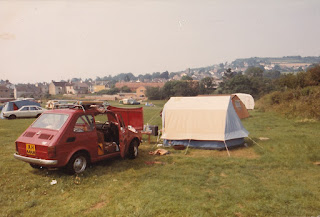 We visited Higher Bockhampton, the hamlet where Thomas was born on 1st June 1840 in a cottage built by his grandfather.  We weren't allowed into the cottage so we stood outside and here's the photo my friend took, as pretty as the postcard and probably a lot prettier than it looked in 1840. 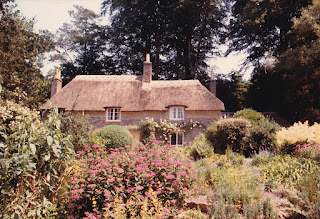 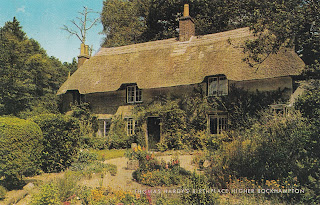 This postcard published by J. Salmon Ltd. of Sevenoaks.

I don't actually remember us visiting Dorchester but I think we must have done because Dorchester is the fictional Casterbridge in both The Mayor of Casterbridge and Far From the Madding Crowd, which I read while I was on this holiday, so it would have been an important place in our pilgrimage...and I have these leaflets (Barbara, I am thinking of you here).  The Dorset County Museum holds a significant number of Thomas' artefacts and papers, including his desk in a recreation of his study. 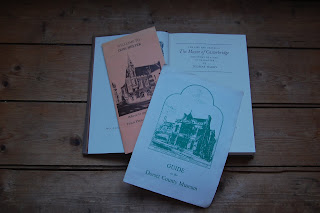 I do remember our visit to Maiden Castle, an expansive Iron Age hill fort a couple of miles outside Dorchester which features in The Mayor of Casterbridge and Far From the Madding Crowd.  If you have read the book or seen any of the film or television versions you might recall the handsome Sergeant Troy flashing his sword around?  That scene happened at Maiden Castle. 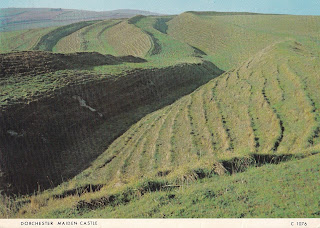 This postcard published by Judges Limited of Hastings.

The fictional village of Kingsbere is mentioned in both Far From the Madding Crowd and Tess of the d'Urbervilles, which I had read before we took this trip, so a visit to Bere Regis, its real counterpart, was a must.  The Turberville family became wealthy and influential here in the fourteenth century and their vault is in the Church of St John the Baptist.  I'm sure you can see the similarity between Turberville and d'Urberville and the church features in this novel.  In Chapter 52, Tess and her family have nowhere to stay and set their bed in the churchyard, against the wall of the church.

"Tess listlessly lent a hand, and in a quarter of an hour the old four-post bedstead was dissociated from the heap of goods, and erected under the south wall of the church, the part of the building know as the d'Urberville Aisle, beneath which the huge vaults lay. Over the tester of the bedstead was a beautiful traceried window, of many lights, its date being the fifteenth century. It was called the d'Urberville Window, and in the upper part could be discerned heraldic emblems like those on Durbeyfield's old seal and spoon." 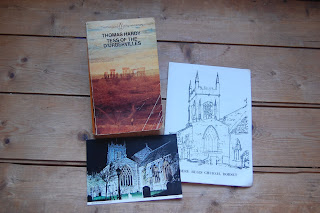 This postcard published by Judges Limited of Hastings.

Adjoining Bere Regis is the parish of Wool.  Tess and Angel Clare spent their wedding night at Woolbridge Manor, renamed Wellbridge House in the novel, the home of the Turbervilles, some of whom are buried at The Church of the Holy Rood. 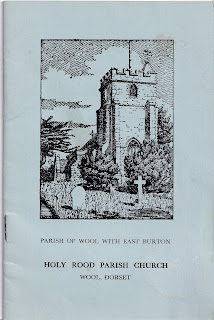 Thomas Hardy died at his home, Max Gate, near Dorchester, on 11th January 1928.  He wished to be buried in the churchyard at Stinsford where his grandparents, parents, sister and first wife, Emma, already lay but his friend and literary executor, Sydney Cockerell, felt that he should instead be buried in Westminster Abbey because he "belonged to the nation" and persuaded Thomas' family to agree.  The Abbey insisted that it could not inter Thomas beneath the floor but said that if he were cremated, they would be able to accommodate a small urn containing his ashes.  The vicar of Stinsford suggested to the family that Thomas' heart could be cut out and buried in his churchyard before the cremation and on 13th January a doctor, surgeon and nurse went to Max Gate and performed that operation.  The rest of Thomas Hardy was cremated the following day and both funeral ceremonies took place on 17th January, one in sunny Dorset and the other in rainy London.  So my pilgrimage ended at St Michael's Church in Stinsford, less than two miles from Higher Bockhampton. 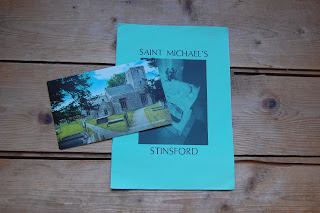 This postcard published by J. Salmon Ltd. of Sevenoaks. 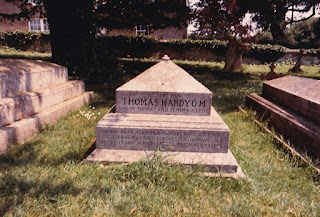 West Dorset really is lovely and we visited other places too, spending time on the beach and at Barney's Fossil and Country Life Experience in Charmouth and visiting Durdle Dor and Abbotsbury Subtropical Gardens.  I considered showing you some of those photographs but decided against it because the main focus of the holiday was our Hardy Pilgrimage.  We also went to Wyke Regis and paid a surprise call on my aunt and uncle who kept a pub there.  I returned to Charmouth for a holiday with my family twenty-six years later and I telephoned my aunt and suggested we meet up. She asked where I was staying and when I replied she said, "You've stayed there before."  I think it might be time for another visit, and perhaps another Hardy novel.
See you soon, and do take care.
Love, Mrs Tiggywinkle x
Posted by Mrs Tiggywinkle at July 20, 2021