Hello, thanks for calling in, it's lovely to see you here.  If you are expecting to see a post about my progress through my summer list during the third week of the school summer holiday I'm afraid you might be disappointed because I made no progress whatsoever.  Actually, that's not strictly true because I did read a book, but I didn't finish it so I can't tick it off the list yet.  There are still eleven things left on the list and three weeks of the holiday left so I'd better get a move on.  No, the list took a back seat last week because...we were on holiday with our children and grandchild in the Lake District.
We had a wonderful time together.  There is so much to do in Cumbria that I feel we barely scratched the surface of the area and I'd like to go back there to do some more.  There was boating, walking, fishing (not me), ghyll scrambling (definitely not me), museum visiting (definitely me), reading and knitting (both obviously me).  There was also a great deal of "Ooh, ah, look at the view!"  We stayed in an old farmhouse, self-catering, and in the evenings we enjoyed sitting around the table together, playing board games and chatting in the hot tub.  I'd like to show you some of the views we enjoyed. 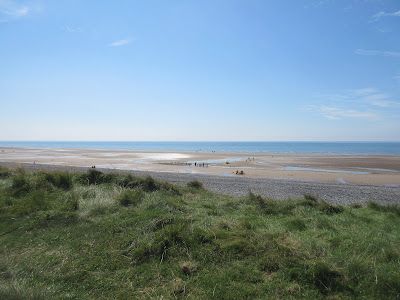 On the first day the sun beat down and we headed to the beach at Silecroft.  With a free car park, a wickedly good ice-cream shop, warm sea and sand that was perfect for building castles it met all of our needs and we couldn't understand why there weren't more people there. 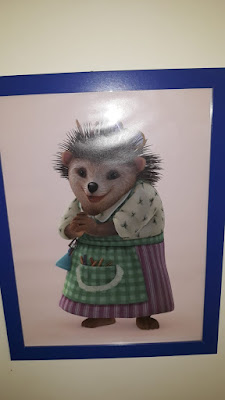 On the second day some of us went to Wray Castle, a National Trust property on the shore of Windermere in which Beatrix Potter enjoyed a summer with her family when she was a teenager.  Those who went on this outing reported that it was brilliant for children of junior school age but that I would have hated it.  This photo probably sums up why.  Honestly!  The Best Beloved sent it to me with the caption, "Look what they've done to Mrs Tiggywinkle.  She looks like Mrs Overall."  If you are familiar with Julie Walters' character in Victoria Wood's Acorn Antiques, you will understand. 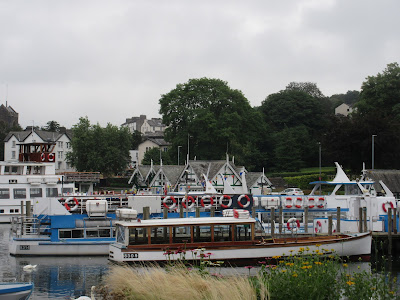 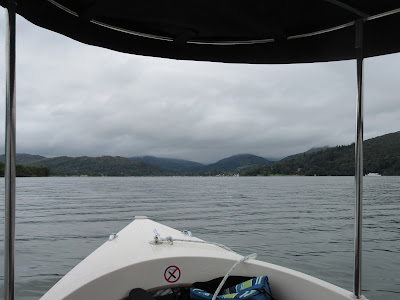 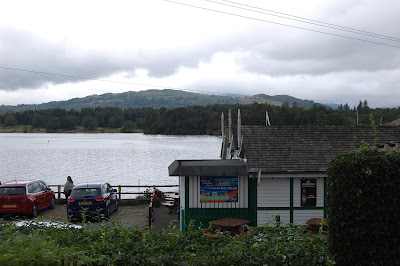 On the third day we drove to Bowness-on-Windermere first thing in the morning and collected a little boat.  We pootled around the lake water all day, mooring up at public jetties and hopping on and off wherever we fancied, with a longer stop in Ambleside for lunch.  We all enjoyed it except for Tom Kitten, who doesn't think he likes boats and knows he doesn't like cumbersome life jackets, but everyone else thought it was a holiday highlight, despite the grey sky and the grey water. 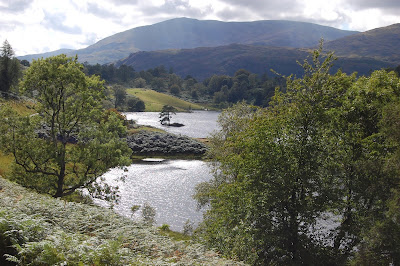 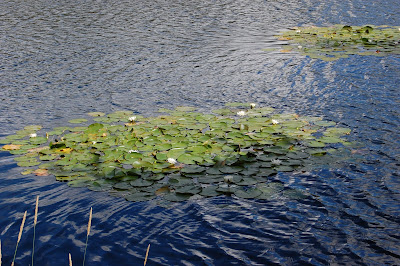 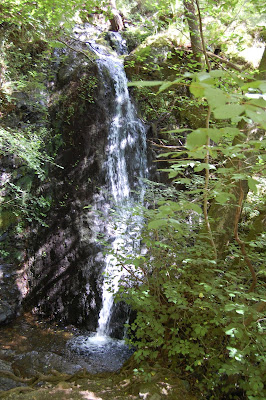 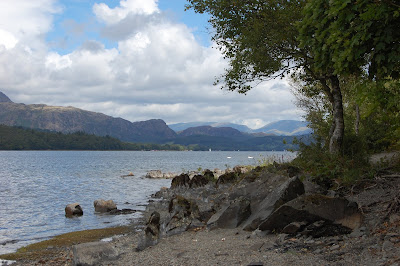 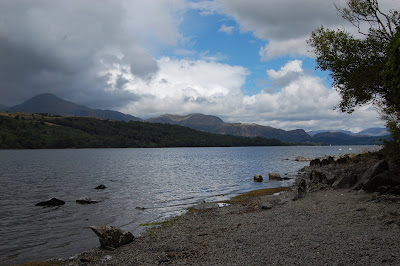 On the sixth day some of us went to Coniston Water and then visited the museum in the village.  I like a local museum, you usually learn the history of a place and how that has informed its present and I thought this one was very good, full of information about copper mining, quarrying, climbing, John Ruskin, Arthur Ransome and Donald Campbell.  The Best Beloved was especially keen on the Donald Campbell gallery and I thought about my sister, who loved Ransome's Swallows and Amazons when she was young and became a sailor when she grew up.
On our last night there something magical happened: the Best Beloved and I went outside and sat in the garden at around midnight, craning our necks to look at the spectacular starry sky.  With no light pollution and no clouds the stars were vivid points in the darkness, and the Milky Way arched above the white farmhouse as far as we could see.  We watched three satellites steadily moving across the sky and then, best of all, shooting stars, meteors from the Perseid showers. 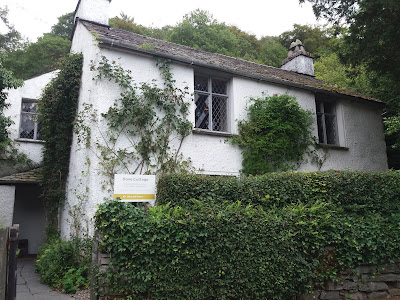 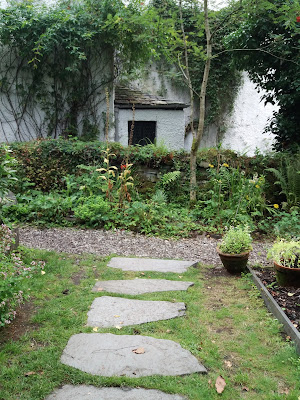 On the seventh day some of us went to Grasmere and visited Dove Cottage in Town End where William Wordsworth lived with his wife, sister, sister-in-law and three children while visitors including Samuel Taylor Coleridge, Robert Southey and Sir Walter Scott came to stay in the spare bedroom.  It must have been a bit of a squeeze.  We had a guided tour and our timed ticket told us to knock on the front door five minutes before our tour was due to begin but I was disappointed to find the door already open and the guide waiting, so she very kindly closed it so that I could knock and ask if Mr Wordsworth was at home!  If you have even a passing interest in Wordsworth I recommend this visit, it's very well done.  There is a museum too, but we didn't have time for that so I told the Best Beloved that we would have to return another time!  Here are some more photos of the interior of the house - it's quite dark, flash photography is not allowed and the Best Beloved took them on his 'phone so please make allowances. 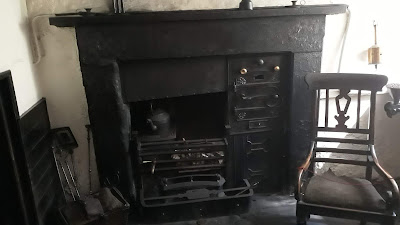 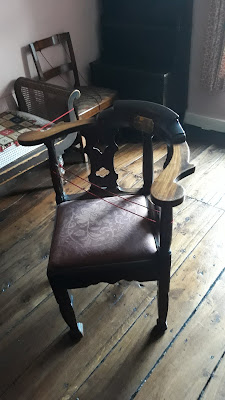 This is Wordsworth's favourite writing chair, in which he would sit in the evenings and write after a day spent walking outdoors. 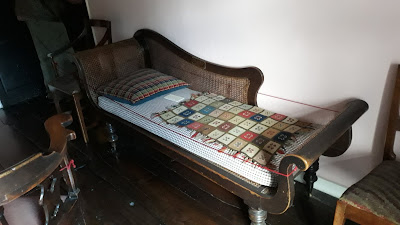 ﻿
"For oft, when on my couch I lie
In vacant or in pensive mood,
They flash upon that inward eye
Which is the bliss of solitude;
And then my heart with pleasure fills
And dances with the daffodils."
We don't know for certain that Wordsworth was referring to this couch BUT this couch was in the sitting room then and, as the guide says, how many couches would he have had?!  I am the only person for whom this was a holiday highlight and that's fine.  I loved it.
Then we came home and it poured with rain but we didn't mind because we had enjoyed a wonderful holiday.
Of course, there is somewhere else I visited too, and I expect you may be able to guess where it was, but I shall save that for next time because it really deserves a whole post of its own.
See you soon.
Love, Mrs Tiggywinkle x
Posted by Mrs Tiggywinkle at August 14, 2018