Hello, thank you for popping in here and thank you for comments on my last post - you're lovely.  The heat has faded and the garden has thirstily gulped down the rain we have had.  In any other summer I would be quite happy with the temperatures (and the amount of rain, it really hasn't been much) but now that I've acclimatised to the extraordinary heat we have had over the last two or three months it feels a bit disappointing.


The atmosphere here last week was quite intense.  The Mathematician was due to begin her new, post-graduation, grown-up life in Guernsey at the end of this month but on Monday her employer rang her and asked her to start work there on 21st, giving her just four days to sort out and pack up her belongings before sailing from Poole on Saturday.  That girl is amazing.  For twenty-two years she has slept in the same bedroom and now it's almost empty.  Deliveries were made to the charity shop and the recycling centre, a bonfire was lit, a couple of boxes have been stored away and the rest of her life was packed into her little car.  Her father and I were on hand for practical and emotional support and my chick fledged at 3.30am on Saturday.  My nest is empty; the Best Beloved is holding me up.
Amidst the stress, there was an outing: I returned from my holiday to discover that some friends had arranged a trip to Middleport Pottery in Stoke-on-Trent to see Poppies: Weeping Window and that they had booked a ticket for me, too.  I have lovely friends!  You might remember that I went to Hereford Cathedral in April to see this sculpture, which formed part of Blood Swept Lands and Seas of Red at the Tower of London in 2014, and its companion piece, Poppies: Wave, at Fort Nelson near Portsmouth in June.  Poppies: Weeping Window is at Middleport until 16th September and this is the last stop of the regional tour before the sculpture goes to the Imperial War Museum London, which will be its permanent home. 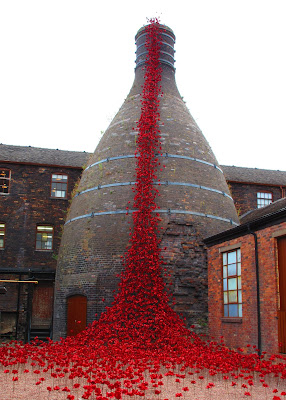 As I stood in front of the kiln I had an acute sense that each poppy represented a soldier at the front, tramping through mud, doing his duty.  We are now into the last 100 days leading up to the centenary of the Armistice on 11th November and I am commemorating this in a number of small ways, my visit to Middleport being one of them.  As I did in Hereford and at Fort Nelson, I stood in front of the sculpture and read aloud Dulce Et Decorum Est by Wilfred Owen, I played The Last Post on my 'phone and I hoped that the smiling people who were having their photographs taken in front of the poppies understood what the artwork they had come to see was all about.
There is a "reflection room" at the pottery in which you can write or draw your thoughts and feelings about the sculpture on a postcard and then hang it up on a sort of washing line (Siegfried Line?).  Some people had written familiar clichés but I suppose that if a cliché exactly expresses how you feel, then there are no other words to use. 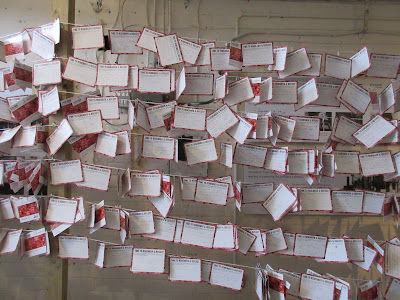 We tried the Tea Room and we were not impressed: it seemed to be entirely staffed by young people who were neither experienced nor efficient and we queued and waited for almost half an hour for four hot drinks!  Moreover, as we were sitting outside and ceramic cups were not allowed to be taken outside, we were given our drinks in disposable cardboard and plastic cups, which felt ridiculous in a working pottery!!

6.  Make A Mojito Key Lime Pie
With all the sorting out and gallivanting going on I only managed to tick one thing off my summer list: I made a mojito key lime pie.  Now that there are only two of us at home and we are trying to eat more healthily I rarely do any baking so it's a bit of an event when I do.  I saw this recipe in a newspaper a couple of years ago and made it for a party where it went down a storm, but I haven't made it since.  I sort of need an excuse to make it and a family barbecue to bid farewell to The Mathematician last week was it.  My biggest difficulty with the recipe was knowing which flan dish to make it in as the recipe calls for "a standard size pie dish".  What on earth does that mean?  I wouldn't have had such vague flimflam from Delia Smith, she would have given me a measurement.  Having decided that my 25cm dish was too big I settled on the 15cm dish but when I tipped in the biscuit crumb mix and it filled the dish to the brim I realised that was too small so I hastily tipped it into the only other suitable dish I have, which has a diameter of 23cm.  To be honest, that was still a little too big as I had to spread the crumbs very thinly (not a bad thing) and the filling was a bit too shallow (not a good thing).  However, the pie was universally declared to be delicious.  Flavoured with rum, lime and mint the mojito lovers declared that it tasted "just like a mojito".  I received a large amount of praise for a small amount of work (but I didn't let on) and I seemed to have made everyone happy - an excellent result, I think! 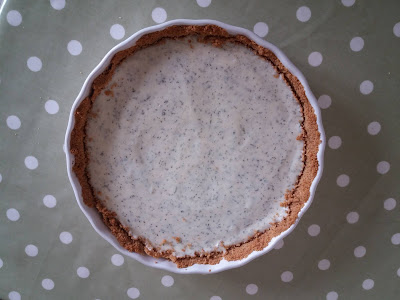 The recipe suggests decorating the pie with whipped cream but I didn't do that because the filling is made from soured cream and condensed milk and I don't really like dairy with dairy.  However, it would benefit from prettifying and it would be enhanced by something, I just can't decide what.  Perhaps a granita?  Anyway, The Mathematician sent me a message on Tuesday morning asking for the recipe.  I sent her the link and at 7.51pm precisely she sent me this photograph. - 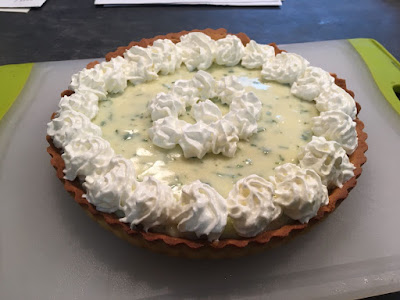 Isn't she a star?  Rather than making a biscuit crumb crust she bought a sweet shortcrust pastry shell and once her pie was baked and cooled, she decorated it with squirty cream.

The website which originally provided this recipe no longer exists and the one which currently bears it is closing down at the end of September so if you'd like to have a go at making this mojito key lime pie, you might want to save the recipe somewhere.  (Obviously, being a bit old-fashioned, I have the copy which I carefully cut out of the newspaper and stuck into a folder with glue.)  You may also wish to make a note of the fact that although the recipe calls for "good quality white rum", I used a supermarket's own brand and it was fine, although I did double the recommended quantity for extra "oomph"!
So, with a fortnight left of the school summer holiday that's six items ticked off the list and ten still to be tackled.  Hmm, it's beginning to look a bit challenging (although today is Thursday and I've already completed three items this week!).
See you soon.
Love, Mrs Tiggywinkle x
Posted by Mrs Tiggywinkle at August 23, 2018