A Weekend of Remembrance

Hello lovely reader, thank you for sticking with me.  October seemed to fly by and I'll tell you all about that soon, but right now I need to talk about Remembrance while we are still in the mood.  When I was young, Remembrance Sunday meant church parade in my Brownie/Guide/Ranger uniform, with a shiny ten pence piece in my pocket to place on the collection plate when it passed by me.  In recent years, the Best Beloved and I have attended the Act of Remembrance at our local war memorial; our community does this well with a parade including a band, civic dignitaries and members of uniformed organisations as well as the local branch of the Royal British Legion.  The parade marches around the streets to the war memorial where a crowd gathers and the local clergy lead the Act of Remembrance including The Last Post, the laying of wreaths, the two minute silence, prayers and the singing of Oh God, Our Help In Ages Past.  After that, there is a service in the Methodist Chapel and then the parade reforms and marches past whoever is taking the salute.  It is properly done and We Remember Them.

This year, as you may know, I have done several things to commemorate the centenary of the end of The Great War: I have read Pat Barker's Regeneration trilogy, I have visited the ceramic poppies installations Weeping Window and Wave, I have been to an illustrated talk and, most importantly, I have told the stories of the men of my family who served in the British Army.  I think I have told you before that the Best Beloved says we are a Thankful Family as our men came home.  In fact, we are a Doubly Thankful Family as our men came home from the Second World War, too.  So, I wanted to do something special on Armistice Day itself.

Last month I discovered that a group of people at St Eleth's Church in Amlwch on Anglesey had created a cascade of knitted and crocheted poppies, with more decorating the interior of their church, the shop windows and the port and harbour.  This was a community project which brought people together over nine months to create more than 24,000 poppies in red, purple and white (to remember the fallen people and animals and to hope for peace).  I was keen to go and see it but my diary was almost full and the only weekend I could visit was Remembrance Weekend itself.  I tentatively consulted the Best Beloved and the lovely man suggested we book somewhere to stay and go for the whole weekend - so that's what we did.  We booked a glamping pod so that we didn't have to pay to eat out and on Friday we drove for three hours through high winds and rain before arriving here.

On Saturday we drove to Amlwch and found the church busy.  Displays inside told local and national stories, somebody played old tunes on the piano, hot drinks and cake were available.  I met some of the amazing women whose fingers have been so busy this year, the Poppettes, and found them warm and welcoming.  When I told them that I had seen Weeping Window at Middleport Pottery and at Hereford Cathedral they asked me how their cascade compares and I told them that theirs is better because it has brought a community together, and I meant it.  Amlwch has done Remembrance very well.  If you'd like to see more, search for Amlwch Poppy Project on Facebook.  If you'd like to visit, the church is open on Thursdays, Fridays and Saturdays until 24th November.  Here are some pictures - 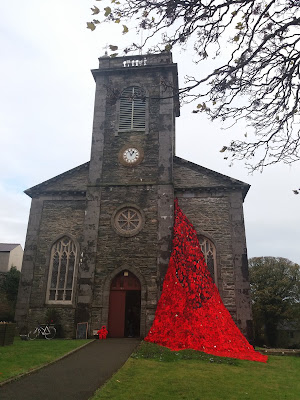 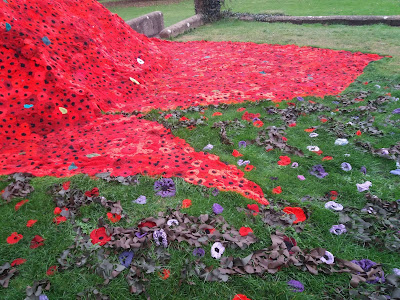 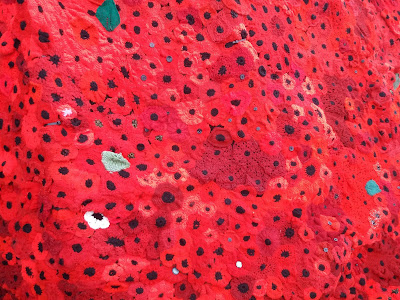 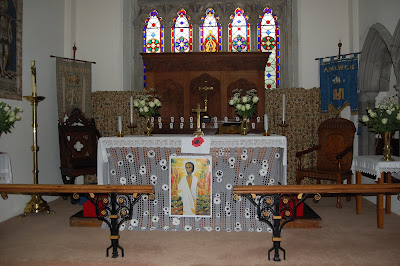 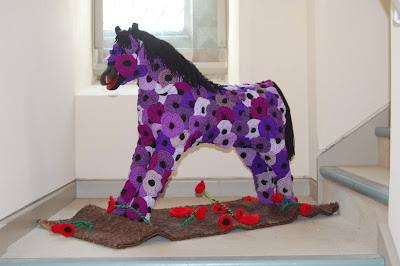 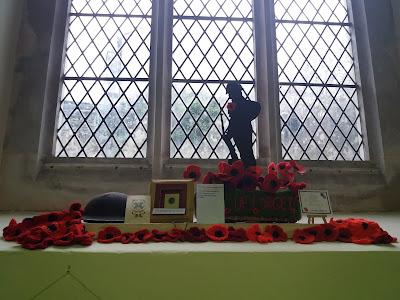 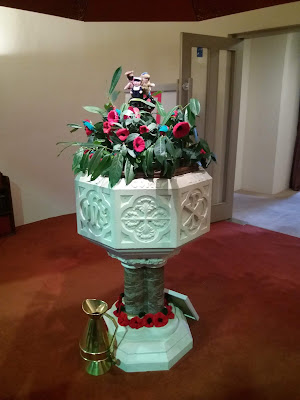 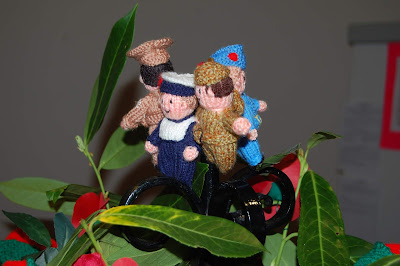 On Sunday morning we learned from the television that the peace treaty was signed at 5.10am on 11th November 1918 and we felt angry that the guns kept firing and killing men until 11am, the agreed time for the cessation of hostilities.
We attended the Act of Remembrance at the war memorial in Llanfairpwllgwyngyllgogerychwyrndrobwllllantysiliogogogoch (I always think of my Auntie Susan when I read that because she was the only person I knew who could recite it!) or, as the locals call it, Llanfair P.G.  There were about one hundred of us there, spilling out messily across the road so that the traffic had to stop as a robed clergyman spoke in Welsh and English and we said The Lord's Prayer in whichever language we chose.  Two boys played The Last Post on their cornets, one significantly better than the other (I wish they wouldn't do that, significant occasions are not really the time to let someone "have a go") and then we kept the silence for two minutes.  When the buglers started again, the sun came out from behind a cloud and I looked at the clock on the memorial and saw that it was 11am; we had kept our silence ahead of the rest of the country!  Wreaths were then laid (while the rest of the country kept silent) and afterwards, photographs were taken, and each of the military personnel posed individually in front of the memorial with his or her family.  It was all a bit casual and a bit ordinary and a bit eccentric and I didn't mind that one bit.  The war memorial itself contains marvellous detail about all those who are remembered there, I've never seen one like it. 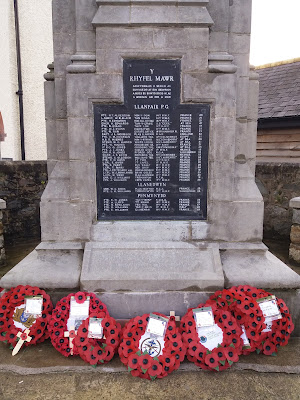 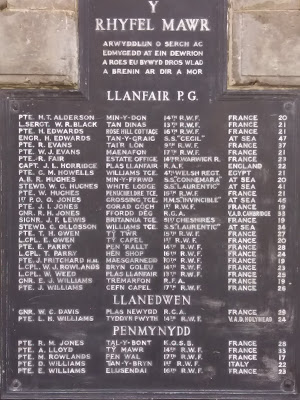 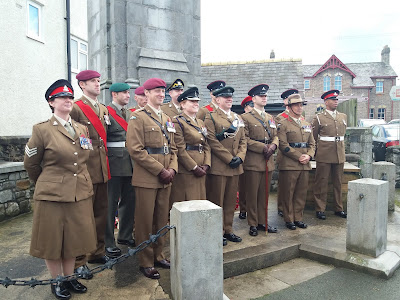 As the sun was still shining, we drove to the woods in the hope of seeing some red squirrels.  They were hiding but we did see chaffinches, great tits, a robin and a pair of jays. We sat on a bench, listening to the birds, as the sun lit up the yellow leaves and I realised that this was the first time I had been in the woods this autumn.  I just drank in the colours and sounds.  Then we went to the Riverside Arts & Crafts Café in Malltraeth where I drank in a mug of hot chocolate and ate a piece of delicious coffee cake which was served, to my delight, with a proper cake fork. 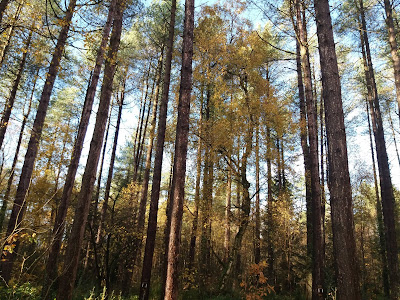 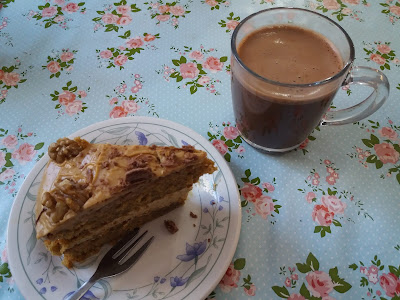 Suitably fortified, we went to the beach so that I could sit on a bench in my big coat, scarf and gloves and drink in the sight and sound of the sea while the wind tried to batter me to pieces.  In the past, beaches on the west coast of Anglesey have presented us with the sights of a dead porpoise, a dead adult seal and a dead leatherback turtle and on Sunday the tally grew as we found a dead seal pup.  I was a bit upset by this but then we saw a young herring gull pecking at it, looking for a meal, and the Best Beloved said, "It's the circle of life," and I felt more rational.  My photos do not include the seal pup. 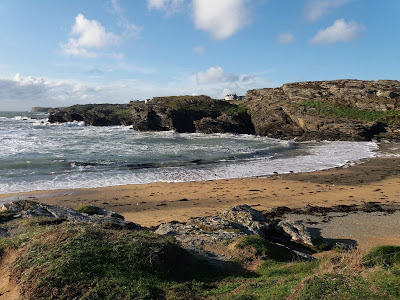 We had not yet finished Remembering.  I really wanted to go to a Battle's Over event, a thousand beacons were to be lit across the country at 7pm and I was very disappointed to discover that there wasn't one in my Shropshire patch so, as we had to travel anyway, we decided to attend one on Anglesey.  There was a choice of two and I found it hard to pick one, only making up my mind a couple of hours beforehand.  We went to Beaumaris where, again, the crowd was small.  In the centre of Castle Square, three soldiers stood to attention while a man played The Last Post very beautifully and movingly on a cornet as the Royal British Legion standard was lowered.  Then, we looked to the castle ramparts expectantly where three men took what seemed like a very long time to light the beacon.  It was tiny and after a few seconds, it fizzled out.  They tried again and as the flames burned, we applauded, but again, they died after a few seconds.  It was pathetic, really, and left us all waiting awkwardly for several minutes until the bells started ringing at the church and the school, ringing gloriously across the town.  "It's over," I said to the Best Beloved, "The boys are coming home!"  At this point, I felt that everyone should all go to the pub together, or have a party, or sing together.  I later discovered that at some of the other beacons, people had sung It's a Long Way to Tipperary and Pack Up Your Troubles; I should have liked that.  Instead, everyone just scurried away.  If you click on this photograph and look very carefully, possibly with a magnifying glass, you might be able to see a pinprick of light above the castle ramparts, in the centre.  That is the so-called beacon. 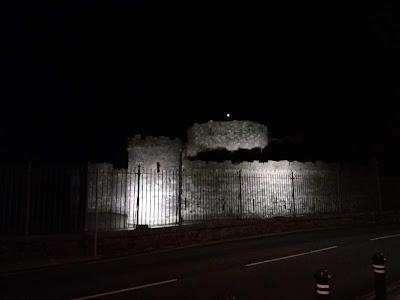 So we drove back to our warm and toasty glamping pod, opened a bottle of wine and drank a toast to the men and women who did their duty during The Great War.  We turned on the television and watched Peter Jackson's film They Shall Not Grow Old in which he has colourised documentary footage of men in the trenches and matched it with audio recordings of men who were there.  The film is utterly brilliant and I think it should be shown in secondary schools - if you would like to see it, it's on the BBC iPlayer for a few more days.

All day long I thought about Wilfred Owen's mother, Susan, who received the news of her son's death while the church bells were ringing out to celebrate the Armistice on 11th November 1918.  Wilfred had been killed on 4th November.  I thought, too, about my great grandmothers, who must have been overwhelmed with relief as the bells rang out and they knew their menfolk would be coming home.  All day long I wore this pin, which belonged to my grandmother and bears the insignia of the Royal Army Medical Corps, in which her husband served before, during and after The Great War. 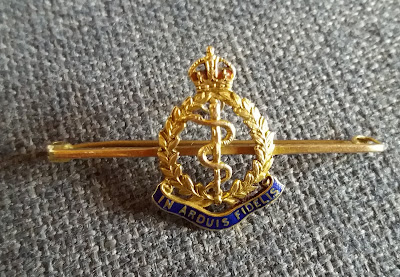