Hello, thank you for calling in.  Are you warm enough?  The temperature here is six degrees Celsius today and I had forgotten what feeling cold is like.  Having seen the weather forecast, we turned on the heating yesterday in readiness, not in the daytime, that seems profligate, which is why I am wrapped up in layers of cardigan and blanket this afternoon, but for a couple of hours in the mornings and another few in the evenings.  I am quite hardy and I know that I'll adjust to the cooler temperatures as time goes on but until then...Goodness Me!

I realise that I'm a bit out of kilter but I'd just like to catch hold of October and set it down here before it drifts entirely out of reach.  It began with celebrations as Tom Kitten reached his first birthday.  I suppose we shall always begin October with celebrations now.  On the day itself he went out for lunch with his mother, his great-grandparents and myself, four generations of us all together.  What a lucky boy he is.  My gifts to him included a jacket and hat which I knitted for him in Drops Cotton Merino, a yarn which is soft and smooth to use and has a lovely drape.  I recommend it. (My other gifts included a pair of teeny tiny shoes which were so expensive that I feel sure they must be made of gold!) 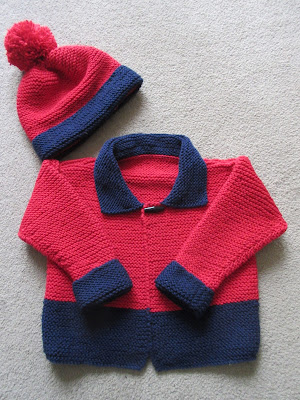 The following day I drove to Ironbridge Gorge to visit an art exhibition.  It poured with rain all day but as I arrived at 4pm, the sun was trying to come out and the light was dramatic, showing up the greens of the Gorge.  I stood and hastily snapped a photograph on my 'phone. 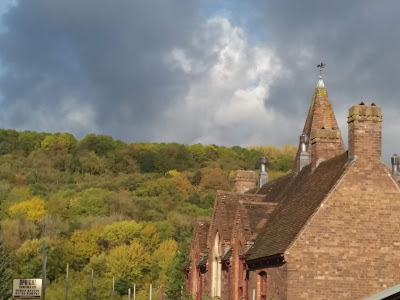 Inside the exhibition room I found my friend Andy Smith and his paintings of waterfalls.  Can you hear the water? 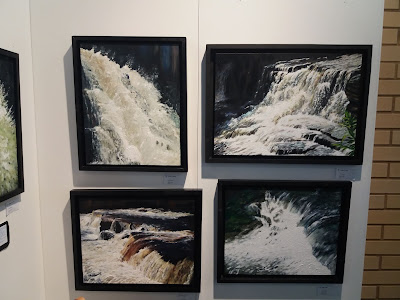 I spent about an hour there and when I came back outside, the sky was unpunctuated blue and the golden light just about took my breath away.  I decided not to go straight home and instead drove a little way along the Gorge to Ironbridge where I went for a little wander by myself. 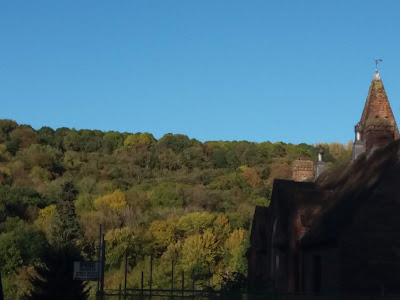 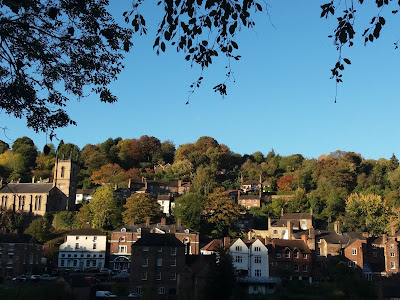 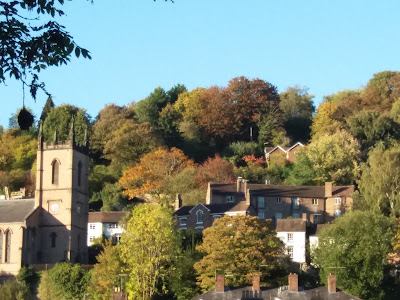 I don't live far away from the little market town of Wellington which holds a free arts festival in October and that evening I attended my first event, a talk about Patrick Bronte, father of Charlotte, Emily, Anne and Branwell, who was an assistant curate at the church in Wellington early in his career.  The speaker was a museum assistant from Howarth Parsonage Museum, Kathie Mack, and I enjoyed it very much.  (Meanwhile, the Best Beloved was in the pub!)  Over the course of the next week I attended four more events, three plays and an illustrated talk, some by myself and some with friends, most in churches and one in a little theatre.  The festival is funded by a grant from the town council and I think it's an excellent use of money as it makes drama, poetry, literature, art, music and dance accessible to those with even the smallest incomes. 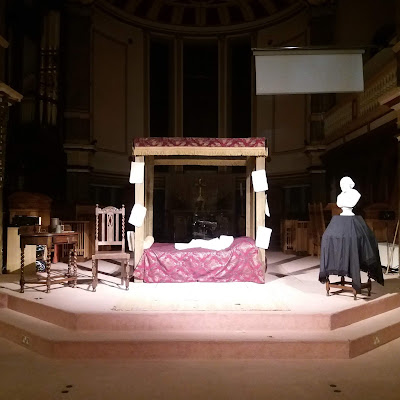 During the third week of October I met a friend for a walk in the park in Ironbridge.  The sun was shining and the air was warm, as the weather had been for most of the month, so it took me by surprise when I realised that it was autumn.  It was the smell which gave it away, the damp, earthy smell which I noticed before I saw the amber leaves on the trees.

The end of the month brought the half term holiday and we packed up our cars and five of us went to Guernsey to see The Mathematician.  It was ten weeks since she had left us and the longest period we had ever been apart.  I had missed her SO much.  Our first day there brought all the weather - wind, rain and hail - but for the next six days the sun shone and we walked on the beach every day.  We ate wonderful food, I read and crocheted and came home restored and refreshed.  I also achieved something I have wanted to do for several years: I sat quietly with the Best Beloved and watched the sun set over the sea.  I found it a spellbinding experience. 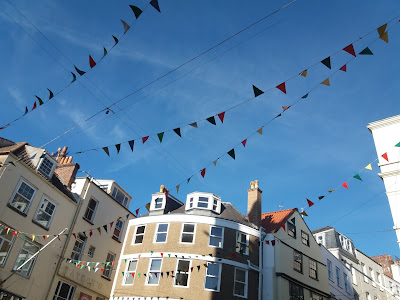 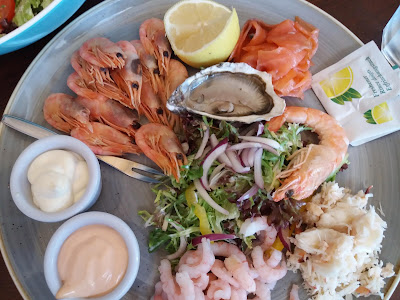 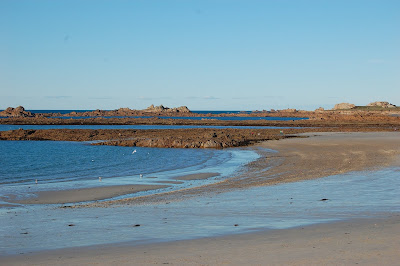 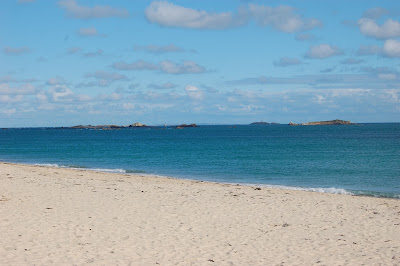 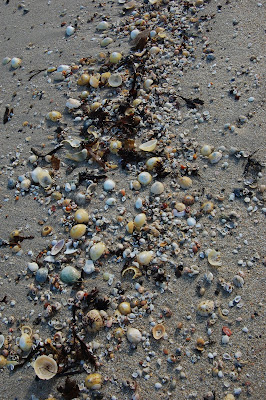 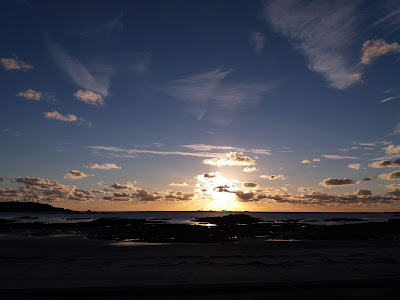 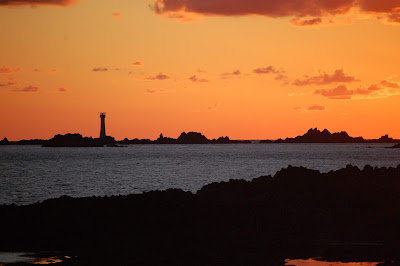 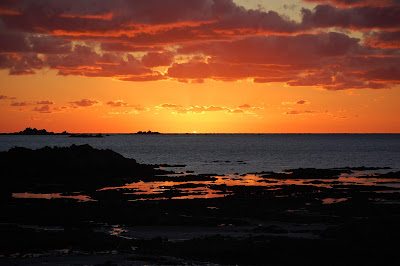 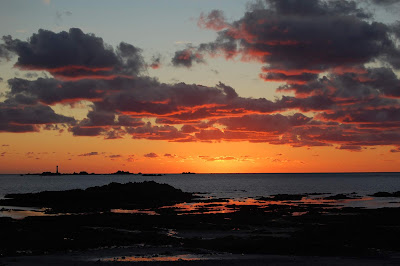 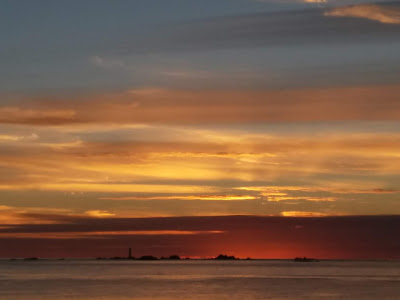 Travelling back to Poole on the ferry, Tom Kitten charmed several other passengers as he toddled around.  One of those passengers, a friendly, white-haired chap with a beard, was Father Christmas, who spends every December in Marks & Spencer in Jersey, at least that's what he told us!

So that was October, a month full of art, golden sunshine and family togetherness which passed so busily that I almost missed my favourite season.  When we returned at the beginning of November I found that the trees were wearing their best autumn finery, vivid shades of red, yellow and orange which exploded like fireworks. Autumn had burst open while I was away and I had almost missed it.