Hello, thank you for dropping in here, you are very welcome.  The sun has been shining for the last few days, the temperature has been unseasonably mild and it really hasn't felt like February - it certainly hasn't been Pluviose.

So, a fortnight ago the Best Beloved and I packed up the car and drove off to Cumbria for a long weekend.  After our holiday in the Lake District last August I felt that there were more places which I wanted to visit, but we had run out of time, so the Best Beloved suggested that we spend a few days there over my birthday.  We booked a tiny cottage on a working farm just outside Hawkshead, basically one room with a separate (rather glamorous) bathroom and a gallery bedroom.  £291 was the price for three nights, much more extravagant than our usual £70 one-night-stay in a Premier Inn at this time of year but we wanted a proper treat.

The journey there went smoothly until the Best Beloved decided to ignore my directions.  I don't know what he was thinking!  I didn't learn to drive until several years after we met and consequently, he drove and I navigated, a pattern we have maintained ever since on long journeys because I became a bloomin' good reader of maps!  So, with the Ordnance Survey map open on my lap, when I said, "Turn left by the Drunken Duck," I was surprised when he ignored me and carried on straight ahead BECAUSE THE SATNAV TOLD HIM TO!!!!!  Silly man.  We ended up driving down a very, VERY narrow lane (I was holding my breath) and then he stopped the car because he thought we had arrived at the right place.  I didn't.  We couldn't find the cottage, or even the right farm - we found A farm, but it wasn't THE farm.  We asked a farmer and knocked on the door of another house and asked.  Nobody could help us.  The Best Beloved went for a walk along the lane to try to find the cottage, in vain, so after half an hour of looking, during which time I was becoming increasingly anxious about being lost in the middle of nowhere with darkness approaching, I rang the booking company and a very nice woman said that she would drive out to meet us and show us the way.  "You sound a bit distressed," she said.  The Best Beloved then decided to drive further along the very narrow lane, which he really should have done to begin with, and then I saw the sign for the right farm, the sign which I had asked him to look for and which he was adamant that he had found but which, it turned out, he actually hadn't.  As he drove up the track to the cottage, I rang the booking company, apologised profusely and told them that we had found the right place; it's a good job they couldn't see that I was blushing but I think they could hear the embarrassment in my voice.

It wasn't a good start.  Nor was the fact that the cottage was chilly as the heating hadn't been put on in advance of our arrival, but we soon fixed that and the Best Beloved redeemed himself by lighting the stove, using the wood we had brought with us because the promised "complimentary basket of logs" was notable by its absence.  A couple of hours later, warmed up and with a large glass of wine inside me, I felt very relaxed... until I went to cook dinner and discovered that there was no chopping board.  I really can't think of any dinner I make which doesn't begin with a chopping board.  I peeled the potatoes and cut them in my hand very carefully, put the oven on to heat up while they cooked and twenty minutes later, my cottage pie was ready to go into the oven, which is when I discovered that the fan was circulating cool air.  (I had cooked the meat base at home the previous day and we had taken it with us.)  It was another disappointment and although the Best Beloved sorted it out, not without difficulty, and we eventually ate a lovely hot meal, I had distinctly lost my sparkle.  I wondered what else would go wrong.

The answer to that question was apparent the following morning, my birthday.  In our house, birthdays always begin with breakfast together, no matter how many or few of us there are, and that breakfast is always warm croissants with butter and jam.  However, there was no jam, the Best Beloved had forgotten to pack it!  I thought he was joking but he wasn't.  At least there was plenty of Earl Grey tea.

So, after a leisurely morning we set off for Ambleside in thick grey cloud and showers to tick off the first place on my list: The Armitt, a library, museum and gallery which is, according to its website, "devoted to preserving and sharing the cultural heritage of the Lake District".  It is a fascinating place and I spent a very happy couple of hours there.  Downstairs there are three galleries, two of which were filled by an exhibition  entitled "Beatrix Potter - Image and Reality".  If you came here hoping to see images from her children's books you would be disappointed, although her own first editions of those books were on display, but the exhibition is about other facets of her life.  Beatrix was a businesswoman, farmer, estate manager, conservationist, sheep breeder and scientist as well as an artist and storyteller and she bequeathed her botanical drawings and watercolours to The Armitt.  There were beautiful watercolours of Roman artefacts displayed as well as many intricate depictions of fungi (she studied mycology in depth for ten years).  On our way out, I chose some postcards and the Best Beloved bought them for me for my birthday - at £3.50 I think I am a bargain! 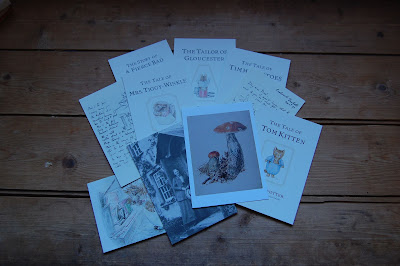 Afterwards, we drove to Hawkshead.  Now, the problem with going away for a weekend in February is that too many places are closed.  I would really like to visit the Beatrix Potter Gallery in Hawkshead, which houses more of my heroine's artworks and manuscripts, but it was closed until half term, as was the Grammar School which educated William Wordsworth.  However, the Sun Inn was open and there we found a very warm welcome, good local gin and a delicious celebratory lunch.  I'd like to return to Hawkshead, but I can't help the fact that my birthday is in February - although my children have suggested that I simply move my birthday to the summer, like King George II did!

The following day was bright and sunny and after another leisurely breakfast (scrambled eggs and smoked salmon on toast, the man knows how to spoil me when he tries) we drove to the banks of Coniston Water to visit Brantwood, the home of John Ruskin.  Do you know him?  He was an extraordinary man, an art critic, a collector, an artist, writer, thinker, philosopher, philanthropist, social critic, conservationist... I really don't know how to describe him.  Born in 1819, he developed a love of mountains whilst travelling in Europe as a young man and bought this house in Coniston, sight unseen, in 1872, spending the rest of his life renovating and expanding the house and extensive gardens.  When he died in 1900 his family was offered a burial in Westminster Abbey but they declined the offer because Ruskin had been adamant in his wish to be buried in the churchyard in his beloved Coniston.  In the summer it would be easy to spend a whole day here exploring the gardens as well as the house. 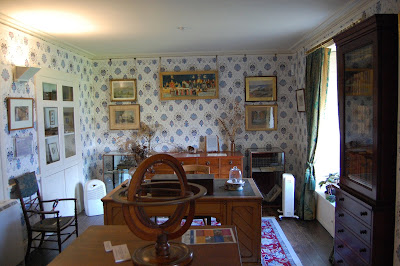 This is Ruskin's study, the engine house where he worked every morning.  He liked to begin before the post was delivered and we were intrigued to read that it arrived at 9.30am and 5.30pm! 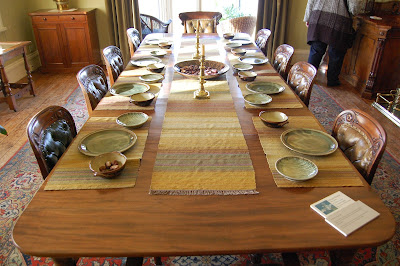 This is the dining room where Ruskin dined with guests including Holman Hunt, Kate Greenaway and Charles Darwin. 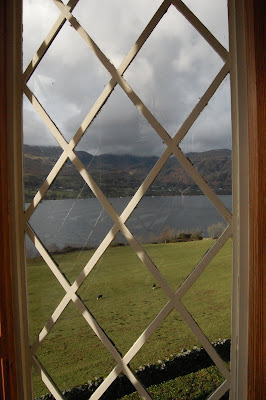 One of Ruskin's first building projects was a turret, which was built to adjoin his bedroom.  In his later years, especially when he was too frail to work, he would spend hours sitting in this turret and looking out at the landscape. 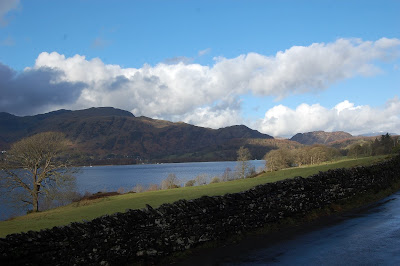 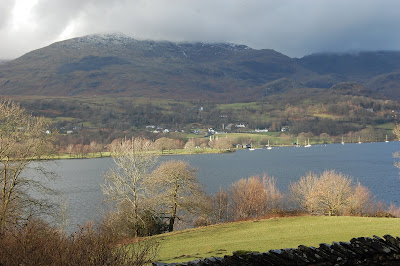 I really like John Ruskin.  I was especially pleased to discover that he collected stones, fossils and shells as well as paintings - more than 2,500 shells!!  I pointed this out to the Best Beloved and he laughed.  I shan't feel the slightest twinge of guilt about my own collections in future!

I'm sorry that I don't have more photographs to show you.  The Best Beloved was in charge of the camera and I suppose that we were so busy enjoying ourselves that he just forgot to take pictures, and I really can't be cross with him for that.  I can, however, show you this postcard, another birthday treat from the Best Beloved, Ruskin's own self-portrait. 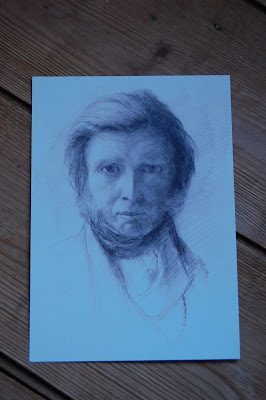 After leaving the house we went to the café for a pot of Earl Grey and a slab of cake.  I am happy to confirm that the vegan fruit flapjack is delicious, although not cheap, but the staff don't seem to know how to make tea properly (it was stewed). 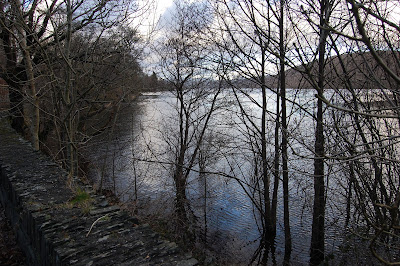 Afterwards, we drove all around Coniston Water, stopping wherever we fancied and noting how much higher the water level was than it had been last August, before making our way back to the cottage to light the fire, eat chocolate and watch a film together - more treats.

The following morning we packed up and drove home.  I don't know how the Best Beloved is going to top it next year!