Hello, thank you for calling in.  I am very tired today because I was up late last night, partying: it was our annual Eurovision Song Contest party.  I know that such parties have become very popular in recent years, but we have been doing it since the 1990s.  Get me, ahead of a trend! 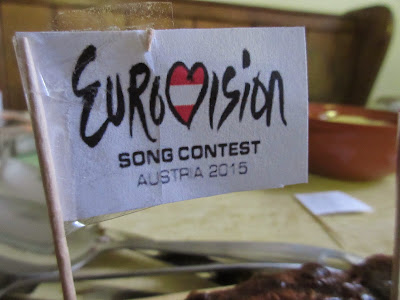 If you are not familiar with this annual event, it began in 1956, when seven European countries participated.  The UK joined the party in 1957 and the first one I can really remember is 1974, when seventeen countries took part.  Olivia Newton-John was our chosen representative and one Saturday evening in February, she sang six songs in a special tv programme.  Viewers sent in their votes on a postcard and the winning song was announced the following Saturday.  How quaint that seems now!  No telephone votes, no internet votes, just the good old Royal Mail. (I have just told The Mathematician about that and she is killing herself laughing.)  We chose Long Live Love, and by the time the contest was held three months later, we knew all the words, the song having been played to death on the radio and television, and we knew that it was one of the favourites to win.  You can have a listen here if you'd like to.  Glory, glory, hallelujah!
So, fast forward to the big night in May and the contest was held in Brighton.  I was staying with my grandparents and being of very tender years, I had to go to bed before the end.  So it wasn't until the following morning when I saw the newspaper headlines that I discovered that Olivia hadn't won, despite a terrific performance.  What a disappointment!  The winners, of course, were an unknown Swedish group called ... ABBA!
And so began my love affair with Eurovision (and ABBA, but I'll save that for another time).  I can sing all the words to "Ding A Dong" by Teach In, who won for The Netherlands in 1975; I can do all the dance moves to Brotherhood of Man's "Save Your Kisses For Me", our winning entry from 1976; I can sing "Rock Bottom" by Lynsey de Paul and Mike Moran, our second-placed entry from 1977.  I loved it - please remember that I was still at primary school.  It's OK to love pop music when you are at primary school, isn't it?
I fell out of love with Eurovision in the 1980s - I was growing up and I had far better things to do on a Saturday night than stay in and watch the television.
By the 1990s, I had small children and no babysitter, so watching television was just about all I could do on a Saturday night.  Michael Ball, 1992, "One Step Out Of Time" - terrible song, why on earth did we select it?  His performance was brilliant, though, he did his best to make a silk purse out of a sow's ear and there I was, watching Eurovision again.  In 1994 we got together with two other families and decided to have a Eurovision party.  Twenty-five countries participated and we had a dish or a beverage from each of them - bear in mind that we didn't have the internet for research then, it was much more difficult but we had a spectacularly successful evening.  Frances Ruffelle represented the UK and came tenth but nobody really cared who won that year because the interval act blew us all away: it was Riverdance.
We have had a Eurovision party every year since.  Sometimes, our children's friends have attended.  We always have score sheets - we used to have to make our own and we devised our own categories because let's face it, it's about so much more than the song!  We gave points for choreography, costumes, amount of glitter...and there's always an extra ten points for a gold bikini.  However, I can be quite moralistic and I deduct points for "slutty costumes" and inappropriate dance moves.  I deducted quite a lot of points from Poland in 2014 (and confiscated the Best Beloved's spectacles).
As the contest grew and grew and so many countries wanted to participate that semi-finals were introduced, it became unrealistic to represent every country in food and drink, especially as there are now just two of us providing the meal, so now we do a themed buffet with dishes from the host country.  Here are some pictures of last night's Austrian fare - 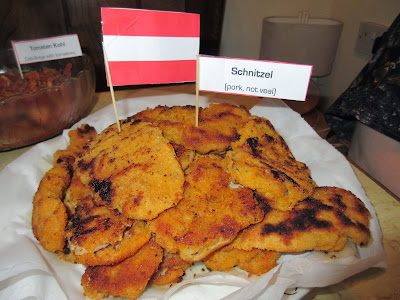 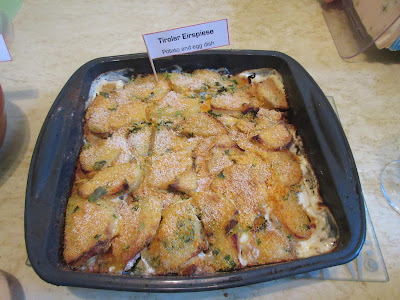 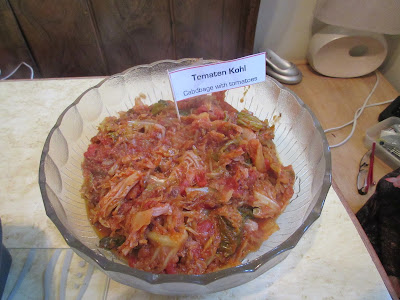 Tomaten Kohl, another hot dish, tomatoes and cabbage with caraway seeds and allspice... 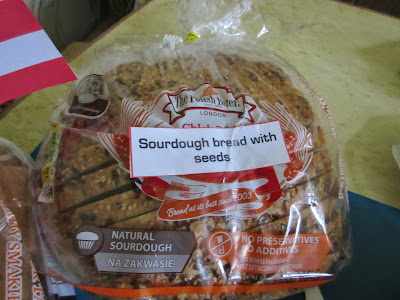 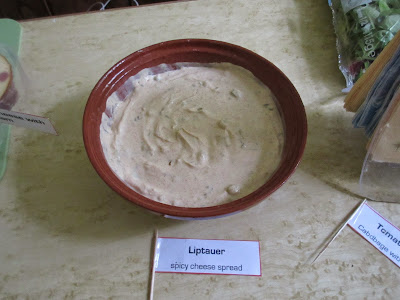 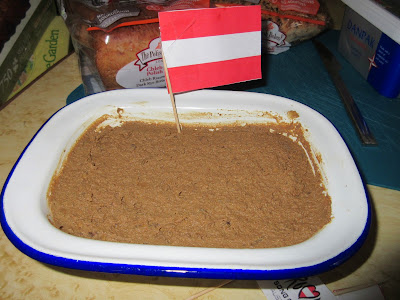 This is a sort of pate, a "bread spread" made of chicken livers, onions, garlic and paprika...﻿
We do get ridiculously excited about this, researching dishes online and putting our menu together and along the way, we learn about the food and culture of other countries.  We found it difficult this year to find suitable recipes.  Which leads me to the next picture, which I am showing you in the interests of authenticity.  Here is The Burnt Thing - 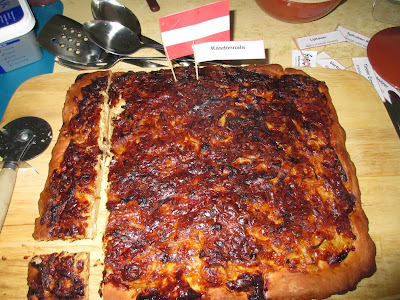 This is kasdonnala, a sort of cross between a pizza and a quiche.  It took us ages to find a recipe and when we did, it was in German, of which I have none, and we used the computer to translate it.  This meant that it wasn't very easy to follow!  I cooked it for the recommended time and was really disappointed when I took it out of the oven because, as you can see, it looked burnt.  I could have cried.  I toyed with the idea of putting it straight in the bin but was persuaded to take it with us...and it all went!  It really didn't taste burnt and everyone loved it.  Lesson learned.  I think I'll be making it again.
We printed ready-made score sheets off the computer - 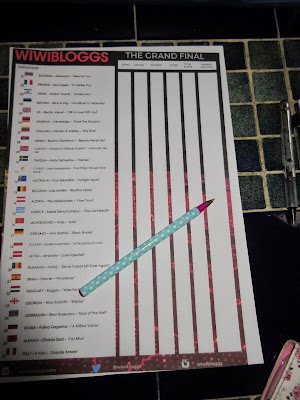 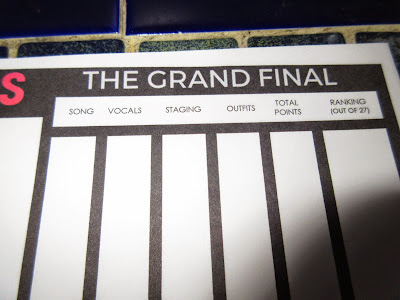 As always, we had a fabulous evening: good food, plenty of wine, super company and a very entertaining (and very long) show on the television.  Again, the UK gained very few votes, again, the Balkan countries all voted for each other and again, Sweden came up trumps.  They really are good at this - remember Charlotte singing Take Me To Your Heaven in 1999?  I do, and no, I didn't just look that up, I really do remember it.  If you were here, I could sing it to you.
So thank you to Myra for hosting our party, to the European Broadcasting Union for remaining committed to uniting countries through music, to Austria for hosting the contest, to the forty countries who took part this year (although thankfully, only twenty-seven sang in the final), to Electro Velvet whose cracking performance deserved more than five points and to the very winsome Mans Zelmerlow who deserved to win.  You can watch him here.  See you in Stockholm next year.
Love, Mrs Tiggywinkle x
Posted by Mrs Tiggywinkle at May 24, 2015